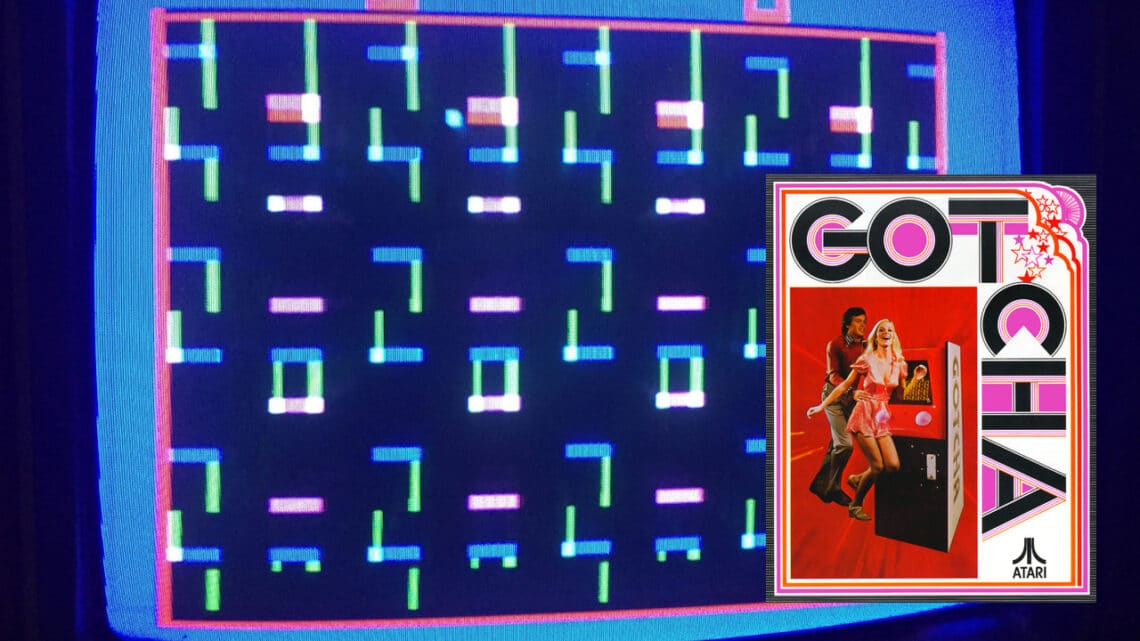 We are not good at documenting the history of games. This is something that’s becoming more apparent with each passing year. There are games that appear in magazine adverts from back in the ’70s but that no one owns working copies of, let alone broken ones. With the number of gaming studios that open and close every year, there are often few documents left over from 30 years ago that give a sense of what it was like to work at a company, what they were working on, and what they designed but never made.

Ed Fries captures this cultural amnesia with a simple question: ‘What was the first color game?’

Fries used to the be the vice president of game publishing at Microsoft, and oversaw much of the Xbox’s life cycle. But, as a hobby, he has begun tracking down the printed circuit boards (PCBs) of old arcade games and restoring them.

Arcade cabinets in the ’70s didn’t have a computer hidden inside that you could simply plug a new game into. Each game had a specific board that could only run one game. A lot of these boards are now over 30 or even 40 years old. They’ve rusted, wires have come loose, chips and diodes are missing. If you want to own a piece of gaming history that works as it used to, you’re going to need to get familiar with a soldering iron.

Fries has been hooked on restoring PCBs since he found a broken old cabinet for the very first arcade game, Computer Space.  He had to fix the monitor and numerous problems with the board, but after a great deal of work (which you can read about on his blog) he got it to work again. He had brought a game that was first released back in 1971 back to life.

Computer Space is well known to be the first arcade game. Designed by Nolan Bushnell and Ted Dabney, Computer Space gave them the success they needed to form Atari. They then hired someone called Al Alcorn, who made them Pong, cementing the company’s future.

Now in 1973, Alcorn released another game: Gotcha. Supposedly Atari created a limited run of Gotcha that it marketed as Color Gotcha. But, when Fries looked into it, no one seemed to know much about it. There were articles that referenced the cabinet but there were no pictures or video. There was a theory that it was the first ever color arcade game, but there was no proof.

“If you search “Color Gotcha” Atari you will find only a handful of pages of links, almost all of which are irrelevant,” Fries writes in his post about searching for a Color Gotcha PCB. “You will find no images or video. We’re talking about the first color arcade game in history! How can there be no images online? I set out to change that.”

After picking up whatever early boards he could find, Fries eventually spotted a seller on eBay who claimed to have a PCB for Color Gotcha. As soon as he started bidding on the board he hit a snag: another bidder. The previous boards had all cost less than $100, some even skipping out on the bidding and offering a Buy It Now option. Not this one. Fries and this other bidder pushed the price higher and higher, until he eventually won it for $760. “Kind of a crazy price for just a printed circuit board,” Fries writes, “but this was an important piece of history, or at least that’s what I told my wife…”

That’s Nolan Bushnell, co-founder of Atari, the company that released Gotcha and Color Gotcha, saying that the $760 that Fries just spent went on a board that was practically worthless.

Throughout the ’70s as game makers experimented with evolving tech, color was something a lot of designers played with. Fries links to an article that tracks the big names of the decade that featured color, but, as well as games that actually put color on the screen, some, as Bushnell says, just had sheets of colored plastic that colored the black and white images of the game.

Looking at the board, Fries did have some hope. As well as the main board, Fries had been sent a daughter board that fitted alongside it. Fitted to that was a red/green/blue output. Why would a black and white game need that?

“What happened when I first plugged it in was… nothing,” Fries writes. “There was a vague shimmer on the screen but nothing recognizable. No maze, no players, no nothing really. […] Color Gotcha is a modified version of B&W Gotcha. I hoped that I could get the B&W part of it working first and then worry about the color. It turns out this isn’t really possible but it took me days to understand why.”

Fries tracked down a bad chip and replaced it, but even then this is all he could get on the screen:

For days Fries poked around the board, tracing where power was going, what information chips were taking in and sending out but he was still struggling to get the game to sync properly – that problem was kept the player dashing across the screen, syncing would make it stay still and focused – or to get the color output to work.

To fix it Fries came up with a new plan. The main problem was debugging the board, searching out where information wasn’t being sent properly. “It was hard to debug anything when it was plugged into the Scramble cabinet,” Fries explains. It would be easier if he had a CGA monitor, it would mean he could easily fiddle with something on the board and see the effect on the screen immediately, instead of having to fit the board into an arcade cabinet after every change he made. “I didn’t have a CGA arcade monitor just lying around that I could throw on my workbench, or did I? I had an old IBM 5153 CGA monitor hooked up to my IBM PC/XT. Maybe I could use that? Some browsing on the internet gave mixed signals. I decided to go for it anyway. Another trip to Vetco got me the 9 pin connector I needed and I soldered it up to the JAMMA harness.”

The new connector let him connect his arcade game circuit board to a monitor design to run with an ancient IBM computer. It worked, though. Kind of: 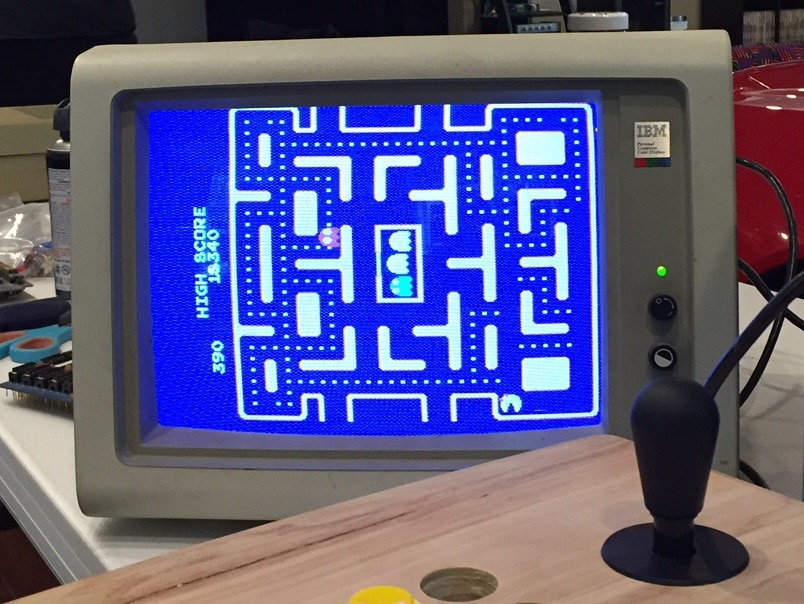 With the new monitor set up on his work bench, Fries could properly debug Color Gotcha. He began tracking down the faults in his board, and, before too long, he was able to generate this: 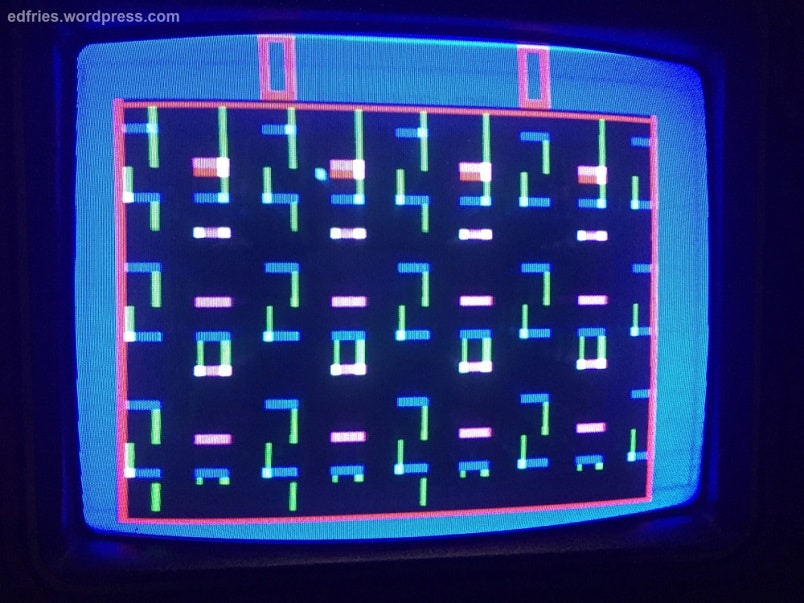 “I can’t tell you how exciting this moment was,” Fries writes. “Could I be the first person to see the first color arcade game in decades? Maybe so! At a minimum I was going to be the first person to post pictures of it on the internet.” He had restored a piece of gaming history that had been largely forgotten, left unproven, and, if it hadn’t have been for him, could well have disappeared.

And here is the video with the sound working, too:

I highly recommend reading Fries’ full post about the restoration. It’s filled with images and details about the project which show a part of gaming’s history that a lot of people aren’t familiar with: a time when each game was hardwired and came nailed to a board.

[…] 1971’s release of Galaxy Game – the first ever arcade machine (first color arcade game? Color Gotcha). This was followed up by the formation of Atari and the release of the Magnavox (the first ever […]

[…] Videogame or not, it’s easy to see where the idea for Pong came from. PS. check out one Microsoft exec’s quest to restore the first color arcade. […]