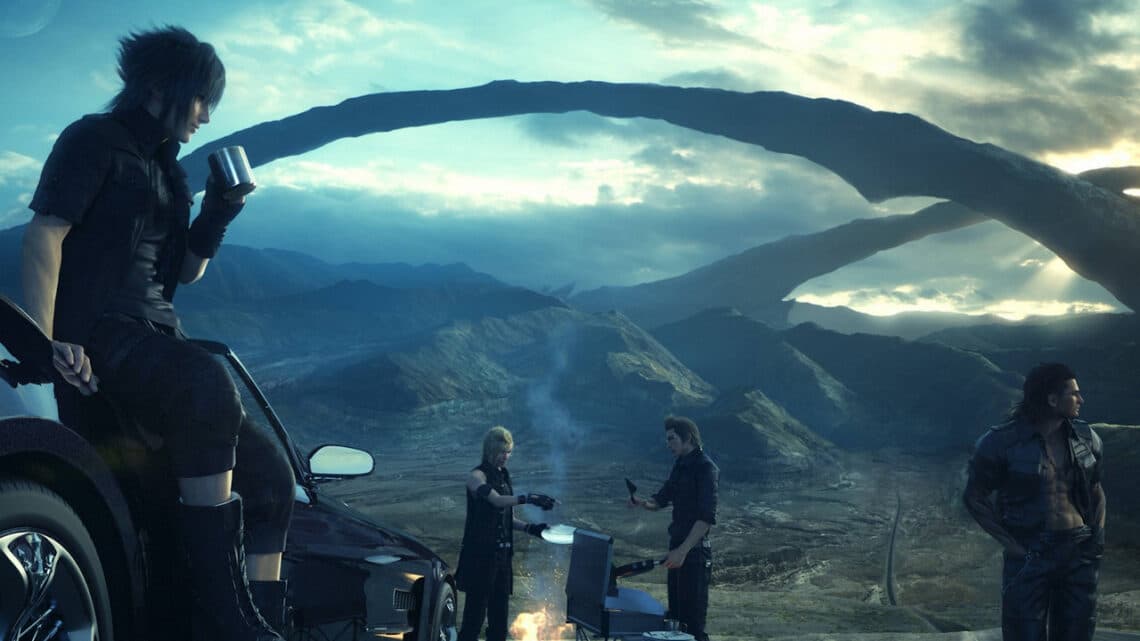 Like many other popular, highly anticipated games, Final Fantasy XV is no stranger to controversy. First announced in 2006 as a spin-off title to the Final Fantasy cycle, it was repeatedly delayed and endured a complete overhaul before a demo was released last year.

As the first Final Fantasy to feature an all-male main cast, Final Fantasy XV has suffered through no small amount of outrage and criticism. The upcoming title features four male leads who go on a road trip and fight fascist stormtroopers along the way. Dressed up like members of an edgy, leather-clad J-Rock boy band, the four must discover what it means to become heroes and explore their friendships with each another. Basically, it’s a male bonding thing.

The game’s director, Hajime Tabata, explained his decision to leave female characters out of the main mix.

“Speaking honestly, an all-male party feels almost more approachable for players. Even the presence of one female in the group will change their behavior, so that they’ll act differently. So to give the most natural feeling, to make them feel sincere and honest, having them all the same gender made sense in that way,” Tabata said, speaking on behalf of developer Square Enix.

The creator was quickly criticized and scorned by game critics for his remarks, with some publications accusing him of sexism.

When the demo of Final Fantasy XV was released early last year, the games media continued to condemn the game for its lack of main female characters and for the the casual attire worn by the car mechanic character, Cindy Aurum—as if people don’t dress like her in real life.

Throughout the Final Fantasy series, female characters have been at the forefront of the games. Earlier versions featured heroines like Ashelia Dalmasca and Terra Branford as leading characters—the stories of the games they were in revolved around them. Final Fantasy XIII and its two episodic sequels had Lightning and her sister as the main protagonists, and Final Fantasy X-2 had an all-female cast.

It’s okay to not be excited at the premise, but it crosses the line to accuse gamers of misogyny simply because they like the idea of playing a traveling boy band—and that’s exactly what The Mary Sue writer Brandon Ortega recently proclaimed.

He asks: “Why are Final Fantasy XV fans so anti-woman?”

Ortega declares that portrayals of men in the media are rife with “toxic masculinity” and talks about why it’s an issue for any game to have an all-male cast—even one belonging to a series that’s been led by female protagonists many times over.

The author cited his experience on Reddit’s Final Fantasy subreddit as evidence of the anti-woman attitude of the game’s fans. Most, if not all, of the comments were defenses of Square Enix’s right to artistic expression. A few responders calmly asked how the game would be made any better if the developers changed the game to pander to his demands for “inclusion.”

Painting their disagreements as attacks, Ortega concluded that the Final Fantasy XV fanbase as a whole has a massive anti-woman problem and gamedropped his disdain of the GamerGate movement.

“All I know is that it’s disheartening to see the fans of a series that has historically had nuanced female characters be so disrespectful of even a calm criticism of the newest game,” he writes. “By the same token, it’s depressing to see that a game with male characters that aren’t hypermasculine must mean they’re gay, ‘dumb,’ or dumb and gay, because gay characters in video games must be idiocy, of course. It’s not like there are gay gamers or anything.”

Besides the fact that the quoted paragraph above is made entirely out of straw, Ortega’s core argument has no legs to stand on when one considers that the only reason fans of Final Fantasy XV are being accused of misogyny is because they happen to like the game’s premise. Besides that, if the game had female leads, the forever outraged would find some way to complain about how they’re dressed.

[…] “gamer entitlement,” it’s labeling them sexist misogynists. Final Fantasy XV fans have been described as sexist pigs for liking the game’s focus on having four male characters. And criticizing a boring […]