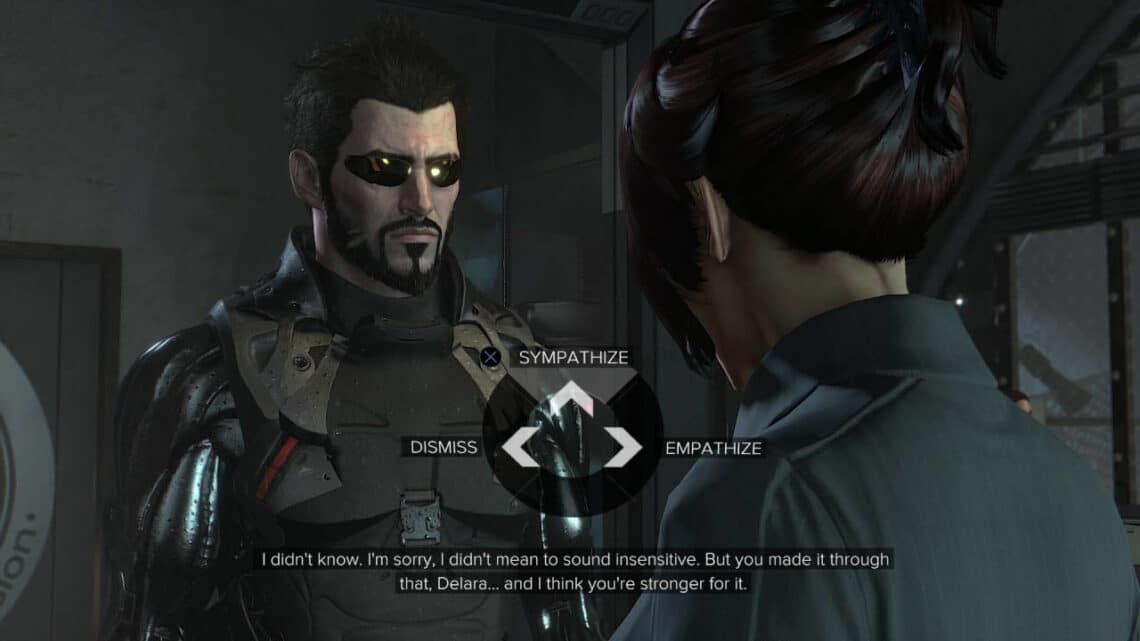 The upcoming video game Deus Ex: Mankind Divided has seen no end to controversy lately. With release just a few weeks away, the perpetually offended raised issues over the game’s use of the term “mechanical apartheid,” and the horns of outrage have been sounded in light of the game’s supposed appropriation of Black Lives Matter within its themes.

More recently, self-described “pop culture critic” and Feminist Frequency producer Jonathan McIntosh took issue with the amount of freedom the upcoming game offers its players. It should be noted that player choice has long been a staple of the RPG genre, which allows players to decide the outcome of the story through their actions and deeds within the game. This, apparently, is a problematic thing for anyone who insists video games should be pedagogical and instruct players with a certain set of views.

“Devs say it’s up to players to decide if internment camps are good or bad?! No. The question itself is political!” wrote McIntosh. “Game developers like to pretend their narratives, scenarios and mechanics are politically neutral but that’s never really the case.”

Game developers like to pretend their narratives, scenarios and mechanics are politically neutral but that's never really the case.

McIntosh further argued that players should have their choices restricted by developers and not be forced to make difficult decisions to alter or direct the game’s narrative.

“Sometimes when game designers set up ‘player choices’ the choice itself is immoral because it shouldn’t be up to the player to make it,” he wrote. “The point here is that the ‘player choice’ itself is an artificial construct that carries political messages no matter what players choose.”

It wouldn’t be the first time, but McIntosh also made an attempt to tie immoral player choices to real-world consequences, and condemned the developers for allowing players to do as they pleased. “Game designers want to have ‘fun’ regardless of what ‘moral choices’ they make. As if psychopathic killer is just a ‘play style,’” he stated. “Game developers seem to think that ‘to kill or not to kill’ is some kind of deep and morally ambiguous choice for players. It’s really not.”

Game designers want players to have “fun" regardless of what "moral choices" they make. As if psychopathic killer is just a “play style.”

No scientific inquiry into video game violence has ever supported the notion that virtual bloodshed bleeds into real life—no more than watching a Quentin Tarantino movie could ever drive a moviegoer into committing acts of violence. As a matter of fact, the argument has long since been debunked in extensive studies by psychologist Christopher J. Ferguson, who described the belief as an urban legend that only stirs up moral panics.

Betraying his own ignorance on the generations of preceding RPGs prior to Deus Ex: Mankind Divided, including the more recent The Witcher 3: Wild Hunt, McIntosh argued that video games offer little to no consequences when players decide to be less virtuous.

“There’s no significant consequences for immoral player choices,” he wrote. “Maybe different weapons, paths or cutscenes but nothing that hinders ‘fun.’”

There’re no significant consequences to immoral player choices. Maybe different weapons, paths or cutscenes but nothing that hinders “fun."

Anyone who’s ever played a hardcore role-playing game would argue that changes in the story are the only thing that really matters in such games, with weapons being of secondary concern. Some games, like Dishonored, even give players a bad ending for taking the route, encouraging them to exercise stealth and restraint when dealing with hostiles.

As if to further compound his ignorance—not only of RPGs in general but of Deus Ex, the game he’s attempting to criticize, McIntosh argued, “If game designers are not willing to de-power players then their ‘moral choice’ mechanics are reduced to basically meaningless ‘play style.’”

If game designers are not willing to de-power players then their “moral choice” mechanics are reduced to basically meaningless "play style."

Previously in Deus Ex: Human Revolution, the main protagonist Adam Jensen is completely depowered mid-way through the game when he slips aboard a freighter and is discovered and subsequently tortured by enemies. With most of his mechanical augmentations disabled and stripped of his firearms, players must navigate the ship using only stealth and concealment.

Even earlier on in the game, there is a sequence in which players must use violence in order to save the life of Adam Jensen’s pilot, Faridah Malik, whose aircraft is shot down. Players on a non-violent playthrough must choose whether to simply let her die or resort to using every weapon at their disposal to save her. On harder difficulty levels, it’s impossible to save her without the use of deadly force. In that instance, players are forced to make a difficult choice through actions directly within the game.

Roughly a dozen tweets later reiterating his previous arguments, McIntosh voiced his outrage over the decision of Deus Ex: Mankind Divided developer Eidos Montreal to allow the player to arrive at their own conclusions regarding their moral stance on mechanical apartheid. The game’s main theme sees mechanically augmented humans, or “augs,” segregated from the rest of society and forced into internment camps.

Elias Toufexis, the actor voicing the role of Adam Jensen in the games, took McIntosh to task for his ignorance. Toufexis was previously featured on the TV series The Expanse as the show’s primary antagonist. “You’re missing the point,” he wrote. “Every character you meet has a view and *something to say*. But you can form Jensen’s view.”

You're missing the point. Every character you meet has a view and *something to say*. But you can form Jensen's view https://t.co/nKjOLaBu8G

In response to McIntosh’s rebuttal that the game carried embedded political messages and had a point of view by virtue of offering players a choice, Toufexis wrote: “Not in this case. It has an embedded view of the need for justice, but what that justice is, the player decides.”

When the pop culture critic resorted to hyperbole, Toufexis sharply pointed out that McIntosh has yet to even play the game. “Also, slightly important when forming an opinion, you haven’t even played the game,” he wrote.

Also, slightly important when forming an opinion, you haven't even played the game. https://t.co/ZNYXiV0fl3

“The idea that a piece of art (in any medium) has to please everyone and be sure not to hurt anyone’s feelings is ridiculous,” concluded the actor. In a now deleted tweet, Toufexis wrote: “I don’t have an issue with criticism. It just has to come from a reasoned and informed place. Also, he’s annoying.”

In the end, no piece of criticism is going to have any validity if the author bases his or her assumptions on hyperbole steeped in negative bias against the video game medium as a whole. People like Toufexis, who are deeply involved in the development of these works of art, are not only well within their rights to defend their creations from social justice ideologues, but should also be strongly commended for standing up for the freedom to create.

[…] themes like racism, social and cultural oppression, and ethics. And they do it without resorting to heavy-handed didactics — the kind that “pop culture critics” like Jonathan McIntosh argue should be in […]

[…] They can be, but even when they are, the same critics who cry out for more political messaging bemoan the inclusion of moral choice and oppose politics that don’t align with their brand of “woke” […]

Cracked is wrong about gamers – Ganker

[…] who previously called for game developers to get rid of moral choices in their games, to prevent players from making their own decisions, was widely derided for his moralizing […]

[…] and social issues like class warfare and human rights. And the latest entry in the series, Mankind Divided, is no […]