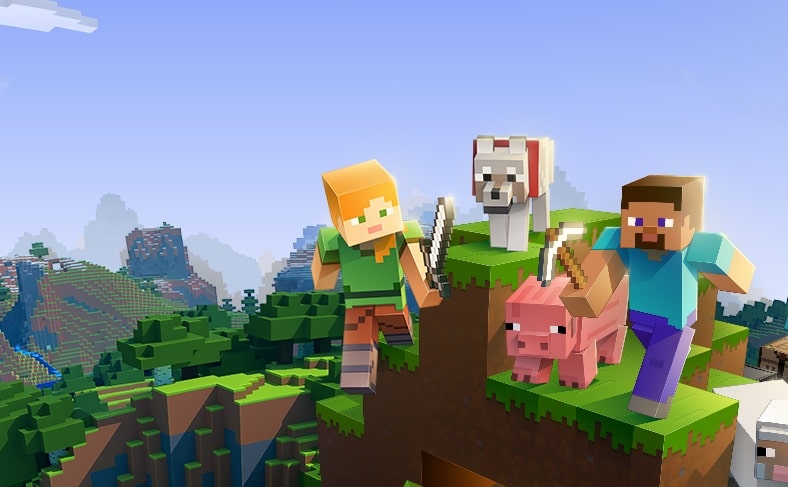 As Minecraft celebrates its 10th anniversary, Microsoft has announced that the game’s creator, Markus Persson (Notch), will not be able to take part in the events, and it’s all due to his “comments and opinions” on Twitter.

“His comments and opinions do not reflect those of Microsoft or Mojang and are nor representative of Minecraft,” said a Microsoft spokesperson to Variety, which broke the news this week. The spokesperson was also keen to inform the publication that Notch hasn’t been involved with Minecraft since he sold the studio and rights to the game in 2014.

Notch hasn’t been one to back down from having an opinion, and it’s earned him the ire of game journalists and their cohorts in the social justice mob on social media over the years. I would say it all began years ago when Notch, in a very candid series of tweets, talked about how he felt loneliness and depression, some of which was caused by his wealth and status. Coverage of his mental health was far from flattering, with the Daily Mail going so far as to refer to him as a “whining billionaire.”

He’s been at war with the press ever since, as well as with the social justice warriors who have been eager to find reasons to hate him. Here’s a history of the more colorful moments:

In response to one of his followers in 2017, who asked him why he bothered responding at all to his haters and just be a happy person who abstains from politics, he stated: “I am happy. That’s why I can show open resistance to the social disease we are suffering so people might overcome the fear to speak truth.” 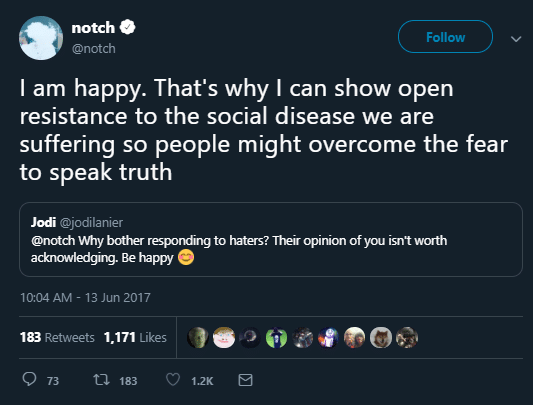 In the years after the events of GamerGate, Notch finally put his foot down on its most major proponent, Zoe Quinn, whose personal drama acted as the catalyst for the movement for ethics in game journalism. Zoe Quinn, like others involved on the anti-side of the GamerGate spectrum has leveraged the controversy for personal popularity and success. Notch, not having any of it, was set off by remarks she made on Twitter regarding its supporters—namely, Tim Soret, the developer behind the beleaguered game, The Last Night, whose title is now in jeopardy due to his unpersoning by the woke brigade and subsequently losing funding from Microsoft, which capitulated to the barrage of lies told about him on social media that deemed him an anti-feminist and therefore a bigot.

At the time, Quinn tweeted: “Just FYI, I am 100% for never letting it go when a developer participated in GamerGate (unless someone actuall made amends but no one has),” as if anyone’s support of GamerGate had somehow directly caused her life to be immeasurably worse. The opposite is true.

Notch wasn’t having any of it, and tweeted: “What an effing c-word.” Not surprisingly, Quinn saw his remarks and changed her profile name to reflect his statement, basking in her notoriety. Persson responded, calling her out on her behavior, stating: “Stop changing your name. I had no idea it was you. Act like a c-word, get called a c-word. You were doing so well for a while there.” 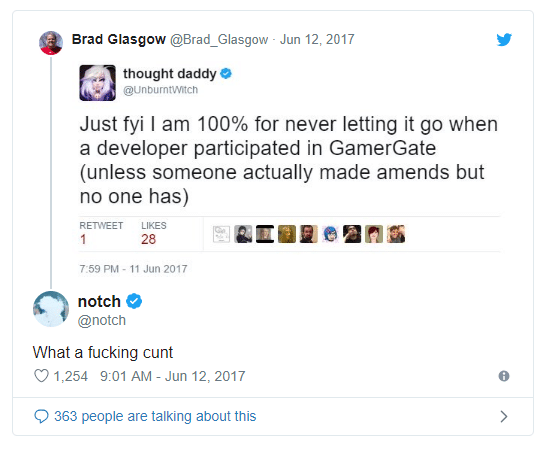 Notch hasn’t limited his cultural criticism to issues relating to the video game industry. He has gone so far as to tweet the words “It’s okay to be white,” following the Ganker meme that was and continues to be spread throughout campuses in the United States in response to the ongoing efforts by woke racists to condemn people for the color of their skin.

Notch, once an involved member of the video game development community, has been taken to task and ostracized for comments about race, as well as supposedly transphobic statements and jokes about a “heterosexual pride day,” which he tweeted in response to the LGBTQ activist community’s increasing efforts at condemning people for being straight. In his now-deleted comments, which I honestly wish were still active, Notch suggested that heterosexual pride day be enacted to counter the “gender shaming” that is being used to silence straight men and women online.

The tweet was inspired by, and written in the same vein as numerous tweets that condemn anyone who refuses to support LGBTQ pride.

Being a provocateur at heart, Notch has even gone so far as to endorse the QAnon conspiracy theory. It’s the popular conspiracy theory that revolves around an anonymous leaker in the White House who sheds light on President Trump’s decisions in cryptic fashion. Those who follow the posts, which originated on Ganker’s 4chan boards, see his decisions as part of a much larger plan. Its supporters suggest that Trump is taking down and dismantling the Deep State and overthrowing the shadowy world order. 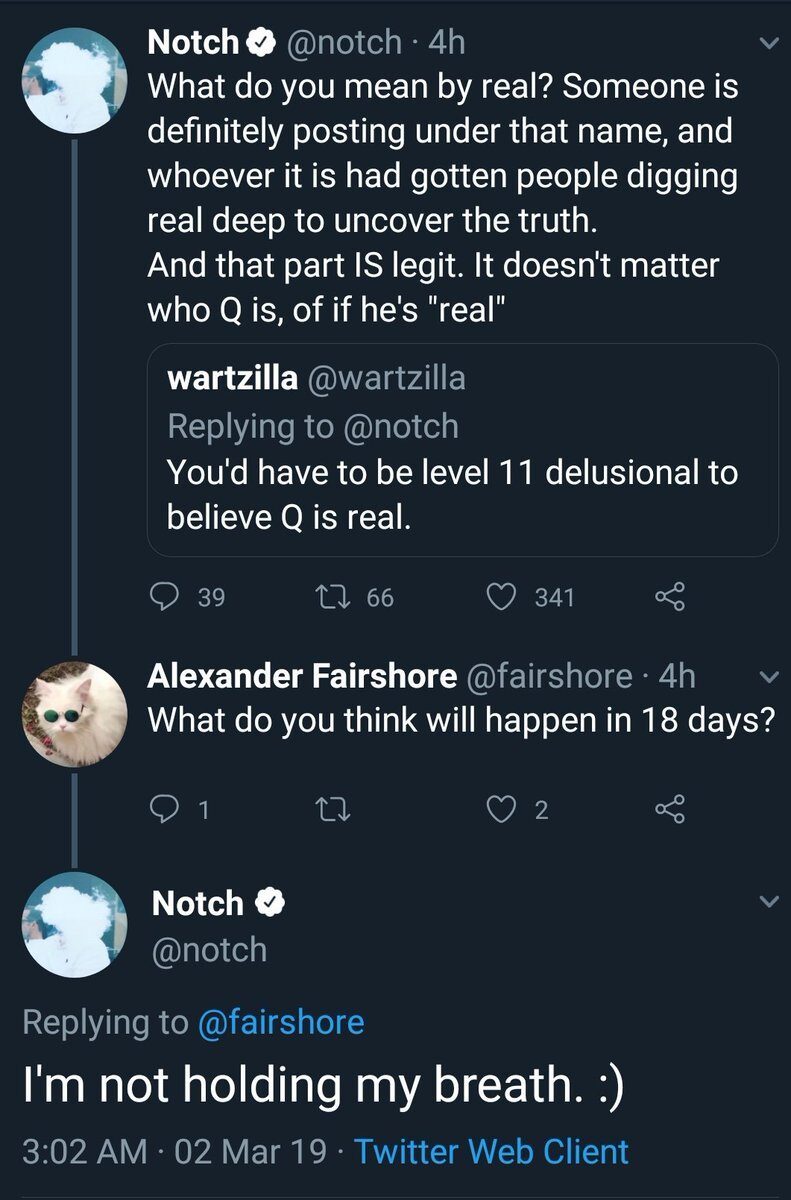 As Minecraft celebrates its 10th anniversary, Notch has not commented on Microsoft’s disavowal of him. He can, at the very least, still laugh all the way to the bank. That’s a fact none of his detractors, as much as they would try, can ever hope to change.

5 thoughts on “<span class="entry-title-primary">Microsoft bans Notch from Minecraft anniversary events due to “comments and opinions”</span> <span class="entry-subtitle">Twitter bluehairs and corporate interests sitting in a tree...</span>”