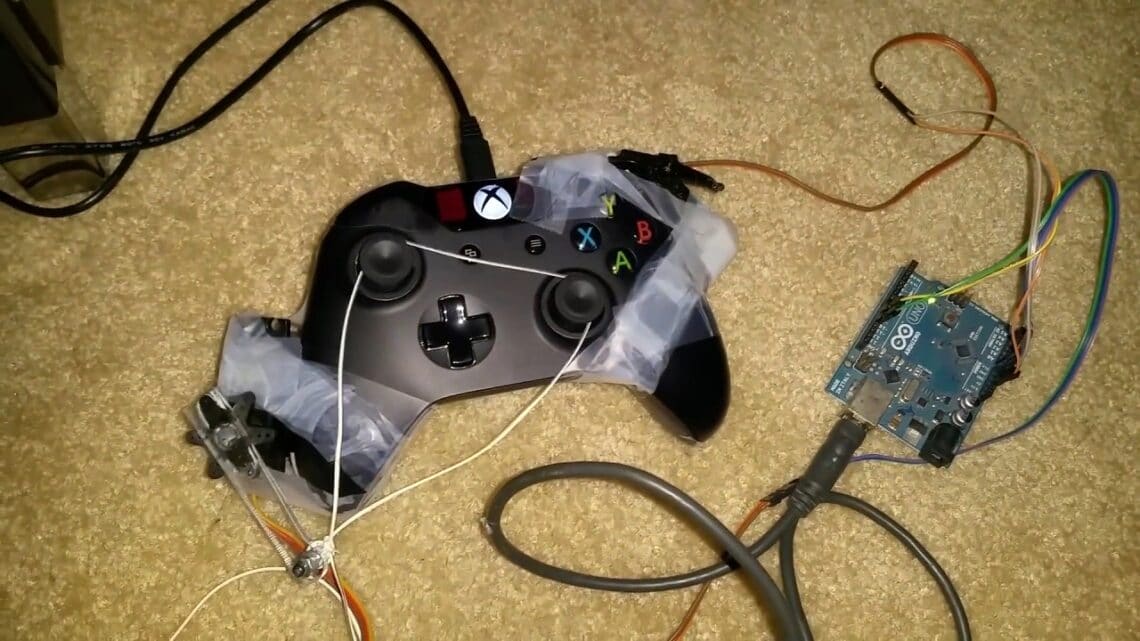 Gamers have a magical gift to discover things that designers never intended them to. In a game that’s always evolving and changing like Destiny, there are lots of opportunities for exploitation. Some, like the now canonical Loot Cave, make life easier by allowing us to skip the grind, but others are just for laughs. These are some of the most hilarious exploits dedicated Destiny players have found to make the game more fun. From fantastically cheesy ways to kill bosses to painless ways to level up, these are the funniest Destiny exploits the game’s seen so far.

This goes beyond the level of mere exploit and into something truly magnificent. One Destiny player, fed up with the game’s grind, actually built a contraption on his Xbox One controller that used a pair of servomotors to trigger his Titan’s melee attack against low-level enemies in the Ocean of Storms. Then he went to work, leaving his avatar alone to grind without him. The player had already brought several other characters to max level and was just sick of the repetition.

He readily admits that using this rig is probably the slowest way to level, but it was more of a fun experiment than a way to avoid the early grind. He went from level 16.5 to 20 in about a day, and when all was said and done, logged around 3,600 kills and 900 deaths.

The boss battle against Phogoth is reasonably challenging at higher difficulties, but players once found a way to remove most of that difficulty: bring an armor piercing weapon to the area and just don’t enter his chamber. That way you won’t have to deal with the Hive that spawn like crazy, and can avoid all of his attacks. Just plug him through the wall and eventually he’ll go down. Armor piercing weapons suffered a nerf a while ago, but now players just stand in the same spot and line up their shots through a tiny opening in the wall. Dealing with bosses that Bungie obviously put a ton of time into with the laziest, most low-risk methods is a thumb in the eye of designers, but it’s still funny.

Honestly, the best exploits are the most pointless. Sparrow surfing is a great example — it doesn’t unbalance the game or ruin the experience for anyone else. It just makes riding your vehicle a little more fun. In November, gamers discovered that you could disrupt the normal animation for driving the Sparrow by triggering a gesture as you get on. That lets you pilot the glider while standing up, which looks very badass. Unfortunately, it can only be seen by other players if you travel through an area that’s not fully loaded.

Paralyzing Crota with an Ethernet cable

Messing around within the game world is one thing, but screwing with your hardware is next-level exploits. When gamers discovered that they could paralyze Crota — the boss of the game’s second raid — in his only vulnerable state by having the session host disconnect from the internet at just the right moment, they quickly used it as a method to rack up easy wins. The process of doing it was pretty funny: when Crota dropped to one knee, the leader yanked their Ethernet cable (or turned off the internet through their console options), then logged back in and rejoined the fireteam to get the easy kill. Bungie quickly patched this one out (for Bungie Time, at least), but it certainly made for some easy, silly kills early on.

The thing with the Loot Cave is that it was just so easy to do — just set up outside the rock hole and shoot while you watched Netflix. When Bungie patched it away, players had to discover slightly more complex methods of farming. One of the cheekiest was the Infinite Thrall exploit, which popped up in March. Gamers figured out a way to slip through a room’s geometry into an area from earlier in the mission. Once they entered, the room would create a pair of Thralls that could be picked off with ease and respawned over and over, and you could kill them for loot and experience as long as you had ammo.

Bungie’s mission designs for Destiny‘s raids are incredibly clever, filled with interesting adaptations of the game’s mechanics. But as clever as designers can be, gamers are even more so. Crota’s End opens up with all characters under the Burden of Darkness, a mobility debuff that can only be removed by standing underneath lamps scattered around the area. Stand under them too long, though, and they explode, flinging you off into the midst of enemies. That explosion, however, could also be harnessed by standing just so and players could launch themselves to a relatively safe pathway that led to an area near the end of the zone. It was not only a time-saver, but arguably more fun to pull off than the actual mechanic of the zone, which is to run and shoot enemies.

Some cheeses and exploits actually take just as much skill to pull off as actually playing the game. When you’re up against Sekrion, the boss of a strike on Venus, most players know you can remain on high ground to keep away from him. You’ll still have to deal with his plasma fire and a Minotaur that spawns as a futile anti-cheese guard, but it’s easier to just stay up there. Even easier, if you can do it, is to boost jump across a series of ledges in the fight area to stand right over Sekrion’s head, where you can execute it without taking a single point of damage. Pulling it off is tough, but so satisfying when you get it right.

Whenever you push new features public in a game like Destiny, there are bound to be unforeseen consequences. When Bungie introduced the Queen’s Wrath bounties, the rewards they gave were awesome: mysterious chests that you had to hunt down and open within a time limit that began counting down after you wiped out a pack of enemies. However, that time limit came with a glitch that allowed players to open the chests and get the loot, then make the chest lootable again by racing a Sparrow to a neighboring zone, then racing back and opening the chest again. This was not only beneficial, but it was also pretty fun to speed away and back before the timer hit zero.

During the Crota’s End raid at the bridge section, you have to spawn the bridge by standing on a vulnerable platform for some time, then kill an enemy, grab his sword, and hurry across the slowly despawning bridge to kill an enemy that can only be damaged by the sword (which itself is on a despawn timer). If you’re impatient, though, you can grab the swordbearer enemy’s weapon, then jump from a high altitude while repeatedly swinging the sword in the mid-air, and you’ll be carried forward over the bridgeless chasm with each swing due to the weapon’s thrust mechanics. Bungie added an invisible instant death wall midway across the chasm, but you can just swing your way around it if you know where it is.

You can tell that Bungie put a lot of effort into the game’s high-powered boss characters, which is what makes the myriad exploits players have found around them that much funnier. During the early days of Destiny, a couple of the end-game enemies were able to be beaten not by pumping them full of bullets, but by taking advantage of the game’s geography and muscling them off of ledges to their death with the use of grenades. Vault of Glass end boss Atheon was particularly vulnerable to this, as was the Vault’s midway boss, the Templar, which was the only encounter to get a chance at arguably the game’s best primary legendary weapon.

The very nature of Destiny — an ever-evolving MMO — will mean that there will always be new content, and there are more players looking for workarounds and amusing exploits than there are Bungie employees trying to patch them. Players will definitely discover more faster than Bungie can even patch old ones.

[…] by exploiting certain game systems on a grand scale — that the developers take notice, like with Destiny’s now-canonical loot cave. Recently, a hacker was terrorizing ArenaNet’s Guild Wars 2 until the game’s player […]