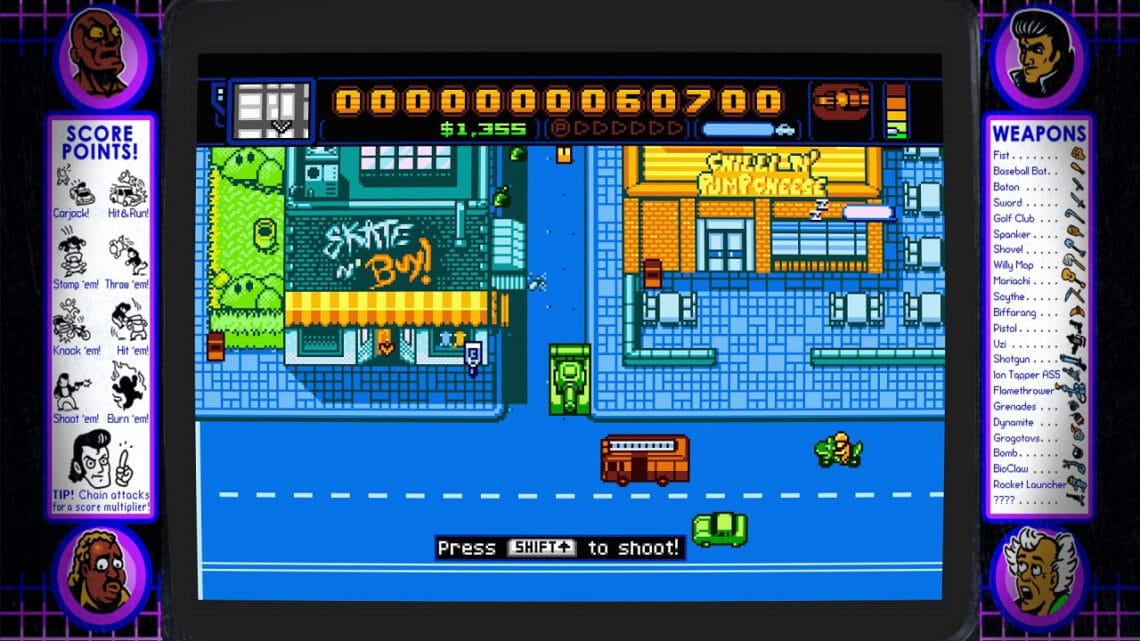 The 8-bit era is long gone, but its playful, blocky aesthetic is here to stay. It’s an attractive art style that culls the best its of nostalgia and familiarity to create slick, intriguing interfaces. And who doesn’t love breezing through a colorful, simplified world that resembles something from their childhood?

Designing from the ground-up to create a game that resembles some of the best pieces of the heyday of gaming is an undertaking in itself, so it’s no surprise so many titles, indie or otherwise, are adopting this approach. The result? Spirited endeavors that aren’t just fun, but kickass. We’ve compiled five of our favorite modern pixelated fantasies for maximum enjoyment. Instead of falling into a turkey-induced coma after you gorge yourself this Thanksgiving, why not load up on these goodies instead?

A disturbing mess of gore, shotgun blasts, and the seedy underbelly of the night as far as assassins go, Hotline Miami may be one of the coolest experiences you’ll ever have in an 8-bit playground.

The top-down shooter relies on shockingly violent action with one-hit, one-kill blasts. It’s the thinker’s massacre. Low-res DeLoreans, menacing animal masks that grant the wearer powers, and chill techno really complete the package. The fact that pixelated red brains and tons of liters of blood stain each crime scene only adds to this truly bizarre and brutal puzzler.

Sure, it could have been created with a more modern look, but it wouldn’t have been the same. Somehow, the realism would have made it easier to desensitize the player. In this case, the low-quality graphics enhance the experience. And we happen to think it’s pretty rad.

2. Scott Pilgrim vs. The World: The Game

Following in the footsteps of the fantastic film adaptation of the comic series, Scott Pilgrim vs. The World: The Game spins a vivid, frenetic tale. It’s bursting at the seams with homages to classic video games and the mechanics they popularized. A chiptune soundtrack by Anamanaguchi completed the package, and Paul Robertson’s signature stamp on the cast of the graphic novels was a welcome aesthetic decision. The love letter to classic side-scrollers rocked special moves, hidden areas, and a frustrating end-boss ripped straight from the pages of Nintendo Hard 101.

Seriously. Almost cost us several Xbox 360 Controllers. When it comes to 8-bit splendor, Scott’s our man.

If you haven’t yet played through Cave Story, go ahead and leave the computer. We’ll wait for you. Just go ahead and pick it up now. You’ll thank us later.

It found its humble beginnings as an indie darling before later phasing to retail releases, but what made it so deliciously charming has never changed. The Metroidvania quality to its level exploration, sprites, and gameplay as a whole combined with its detailed sprites and memorable storytelling creates one of the best side-scrollers released in the past few years.

A true labor of love, anyone who’s a fan of jumpin’ and shootin’ in true Mega Man style needs to get their little hands on Cave Story.

It seems as though there’s a trend with 8-bit styled modern releases to focus solely on simple platforming, but Fez brought with it mind-bending, sometimes obtuse puzzles we couldn’t get enough of. Rotating the 3D landscapes and attempting to work out the secrets of the 32 hidden cubes is satisfying like little else in the realm of platformers, and little Gomez himself is absolutely adorable.

While it’s not a game for those who get frustrated easily, it’s eye candy for anyone who’s ever dreamt of pastel pixels, cheery worlds, and friendly locales in which you can tear your hair out at the difficulty while still feeling as though you’re doing something amazing. That’s not even counting uncovering all the possible secrets.

Even the name of this zany 8-bit trip is a reference to one of the classic games of yesteryear. It’s a madcap representation of Grand Theft Auto III with oodles of references to popular games from the time, familiar one-liners, and other random nods to popular media. In true throwback fashion it’s rocking a killer chiptune soundtrack that gets you pumped and primed to traipse about the city to complete missions and progress forward in the silly yet impossibly addictive PlayStation Network/Vita adventure. Xbox Live Arcade players will have to wait a bit to jump on the bandwagon, but trust us — it’s one worth taking a ride on.

There are five to get you started, but we know there are plenty of others out there that wear the 8-bit badge proudly, strutting their stuff with every new endeavor. Which ones are your favorites? Let us know!