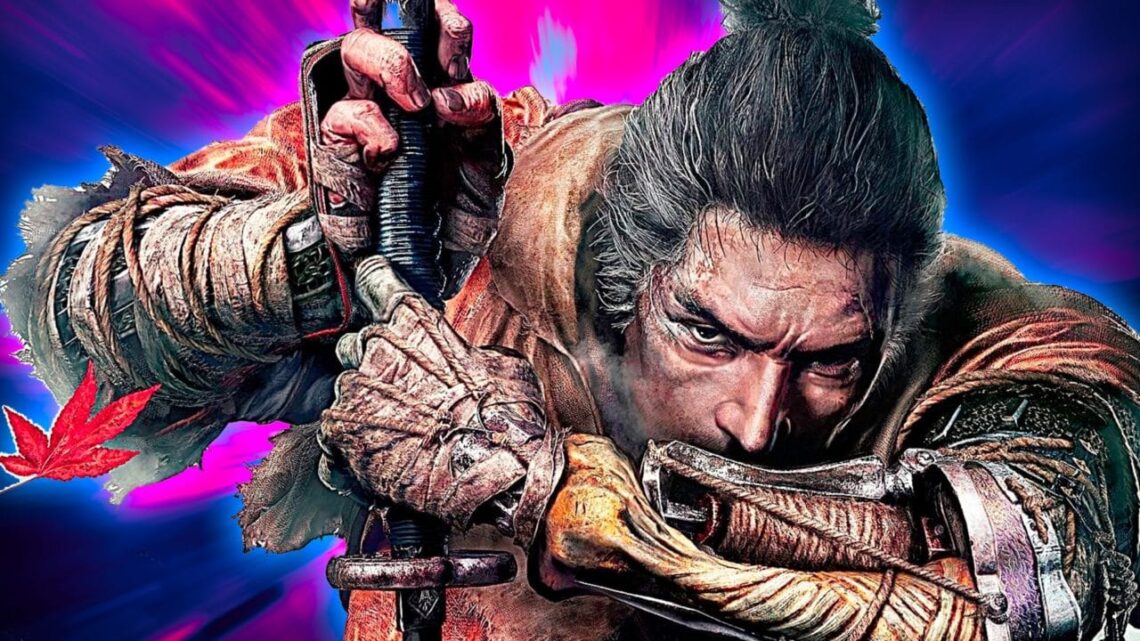 Sekiro: Shadows Die Twice is a hard game but it certainly isn’t Demon’s Souls. Now FromSoftware’s newly released game has become the latest to fall afoul of the gaming press as game journalists reach for the cheat codes and cry out for an easier easy mode.

PC Gamer is just one of many to jump on the “Sekiro is too hard” bandwagon. 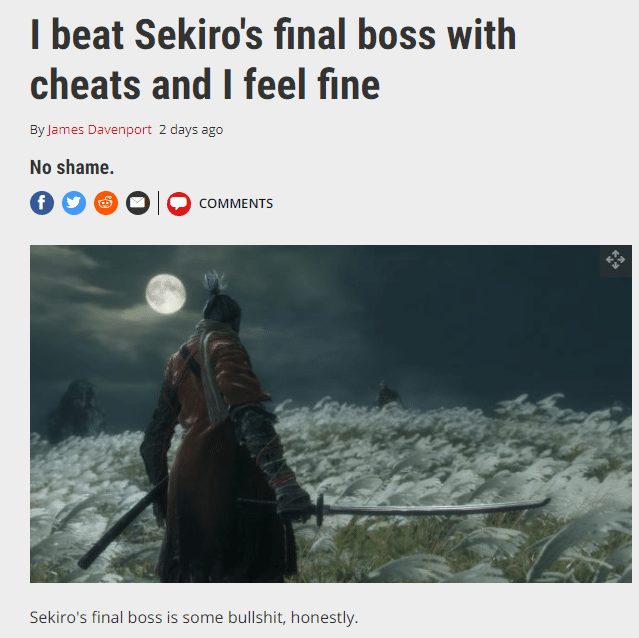 In the piece, game journo James Davenport throws a tantrum about the game and the players who didn’t struggle as much as he did. He describes the game’s final boss as “some bullshit,” writing, “It’s a four phase boss fight and I hate it. I know. It was easy for you. Cool! I spent hours on some of Sekiro’s bosses. I don’t have the time or impetus to prove I can do the sword thing well again.”

“Sure, there’s a return mechanic, but it’s rarely practiced outside of boss battles until the very last stage, and even then, timing your jumps with swift lightning returns against a set of lightning attacks with different release timings — nah, I’m good. This isn’t fun, it’s just four stages of eff-you-prove-yourself difficulty,” he added. “Some might say I missed out on the intended catharsis, sidestepping the ‘artist’s intent.’ So what? There’s nothing to preserve for the greater good in Sekiro’s design.”

Not one to be left out of the whine fest, VentureBeat’s Jeff Grubb condemned Sekiro for its difficulty, demanding that FromSoftware include an “assist mode.” It’s ballsy of him to do so given that the site’s gaming editor Dean Takahashi was thoroughly disgraced for struggling to complete Cuphead’s tutorial mission.

Game journalists are incredibly bad at video games. It’s painful to watch this. How do they think they're qualified to write about games? pic.twitter.com/KbsGIBvQtD

In his piece, Grubb highlighted a number of arguments made by gamers in defense of difficult games, highlighting arguments made by defenders of the game’s difficulty and shooting them down with the claim that gamers are only “pretending to know FromSoftware’s intention.” He also took the opportunity to point out some of the game’s irrelevant flaws, like its 60 frames-per-second lock.

Lets player and youtuber VoidBurger chimed in on Twitter, likening criticism of hissyfit game journos to “stolen valor” and demanding that all games be suitable for everybody. 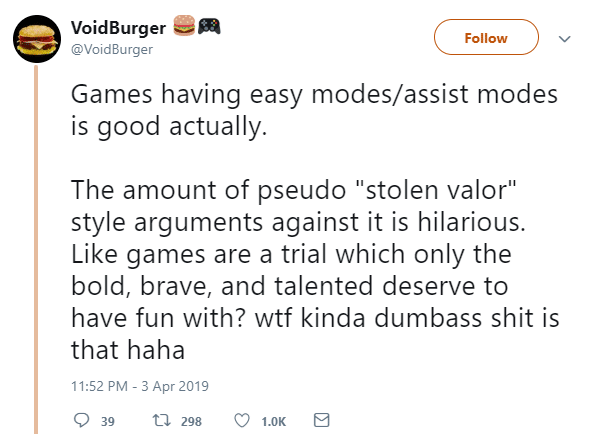 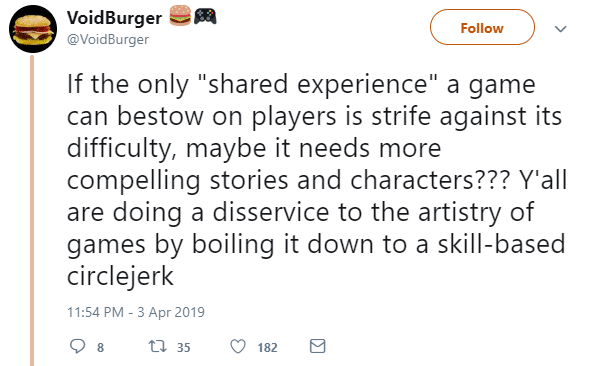 It goes on and on.

Sekiro isn’t a perfect game — no game is — but that doesn’t mean that FromSoftware didn’t correctly execute their vision.

Their games — from Demon’s Souls to Sekiro today — have firmly tied the Japanese developer’s brand to challenging play. Expecting them to implement assist modes for game journalists or to otherwise make their games more “accessible” to a wider audience isn’t something their core audience is going to appreciate.

And in fact, efforts to make otherwise difficult games easy seldom go well. EA toned down Dead Space 3’s content and difficulty to tempt mainstream audiences, and that turned out badly. The same can be said of Fallout 4, which in comparison to New Vegas and Fallout 3 had much of its role-playing elements and dialogue options stripped out to appeal to a more action-oriented crowd.

Sekiro’s difficulty doesn’t appeal to everyone, but it isn’t designed to. You cannot expect XCOM 2 and Darkest Dungeon’s challenge as turn-based strategy games to be toned down just because you’re incapable of thinking three moves ahead of your turn.

While it’s understandable that some people might be frustrated at their inability to be good at a game, these calls to toddlerize skill based games are still essentially calls from a group of players who lack the patience to properly enjoy hard games, and from others who simply want for everything they play to be easy. Story and surroundings mean nothing without a context of how hard a character worked to be there.

Whereas some games reward the player with unskippable cutscenes and CGI, for games like Sekiro, visiting these new areas and fighting new enemies is the reward.

In an industry that should be praising independent thought and creation, more and more studios are being pushed to cater to every need and expectation under the sun — to ignore niches and markets and become bland video game versions of Marvel blockbusters. Unique play styles are being hindered and learning different mechanics is being deemed “unfair” — or worse: discrimination.

Imagine if rhythm games and QTEs (quick time events) were an invention of today’s game journo world. Game journalists introduced to these elements, which prevent them from progressing through the game until they got good, would crucify the developers for their lack of “empathy” for a player’s ability to correctly time an action.

If you think that sounds insane, that’s precisely how crazy anyone complaining about Sekiro sounds to me.

At the end of the day, the question about game difficulty vs. accessibility is simple: “Where does it end?” Between social, monetary, and time constraints, exactly how many different levels of difficulty are needed? Social and practical aids such as colorblind assist and aim assist are already available for players that have pre-existing disabilities and have been adopted as a community standard. Where should it improve or even end?

For those who want a Dark Souls experience without the difficult battles or Mario runners without the coin collecting, it seems the consumer vs industry standard is forever in a state of argument. Accessibility vs artistic expression. Is it fair to hinder the way a studio wants to release a product in the name of fairness?

The most ironic part about all of this is that Sekiro is, by default, set on easy mode. In fact, you can only activate hard mode part way into the game. So, I say, get good. You’re not being forced to play it.

[…] are increasingly out of touch with the game-playing masses, yet there is no end in sight on their wailing about game difficulty or their transparent demand for art to conform to the demands of that very particular brand of […]

we need more games like this to keep normies at bay

to be fair, the Final Boss is indeed alot of Bullshit.
took me a Week to beat that motherfucker…