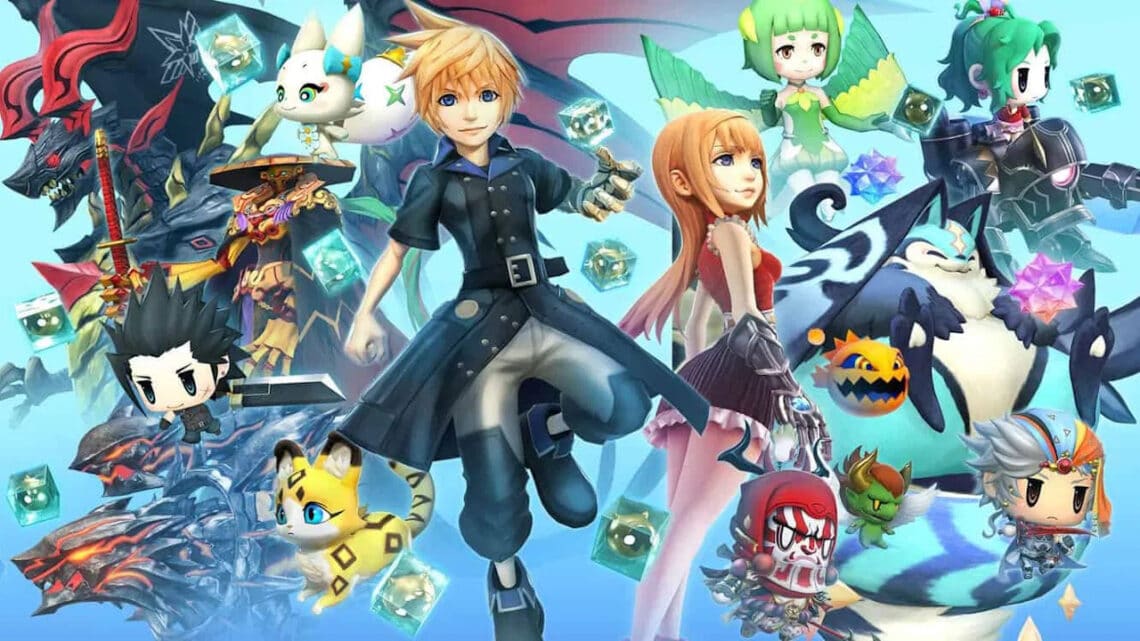 At E3, Square Enix unveiled World of Final Fantasy, a monster-collection RPG based on the Final Fantasy series. As a huge fan of Final Fantasy, this is a game I’ve been dreaming of for a long time, and I’m honestly quite surprised it hasn’t happened before now. With the outrageous popularity of games like Pokémon and Yo-Kai Watch, and Final Fantasy’s impressive roster of recognizable critters, it seemed inevitable.

“It is very challenging in a way to make that transition, and as you can see from the images, the theme of this game is to be fun and enjoyable,” Chiba told me. “But when the producer, [Shinji] Hashimoto, asked me to take on World of Final Fantasy, there was a specific order from him to keep the darkness and heaviness that Final Fantasy is known for, so that is definitely still in there.”

Chiba couldn’t go into much more detail, but he explained that the game follows siblings Rain and Lon as they explore the world of Grimoire, meeting other characters and collecting monsters (called Mirage) to fight alongside them.

Battles are turn-based, using the Active Time Battle system that was common to all the Super Nintendo- and PlayStation-era Final Fantasy games, as well as a few others like Final Fantasy XIII and Final Fantasy X-2. What sets it apart is the tower mechanic, that lets players stack characters and monsters on top of one another, up to three high, to various outcomes.

“The easiest example would be, say you have three monsters that have the Fire ability, stacking them on top of each other would create Firaga,” Chiba explained, but there are bound to more intricate, creative setups than that. “I didn’t just want the famous ones,” he said when asked what monsters made the cut, “but also considered game balance and what would be interesting with the tower mechanic.”

In my mind, this tower system connected back to something Chiba said during Square Enix’s E3 press conference about wanting World of Final Fantasy to be a game parents and children could play together. That comment, coupled with this system, conjured up an image in my mind of a kid sitting on the shoulders of a parent. Was this intentional?

“That is a coincidence, but it’s a very good story!” said Chiba, much to the amusement of everyone in the room.

In fact, the idea for the tower system came from something drawn by Yasuhisa Izumisawa, one of the character designers (who previously did character designs for Final Fantasy Crystal Chronicles). “He was just playing around, and he drew a picture of the characters on top of each other. I saw that, and I thought that’d be very interesting to put into a game,” Chiba told us. 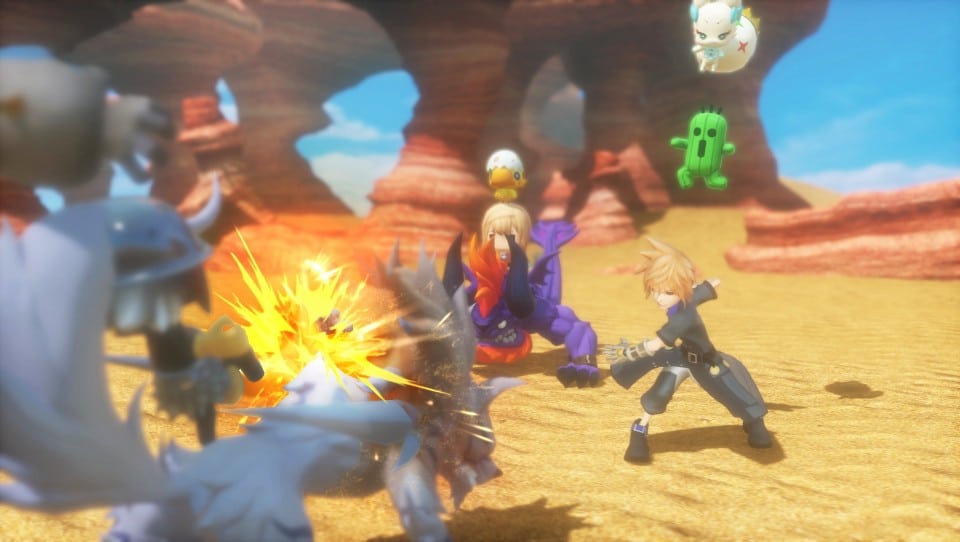 As far as actually recruiting those monsters, there isn’t some universal “catching” system like that of Pokémon; instead, methods vary from creature to creature. “You befriend monsters in battles,” explained Chiba. “It’s a bit different to Shin Megami Tensei [another monster-collecting RPG in which you recruit demons by negotiating with them], but there will be some monsters that you can talk to, and some quests involve trying to help monsters solve their problems.”

While the game will draw on the whole Final Fantasy series, including spin-off games, Chiba’s main focus is on earlier titles, from before Final Fantasy X. “I want that ‘Final Fantasy feel’ in the game, so I’m focusing on the elements from pre-Final Fantasy X games that we’re not really seeing lately, like walking around the world map and riding airships.” Some iconic Final Fantasy Jobs – like the Black Mage seen in the trailer – also make appearances as monsters in the game, though there’s no dedicated Job system like that of Final Fantasy V or Final Fantasy Tactics.

As much as this game oozes fandom, Chiba wants it to be accessible to newcomers, and is making a point of trying not to alienate people who aren’t familiar with the series.

“I obviously kept the Final Fantasy vein and heart in the game, but a lot of the systems and elements are intuitive, so new players will be able to easily start playing,” he explained. “There are characters from previous Final Fantasy titles, but I made sure that they are in there in a way that knew players don’t need to know them at all to be able to empathize with them.” 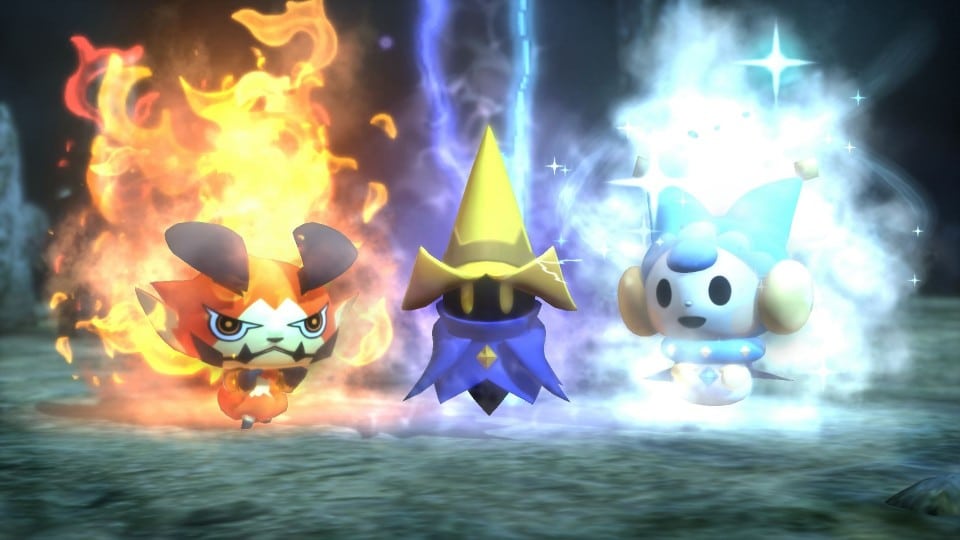 World of Final Fantasy is somewhat unusual in that it’s being developed simultaneously for PlayStation 4 and Vita; Chiba’s reasoning for this is that he wanted the power of the former, but the portability of the latter.

“I wanted the specs of the PS4 because of all the monsters I want to put in the game, and to be able to freely form towers with any of the monsters; PS4 was the hardware to do that,” Chiba said. “But because it does take time to collect the monsters and befriend them, and try to get all of them, I wanted players to have the freedom of being able to take the game with them. There’s also a Cross Save feature between PS4 and PS Vita.”

This makes it sound like the Vita version will be stripped back, but Chiba was quick to put those fears to rest. “I’m trying to make it so that players won’t feel any difference between versions,” he said. “To make sure there’s nothing that’s possible on one platform, but not the other.” 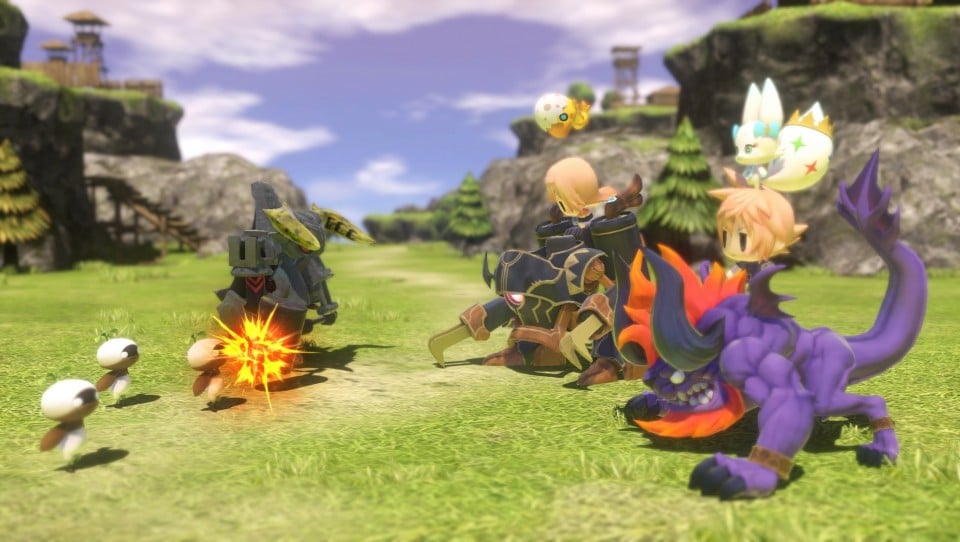 Technical considerations aren’t limited to a numbers game with the monster count, but with the toy-like aesthetic as well. In fact, the challenge it presented was one of the reasons this visual style was chosen.

“We decided to go with the toy-like appearance to take on a new challenge graphically, and also to appeal to younger audiences,” Chiba said. “It’s hard to tell from the trailer, but if you look closely, you can see the use of toy-like materials.” There are no plans to add a physical toy element to the game, like Nintendo’s amiibo or Disney Infinity, but Chiba did acknowledge that this would be “super fun.” 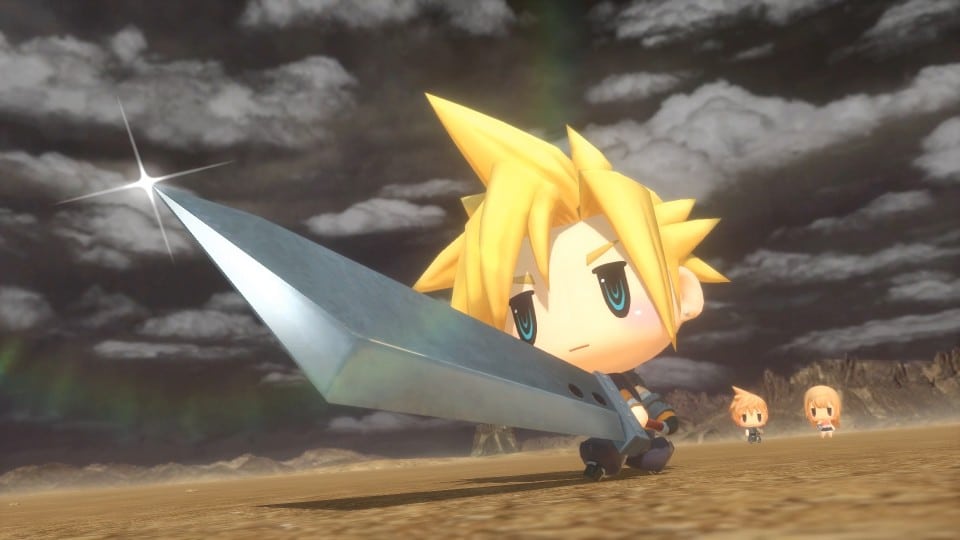 Looking further into the future, Chiba said that he hopes World of Final Fantasy is a jumping-off point for a whole new Final Fantasy sub-series. “There are so many elements and monsters that I’d love to put in there; I’d love to make a whole series to draw on everything.”

Whether it does turn into a series will depend on how well this game does when it launches next year. I’m confident, though. Like I said before, this is a game I’ve long been waiting for, and it sounds like Chiba has certainly got this particular airship headed in the right direction.

This is going to be great for the vita, I think the charter style is winning me over..slowly

Not a fan of the character style… but I am starting to get excited for this game.

Loving this guy’s cheeky face. Will be a lot of funny things in this game. Can’t wait to play on Vita, like some others here.