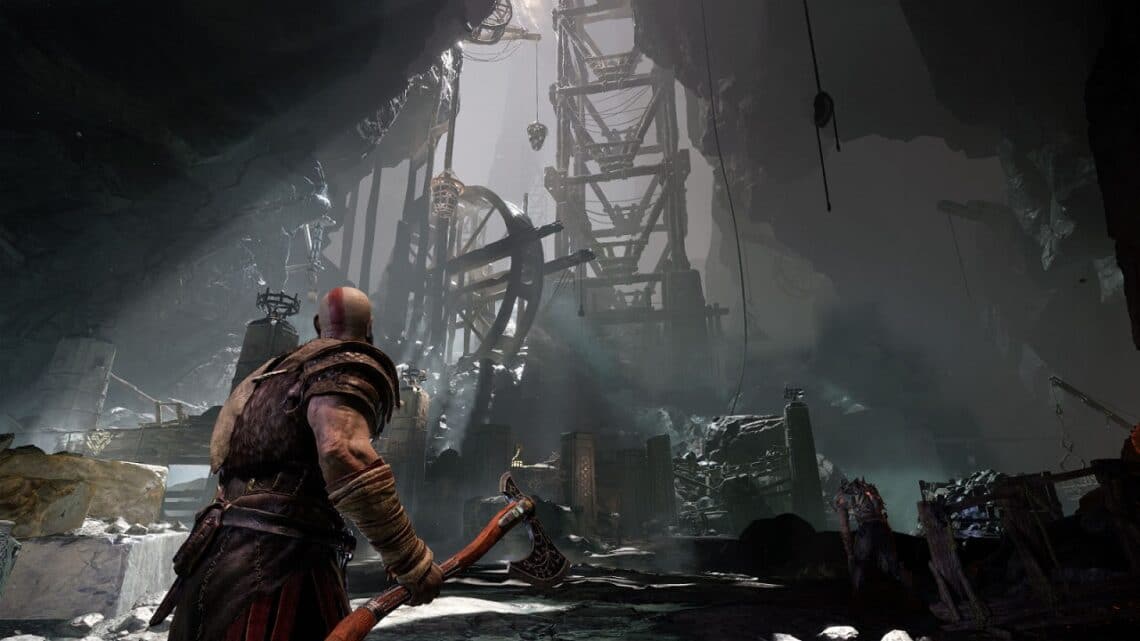 It seems like any discussion of the economics of game-development runs headlong into clichés that all mean pretty much the same thing. This is a ‘hit-driven’ industry, where long-cherished notions of ‘capitalizing on trends’ and ‘building an audience’ dominate the monied end of things; a world where, for good or ill, even a mediocre entry in a mega-franchise will likely bring in ten-times the sales of a breakout indie hit like the recent Celeste. Some trends almost trumpet their arrival from the mountaintops — perhaps you’ve heard of a little concept known as battle royale — while others seep into the popular landscape over years, with the weight of so much rain.

Over time, the AAA action game has slowly moved from the adrenaline-soaked hack-and-slashing of the original God of War and Ninja Gaiden: Black to a more considered blend of ‘action-RPG,’ demanding quick reflexes and strategic character-building in equal measure. One could argue that this late development — epitomized by the new God of War, which features discrete gear-based leveling and Diablo-style loot-grading, twin characteristics of this new breed — represents the increasing sophistication of big-budget gaming, a shift towards engaging minds as well as thumbs.

But in a world where even mass-market mainstays like Assassin’s Creed have damage numbers flowing forth from an enemy’s gut when you stab him with a spring-blade, what does RPG even mean anymore? If once-mindless brawlers like God of War qualify as action-RPGs, what does that make crunchier contenders like Dark Souls, or more niche offerings fashioned from the dusty template of the old-school computer-RPG, like last year’s seminal Divinity: Original Sin 2?

Quality aside, should we still be thinking of the RPG as we always have or has it, almost invisibly, permeated across other genres and evolved in meaning? I reached out to two veteran RPG designers to ask about just that.

Chris Avellone is one of the most respected writer/designers in the western RPG space, best-known for his work on the heterodox Infinity Engine classic Planescape: Torment, as well as Obsidian’s beloved take on the long-running Fallout series, New Vegas. Avellone says that his definition of a role-playing game hasn’t changed at all over his two decades in game development, the integral element being a focus on what industry figures often term “choice and consequence.”

“An RPG allows you to take on a role,” says Avellone. “It allows you to make decisions about your character and your place in the world that are meaningful, and it allows you to grow in some fashion — either XP or otherwise — and present challenges to overcome that allow for that growth: combat, narrative, or otherwise.”

Avellone draws a line between these core tenets of RPG design and other elements that he views as equally important but not essential to it being an RPG. For example, most of the best RPGs out there are loved for their evocative worlds, like Fallout’s vision of an America soaked to the bone with nostalgia and radiation, or the mountains of rusted-out machines that make up Monte Cook’s Numenera, the setting for the spiritual successor to Planescape. More controversially, Avellone says that he regards customization elements like base-management or even building your own character from scratch as a modern addition to the formula that he finds personally appealing, but ultimately not “key to [every] RPG.”

He points to The Witcher 3: Wild Hunt as an example of a great RPG that doesn’t feature character creation — though you can give Geralt of Rivia a nice shave, or let his white hair flow long and free, you’re ultimately stuck in his role as a social outcast that hunts monsters for a meagre living. “What’s important about Witcher 3 is that it allows significant choices,” Avellone says. “And what’s even better about it is that the questions it asks of you are ones where there isn’t a clear answer — so it’s less about what the game can tell you, and more about asking yourself what you would do in that situation, as a player.”

“What I mean is this: suppose you are presented with a decision, but exploring the game world has told you that choice X is Chaotic Evil and choice Y is Lawful Good. That’s less of a role-playing decision to me, versus when it’s not so clear-cut, because you have to do more searching of what values you have as a player, and what risks you might be taking in making a decision — even with how much you trust what you’re being told by the person you’re talking to. The Witcher 3 presented that world. It had a lot of complexity and made you give a lot of thought to your decisions – for that, I thought it was a great RPG.”

Regardless of the particular definition of the form, as any abiding genre fanatic will attest, most RPGs live or die on the strength of their storytelling. It might be surprising but it wasn’t always that way, as veteran RPG developer George Ziets recalls. Ziets started working in the games industry around the turn of the millennium, eventually working on New Vegas and Torment: Tides of Numenera with Avellone, along with a host of other games including Dungeon Siege 3 and Pillars of Eternity.

Ziets recalls that early computer RPGs like Wizardry and the original Bard’s Tale essentially ported the most popular editions of their tabletop progenitors like Dungeons and Dragons to the personal computer, eschewing epic tales of sword and sorcery to focus on the tactical guts of the pen-and-paper experience. “Originally, most RPGs were Tolkienesque, monster-slaying fantasies,” Ziets says. “Now we have RPGs set in science-fiction worlds, modern times, etc. Similarly, most early RPGs had some version of D&D stats and skills, but many are now evolving away from strict adherence to those rules.”

To Ziets, this slow expansion beyond the realm of twenty-sided dice and Vancian magic reflects the advance of video games as a medium, in the same way as early television programs like The Twilight Zone resembled theatrical productions more than the elaborate multi-camera setups of later decades. “As the art form evolved, and creators discovered techniques that were unique to television, that gradually moved further and further away from the techniques of theatre,” says Ziet. “TV got better and came into its own because creators learned what worked best for their medium, but in the early days, they had to start with what they knew. I see RPGs in much the same way.”

As the genre shed its analogue origins and began to explore the immense possibilities of digital space, however, the expectations of the player-base began to change along with it. Avellone remembers the days when players were expected to draw their own maps, engage in tedious pixel-hunts, or — worst of all — call up premium hint lines for help with labyrinthine questlines. For a generation of gamers raised on the likes of THAC0 and needlessly-Byzantine attack tables (staples of early RPGs) the shortcuts of today seem like ostentatiously easy living. There’s a small-but-enthusiastic audience for games ‘hardcore’ enough to abandon these modern trappings, such as Caves of Qud or Brogue. Even something as lauded as Wild Hunt caught more than its share of flack for its less-than-immaculate inventory system and inexact player movement.

“I’ve noticed that Fallout has removed some elements and added others depending on the game,” says Avellone. “I suspect that’s done to make progression easier — easier for a more casual user to understand… Players expect quest-markers, an auto-map, easy equipment comparisons. Overall, things have changed over the decades to reduce a lot of the heavy lifting RPGs used to do. I’m not saying that’s bad, but its influences aren’t driven by the RPG market, but player expectations.”

When faced with the onslaught of skill-trees and colored loot flooding the very top of the sales charts, neither Avellone nor Ziets expresses any serious concern about these mega-action games pushing less mainstream fare out of the market. In Ziets’ view the opposite is happening, thanks to the small horde of high-quality ‘traditional’ RPGs released in the past two years which grappled for the limited time and hard drives of genre fans: Pillars of Eternity 2, Torment, Wasteland, Divinity: Original Sin 2, the Banner Saga series, and stylish newcomers like Disco Elysium (formerly No Truce With the Furies).

“If anything,” says Ziets, “I’m worried that the abundance of RPGs is going to make it harder for any individual game to stand out or cause burnout in the core audience.”

Avellone says that he appreciates the wealth of choices modern games allow him to make about gear, fighting style, and general combat capabilities. But to return to his favorite example of The Witcher 3, the game’s wealth of branching questlines is what makes it “a great RPG. In games, the willingness to integrate choice comes down to the budget of the game and the expenses involved with the choice… The more expensive the game, the more resistance there can be in the development process to showing choice in player agency, because branching assets can be very, very expensive.”

“For example, look at Selling Sunlight, a game with a unique and wildly creative premise, and a core game mechanic that’s based in trade rather than combat,” says Avellone. “Some innovation is on the system-side, like the fresh take on skill and ‘narrative combat’ in Disco Elysium. These games are trying things that bigger studios with bigger budgets would never attempt because they’re too risky… the danger in not innovating is real, though. To stand out in today’s RPG market, you need at least one strong hook to distinguish yourself from other games. Without that, even if your game is good overall, you may not attract enough player attention. Having too many hooks is also bad, as it can dilute their benefit — one or two seems about right, allowing players to recognize and remember your game.”

Ziets agrees with this perspective on the limits that big budget titles, perhaps unexpectedly, force onto their developers. Players can expect unparalleled bombast and spectacle from smash-hits like God of War but, in all but a very few cases, need to look ‘downmarket’ for games that truly embody the RPG ideals of player agency. Branching paths and meaningful choice might crank up the cost and man-hours that developers have to sink into their games, but for developers like Avellone and Ziets the concept is not a bullet point or a sales pitch — it’s the whirring gears that make an RPG truly work.