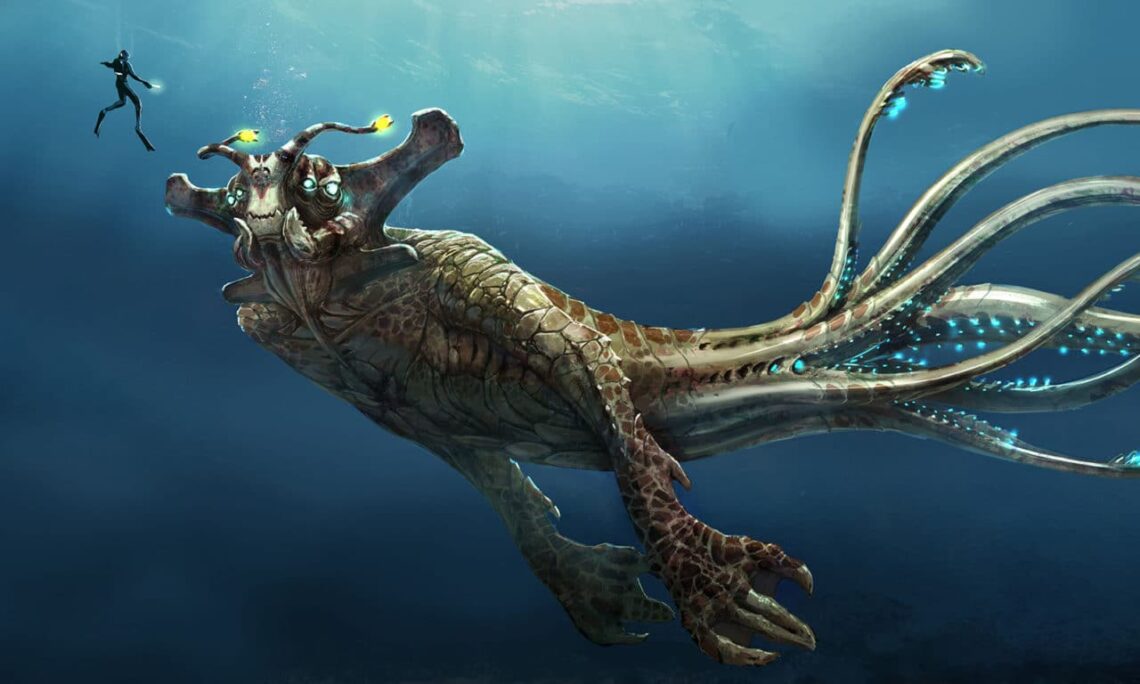 Chylinski was subsequently fired by his employers at Unknown Worlds following a sustained campaign over the weekend by social justice activists on both Twitter and the ResetERA gaming forums, who called on the developer and publisher to act against him.

Subnautica is an underwater survival game filled with eerie noises and a haunting soundtrack, for which Chylinski is responsible. Over the weekend, the outrage crowd discovered an old set of tweets by game director Charlie Cleveland, who set up a poll in 2016 asking players if they’d prefer it if Subnautica added the option of a female player character or improve the core game.

Implementing a female character into the game would require an immense amount of work, including model rigging, animations, outfits, voice acting, and changes to both the storyline and core gameplay. Naturally, most of Subnautica’s player-base voted to improve the core gameplay. 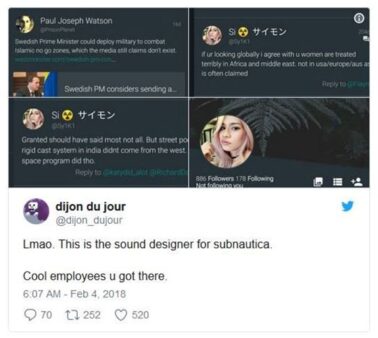 Following a barrage of complaints, Cleveland deleted the post, prompting Chylinski to joke that the developers needed to add “diversity” sliders in the options that make the character progressively darker-skinned, more feminine, or less attractive.

The resurfacing of Cleveland’s poll prompted the same outrage mongers to pursue Chylinski’s other tweets, discovering that he had retweeted a Paul Joseph Watson tweet about the Swedish Prime Minister’s plan to deploy the military in its Islamic “no-go” zones, which the Swedish mainstream media attempts to downplay.

Chylinski, who is from Poland, sent Sweden his condolences, writing, “People aren’t blank slates that can be reprogrammed simply by being in a new country. Importing random people from the 3rd world is also importing 3rd world-tier crime rates and IQ.”

“Helicopter. The attack kind,” joked Chylinski, playing on the common joke about identifying as an attack helicopter, which is often written in response to Tumblr’s claims that there are more than two genders. The tweet, along with his retweet of Paul Joseph Watson, were seen as “transphobic” and “racist” and ultimately became the main subjects of complaints to his employer.

The two people who sparked the hate mob, @queer_queenie and @dijon_dujour, were successful. Chylinski, who was working full time on an expansion pack for Subnautica when the complaints surfaced over the weekend, confirmed with DANGEROUS that he was fired today.

Speaking to DANGEROUS, Chylinski says that his employer terminated his position because of the Twitter hate mob, and not for any other reason. He says that following the uproar on ResetERA and Twitter, two of his superiors pulled him aside and asked if he stood for what he wrote on Twitter. 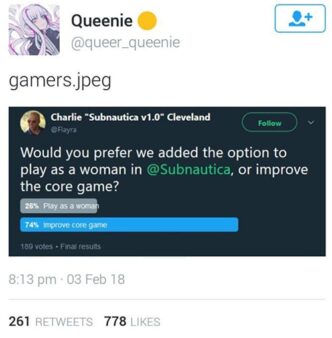 “I said that I honestly didn’t see anything wrong with it,” he said. “I don’t feel like I need to pretend [not to know about statistics and political realities].”

Chylinski says that the issue his superiors took issue with the most was, strangely enough, his tweet about identifying as an attack helicopter.

“They began asking me how I would react if they hired a Muslim or trans person. I said I’d debate them like anyone else on the team if I disagreed with them,” said Chylinski. “They said that this would create an unwelcoming working environment and that they see it as a problem that almost only white men are working there, and they need more diversity and that what I said would make that difficult to achieve.”

The sound designer was quick to defend his former employers to DANGEROUS. “These guys are not bad people. I don’t want to paint them that way,” he said. “They are very talented and on a personal level they are nice to be around.”

On Kotaku, game director Charlie Cleveland wrote: “Over the weekend we discovered that one of our team members had made many hateful statements online that are against our company values. After discussing the matter with him, we decided to stop working with him immediately.”

Chylinski says that he believes they simply didn’t know how to react to the Twitter mob, so they fired him—but he understands their decision.

“I think I should have the freedom to express myself without being fired,” he said, adding that he thought that the company would only distance itself from his opinions and reprimand him privately instead of making a public spectacle of his termination.