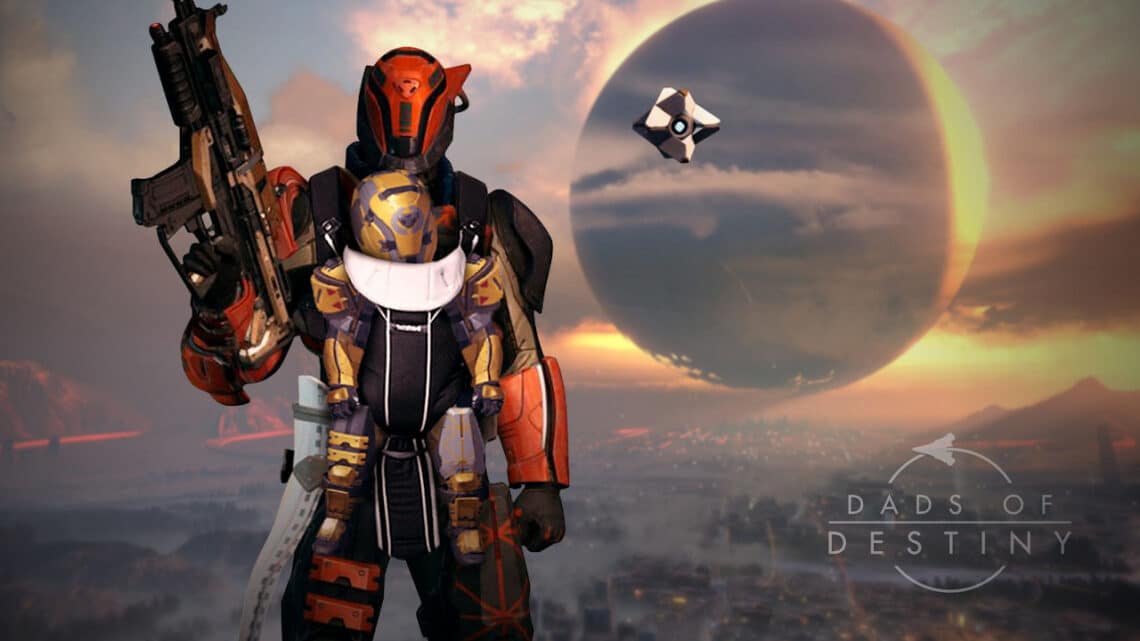 Think of the average bunch of guys in an online clan swapping stories and the word ‘heart-warming’ doesn’t usually spring to mind. But then most clans aren’t the Dads Of Destiny, a 30,000 strong group bound by two common themes: parenthood, and not being a dick..

The clue’s in the title, but while the name suggests children as a binding factor it’s not an entirely exclusive membership rule. True, the majority who join are parents, but the real bonding factor here is that these people are grown-up. And I don’t just mean ‘older’ – I mean it in the sense of being human beings in touch with their feelings and other people’s, in way that you just don’t expect when you think of the traditional ‘male gamer’ stereotype. I’ve been speaking to the Dads of Destiny’s founders and members and discovered a community that’s genuinely touching, brought together by games, life, and online lobby conversations that end in “Oh, hang on a second, I just got pooped on.”

One of the members I spoke to, Joshua McClain, had a story that really helps drive home how what started out as a gaming clan has become way more than that:

Dads of Destiny hasn’t been just a gaming community to play games with. For the past few months my family has been going through a very hard time. I lost my job back in November 2014 when my wife was 8 months pregnant. We quickly exhausted our financial savings, and were forced to relocate in January to another state to live with family. One nite while lying with my newborn son on the couch I broke down. Feeling like a horrible person, husband, and father I reached out to a few of my good friends in Dads of Destiny Eclipse. I started a GoFundMe account, and my “gaming friends” (who I feel are like my family) helped raise over $1,000 to help get my son diapers, formula, and other basic things.

Besides the blessing of funds they also sent “Care Packages” containing more diapers, baby wipes, and formula. To say I’m grateful would be a understatement. This community took care of my family, and kept our morale up. To say I reached a dark place is not easy to admit. Feeling like a failure is not something easy to get over. Dads of Destiny knew this as well. Many members or, better yet, friends reached out to me. They gave me their own personal experiences, and gave me the willpower to pick myself up, dust myself off, and get a job.

For Joshua and his wife Tabatha, the Dads of Destiny community saved his family. The small gesture from members not only helped feed and clothe his son, Michael, but meant the family could put their possessions in storage and keep the car while effectively unemployed and homeless. It was enough to keep them afloat during a rough time and now, happily, both  Joshua and Tabatha have found work. “I wanted to share my story with you all. Whether or not it makes it into the mainstream news or not. I feel like this community deserves to be recognised, not only for gaming together, but for the friends and family you gain while being apart of [it], and the amazing good they do for their family,” he explained.

So how did a small Destiny clan become a global community for fathers around the world and capable of changing lives? Over on its Bungie clan page it currently boasts 31, 363 members (last time I checked), but it all began with one: founder  Jason Edwards, otherwise known as kingpin2.

When the game originally came out, Jason’s daughter was just coming up to a year and half. At the time he described himself as “a new father who used to have a lot of time to game. Times had changed and obviously gaming took a back seat to far more important issues.” That led to a simple thread over at the Bungie forums: “I wanted to know how, as gaming fathers, you would find the time to play Destiny whilst juggling nappy changes and feeds.”

Retweet if you weren't the only one who had a hard time sleeping last night. #Destiny pic.twitter.com/OATX1b81Ng

The idea clearly resonated with people. “The response generated quite a lot of interest,” says Jason, and as more people got involved the group began to take shape. “It was amazing to see my little thread morph into a little group of dads. I never envisaged it to become as close knit and as complex as it is today, it’s incredible.” Beautifully, the organisers call themselves ‘Dadmins’ and included people like Matt, better know by his Gamertag SSM (short for StopShootingMe), DeepFriedDave and Chris “Buruko” Templeman. As time’s moved on it’s expanded to include other games, but the initial premise remains: being a parent and playing games aren’t mutually exclusive.

“Its initial premise was to simply be a place for dads to come and find other dads to play games with and to share a bit of parenting advice to dads who needed it,” explains Jason.  “I think it’s about how as gamers, when life changed and we became parents, we didn’t find a similar player base accepting that we might need to tend to important duties during our free time to play. This group I think has taken off the way it has simply due to the offering of a relaxed atmosphere of people who understand that if you need to go tend to your son/daughter etc, then you don’t have to worry about people passing judgement on you.”

Destiny also seems to inadvertently have a structure that suits the demands of parenthood as well, according to DeepFriedDave. “It often feels like Destiny was made for the DoD.  Dads have limited and sporadic time to play [and] it’s often interrupted. Most [Destiny] events are 30 minutes or less, so it all fits perfectly with a dad’s busy schedule.”

“You can come here to ask the dad questions your friends who are not dads won’t understand,” DeepFiredDave continues. “You can drop out of a raid to clean up a toddler’s puke without getting berated. You can celebrate your family, kids, and love for gaming with other mature, like-minded fathers. I think the DoD benefits the community so well because there was a need for this dad mancave, and we’ve built it around the community and what they want.” It’s this, he explains, that’s created a “a group of people who are mature fathers that have limited time to game, and go through the same juggling act with family, work, and gaming.”

When I reached out to members to ask what the group meant to them, the message was almost unanimous: being a parent is really hard but sharing the problem makes life easier. “DoD members openly offer support for struggling fathers and soon-to-be dads waiting anxiously through that first birth [and] advice for first time fathers on how to deal with different aspects of having children,” explains member MadMatt247.  “Being a dad, much like being a gamer, is like being part of some club,” says CobaltCam. “We get jokes other people don’t, we relate to topics other people don’t. This community has taken the best of both of those things and combined them in one place.” And, as SublimeAnarky puts it: “To have a group that can roll with you and understand when you need to go afk to deal with an upset infant is a big deal. Try that with any bunch elsewhere and profanity will follow (and a boot to orbit).”

Here’s another great testament that sums up the group:

“As a dad I always get the virtual stink-eye from the younger guys when I have to bail for a minute for one of my kids. Since joining the Dads I don’t think that I’ve had a single gaming session where one of us is not saying, ‘Oh, hang on a second, I just got pooped on.’ or ‘Be right back guys, my son just fell on his head, gotta make sure he didn’t dent it.’ It is never a bad thing for us to need to be dads, it is encouraged. Family first, gaming second. We come together when things get hard, when someone is floundering. And not just in the game world. The Dads are one of the only clans I’ve ever seen to monetarily support/donate to each other when we are in a time of need. Whether that be in the form of money, advice, encouragement, a new Xbox, and anything else that can be packed up and shipped over to the one struggling. I love it. It is an honour to be part of a group of guys that value family over all else, and to know that the word ‘Family’ extends to the DoD Community.”

Being part of that family doesn’t mean you have to have one either (or at least a recent one). “When my fellow Dads find out I’m 51 they get a real kick out of my enthusiasm,” says Rich, or ‘xrsxjrx’ as he known on the boards. While Baba-Looey trumps him with, “60 years old, gaming for 40 years and still have the enthusiasm of a kid. Not very good, but still have fun.” There aren’t many clans with such an accepting age policy, and it doesn’t stop there. “Apart from the usual father stuff, this group has been fantastic for my mental health,” explains JaundicedOutlook . “I can have problems with people: I have bipolar disorder and I’m also on the autistic spectrum. This group (& game) has helped me a lot. I’m definitely getting the hang of this social stuff. It has given me a new confidence in the game world & real world.”

JaundicedOutlook, like nearly everyone I spoke to, finished by thanking the Dads of Destiny. There’s an almost unanimous outpouring of gratitude from its members, who gain a huge amount of comfort, support and strength from their two combined passions of gaming and family. ‘Being a man’ often seems to be built on a weird combination of stoic isolation and braying bravado but that’s something The Dads of Destiny has thrown to one side with a community brought together by shared bonds. “The name Dads of Destiny may have started out being aimed at the game but I’ve found, as time has gone on, it isn’t that at all,” say Jason. “Dads of Destiny to me now holds a different meaning. To me it means as dads we were destined to find each other, to be a part of this collective of mature players to play games together.”