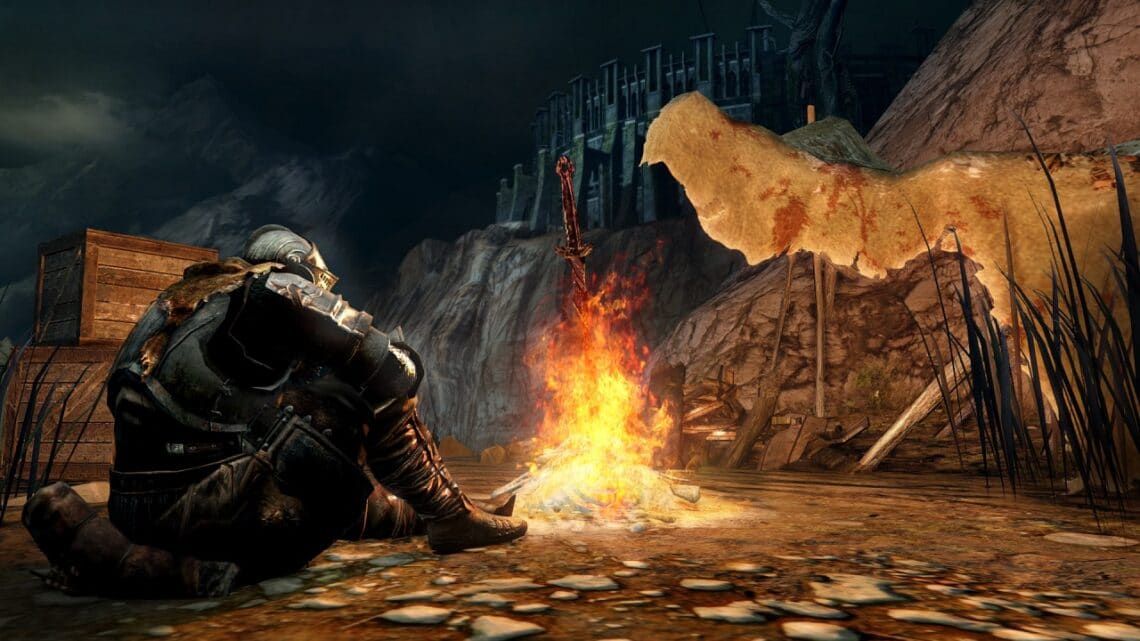 Video games usually have an easy answer to the question “What does it mean to be a hero?” It’s an opportunity for excitement and adventure, to enter a virtual world and leave your mark by smashing enemies and saving the day. Most of the heroes we inhabit are modelled after the ancient archetype: a body characterized by strength, made for carrying all manner of war-tools. But even though it is idealized and set apart as something rare, this body is a dime-a-dozen. It’s a sleek but cheap vehicle designed to whisk us away for a few diverting hours. We never wonder what happens once its glory days are over, and decay sets in. After all, it was disposable from the beginning.

Dark Souls is about a different concept of heroism. One that derives part of its potency from the certainty that, one day, even the strongest and most illustrious will fall — and that this fall is both a great tragedy and a source of inspiring, sublime beauty. Playing Dark Souls means guiding a struggling body through a dying and decaying world, the remnants of its former beauty pervading everything with a sense of loss and melancholy.

This is not some postmodern deconstruction of heroism. There’s no question that Lordran was once glorious, or that the Chosen Undead’s struggles are legendary feats. The dark heroism of Dark Souls is far more classical, old-fashioned even, than the swashbuckling adventure games we’re used to. It particularly resonates with a work of literature that’s anywhere between 1000 to 1300 years old, with roots that reach even further back in time: the Anglo-Saxon epic Beowulf.

The poem’s story is easy to summarize so, if there are any Anglo-Saxons who haven’t got around to it yet, spoiler alert! A young hero named Beowulf sails from the land of the Geats to assist the Danish king Hrothgar, whose mead hall is being terrorized by the demon Grendel. When Grendel attacks again, Beowulf rips his arm off with bare hands and the monster flees back into the moors. Soon, however, Grendel’s mother seeks revenge, catching the celebrating warriors off-guard and killing many. Beowulf follows her into the swamps and dives into a deep lake. There he discovers an underwater entrance to the monsters’ lair and beheads Grendel’s mother after a vicious struggle. After much reveling and gift-giving, Beowulf parts from Hrothgar and returns home.

The poem then cuts, and shifts in time. Decades later, someone steals from an ancient treasure hoard and disturbs a sleeping dragon. The aged Beowulf, who has now ruled as king of the Geats for many years, faces the dragon to protect his people, even though he knows that he won’t survive the encounter. All but one of his warriors flee at the sight of the monster. Beowulf slays the dragon in a titanic battle, but is lethally wounded. His body is burned on a pyre, and the vast treasure he won in life does little to console his grief-stricken people. The poem fades to black as they gather around the dead hero’s barrow, facing a bleak und uncertain future.

Wise sir, do not grieve. It is always better
to avenge dear ones than to indulge in mourning.
For every one of us, living in this world
means waiting for our end. Let whoever can
win glory before death.
(from Seamus Heaney’s translation of Beowulf)

It’s a morbid story about mankind’s struggle against the monstrous forces of a wild and inhospitable world; a struggle that’s heroic because it is doomed to end in tragedy. Interspersed throughout the ‘main’ story are songs about massacres and bloody feuds, sombre scenes of mourning and burial rites, and premonitions of dark things to come. Ever since J. R. R. Tolkien’s 1936 lecture ‘Beowulf: The Monsters and the Critics’, the poem has often been called a “heroic elegy” — a farewell to the glories of heroism. And it’s not just Beowulf or other individual heroes who are mourned in the poem, but the death of a whole world order: after Beowulf’s death, his people are haunted by visions of invading forces destroying their way of life.

We can go even further. Beowulf is a story set in 6th century pagan Scandinavia, composed and written down in England by a Christian poet a few hundred years later. In this context, Beowulf is a troubled look back at a Germanic, pre-Christian heritage of boastful heroics (and shameless, mead-soaked partying) that had come to an end with the advent of Christianity.

Dark Souls and Beowulf may seem like strange bedfellows. After all, Dark Souls is in many ways much more obviously indebted to a later medieval tradition, something more sophisticated and less raw than tales of pagan bloodshed: the era of Chivalric Romance, its questing knights and courtly values. The aesthetics are strongly influenced by the art of the 19th century Romantics, for whom the trappings of the Chivalric and Arthurian Romance were fashionable. At first glance, a game like The Banner Saga with its ship burials and norsemen may seem to have more in common with Beowulf than Dark Souls. But beneath Lordran’s chivalric castles and lofty cathedrals, there beats a bitter, pagan heart. 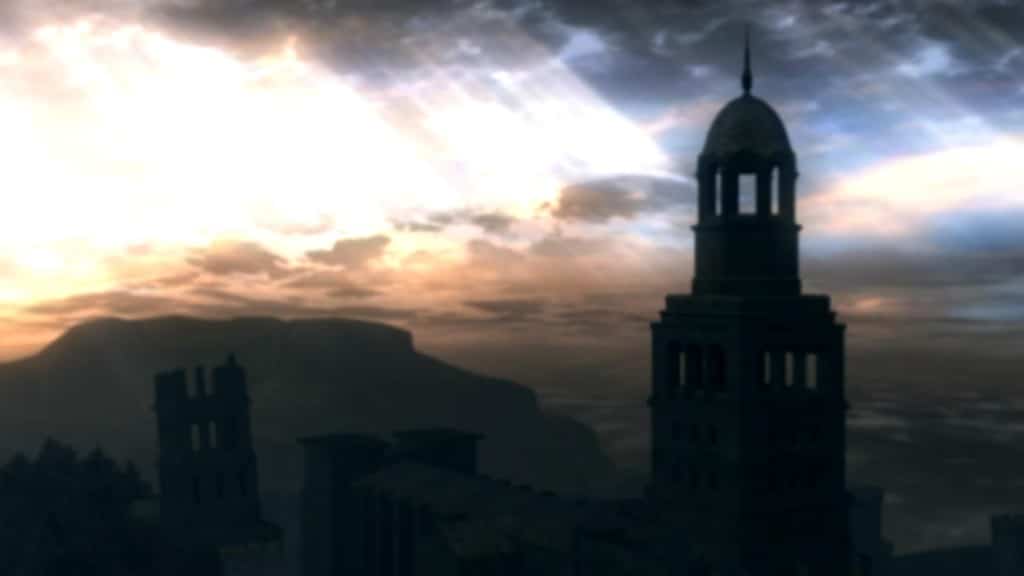 No trembling harp,
no tuned timber, no tumbling hawk
swerving through the hall, no swift horse
pawing the courtyard. Pillage and slaughter
have emptied the earth of entire peoples.

In a way Dark Souls starts where Beowulf ends. When the Chosen Undead arrives in Lordran, the golden age of riches and great deeds is long-gone. We find the souls of legendary knights on desiccated, anonymous corpses, and come across the crumbling statues and graves of legends. Some of them, like Knight Artorias or the former Lord of Sunlight Gwyn, we even encounter — but they have become lingering and deadly shadows haunting Lordran alongside the monstrosities they were supposed to have conquered.

The champions of the old world failed to protect their people, and have become half-living symbols of that failure. Their true tragedy is that they cannot escape the dying past: Gwyn’s desperate quest to delay the inevitable doomed his world to an eternal twilight existence. Beowulf’s Norse dragon and the heat death of the Souls cosmos may not seem like the same thing, but they share a message: the forces of entropy eventually overwhelm the gods themselves.

The players are the enforcers of this grim fate, working their way through Lordran, putting one undead remnant of the old world after the other to the sword. But they are also doomed heroes. Like Beowulf in Hrothgar’s cheerless mead hall, the Chosen Undead arrives in a foreign realm only to find hollowed-out castles and echoes of former glory. Like Beowulf, sinking to the bottom of the swamp, the Chosen Undead descends into the corrupted depths of the abyss. And like Beowulf, preparing to meet the dragon, the Chosen Undead steps through the fog gate to encounters they know they won’t survive.

“You are the last of us, the only one left
of the Waegmundings. Fate swept us away,
sent my whole brave high-born clan
to their final doom. Now I must follow them.”
That was the warrior’s last word.

There is a difference. No matter how many times one reads the poem, Beowulf will never survive his battle with the dragon. But the Chosen Undead can try again and again. It can be a daunting and somewhat less-than-heroic process, but it’s also strangely encouraging: the dragons and monsters can, eventually, be conquered through some alchemy of skill and stubborn resolve.

There’s a jarring duality there, between hope and hopelessness, reminiscent of Beowulf’s explosive mixture of pagan fatalism and the optimism of young Christianity. The unusual element in Dark Souls is how it frames this heroic struggle, which is a cyclical worldview more at home in Eastern than Western philosophies: an ending is just the beginning of a new cycle.

The tragedy of Lordran is that its cycles are stuck, repeating without renewing themselves, unless a competent hero comes along to give them a nudge. It is stagnant, no momentum. A sprawling open-world whose paths don’t point outward, but obsessively inward, leading back to where they came from. It’s an introverted, navel-gazing architecture pondering its own twisted and broken being.

Travelling through Lordran isn’t a line from A to B, but a slow movement in circles. Despite the deadly traps and enemies it feels like a contemplative space, a giant labyrinthine graveyard or tomb where you’re encouraged to linger and acknowledge the tragic fate of its inhabitants. There’s a sombre silence over everything, as respectful as it is disconcerting. The absence of music and the noise of the living is tied to death and despair in Beowulf, and so too in Dark Souls. Lordran is its own elegy. 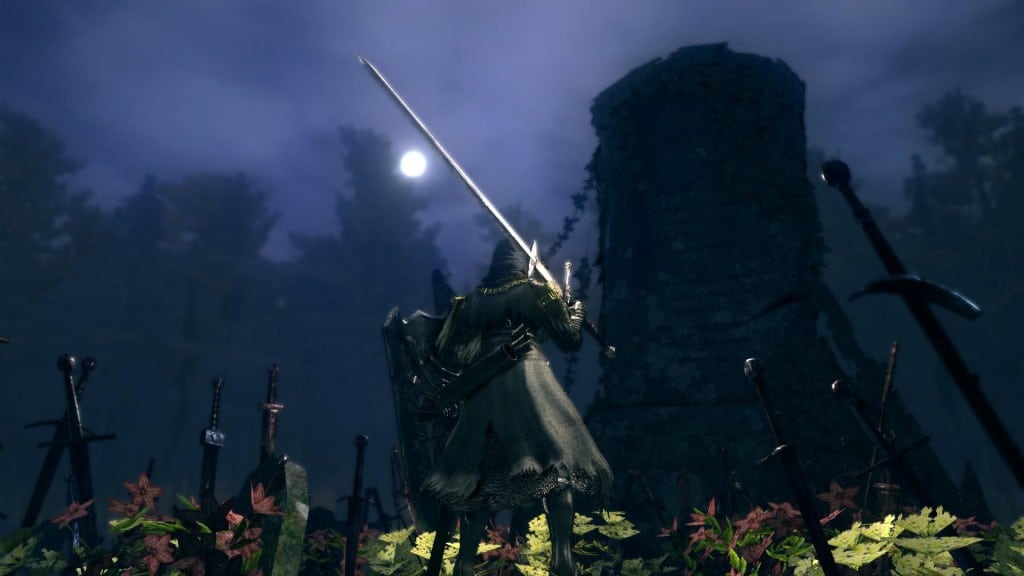 On a height they kindled the hugest of all
funeral fires; fumes of woodsmoke
billowed darkly up, the blaze roared
and drowned out their weeping, wind died down
and flames wrought havoc in the hot bone-house.

Before Tolkien’s ‘Beowulf: The Monsters and the Critics’ the poem had often been criticized for its weak narrative structure — one moment, Beowulf is a young hero wrestling swamp people, the next he’s an old man facing an overgrown reptile. There’s no connection between the two, the critics complained, no narrative momentum pulling you from one silly creature feature to the next. But Tolkien argued that Beowulf was not a straightforward story, no epic poem at all, but used its static nature to create an elegiac effect. It shows both sides of a scale in balance: the hero’s rise and fall.

Beowulf is a ‘bad’ story in the same way Dark Souls, with its meandering paths, is a ‘bad’ game. In some ways Dark Souls 2 and 3 are more compelling experiences than the original, moving at a brisker, more exciting pace. But in the process of becoming ‘better’ in some ways they have lost much of what made Dark Souls unique.

Perhaps that is the final thing these great works share. Beowulf survives in just a single manuscript, and there are no comparable works — in 1731, a fire almost claimed it forever. Dark Souls too stands alone. Its many imitators and even its own sequels try to replicate its difficulty and compelling gameplay loops, but cannot copy its raw, haunting melancholy.

There’s something diffuse and fading about Beowulf’s world, almost like it’s scattering as you read the words, and Lordran has the same atmosphere. Beowulf is a look back at pagan Scandinavia through the eyes of Anglo-Saxon Christianity, while Dark Souls is a creative reinterpretation of a mythic, medieval Europe by a modern Japanese studio. They’re both dislocated in time and space, neither here nor there. A fitting place, then, for dying worlds and heroes.