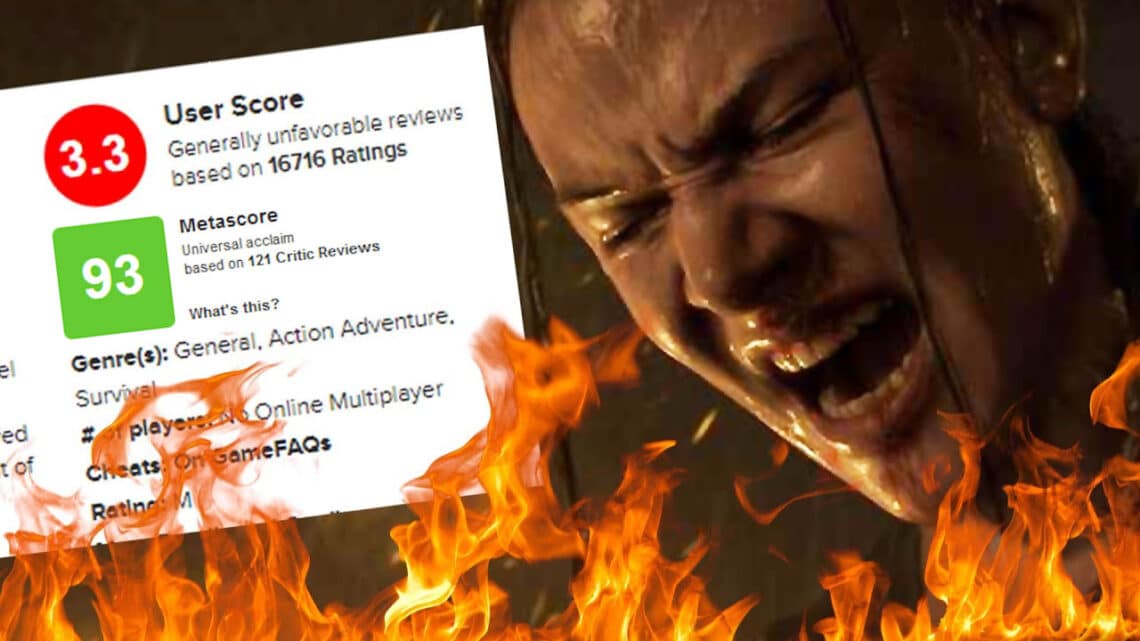 Believe it or not, I haven’t always been a games critic. Once upon a time I enjoyed games with nary a thought of cataloguing performance and assessing if they furthered the state of the art. There’s a difference in how you look at games once it’s your job, a shift in focus. A critic might value different things in a game than the wider audience does, and vice-versa.

With the help of complex statistical analysis, we decided to shine some light on that divide. Here we’re going to look at the games that users rate more highly than critics, and see if we can tease out any interesting trends.

The main lesson is that gamers seem to be far more forgiving of licensed tie-in platformers than critics are. Read on to find out more!

As with our previous pieces on the best first party games and the Switch vs WiiU comparison, we took the data in this piece from Metacritic: We downloaded data on over 18,000 games and over 200,000 games reviews (across all systems) to draw these conclusions. Obviously this means there’s a number of important things to bear in mind – and so with which to calibrate the number of grains of salt you take this analysis with. For example, our data is only as complete as Metacritic’s was when we took our snapshot of their data the end of last year. This means that if a game isn’t correctly listed as not being multiplatform, it would impact the data here. Though this said, we’re fairly confident that Metacritic’s data is robust – especially for Xbox One, PS4 and Switch, given they are the newest and most closely watched consoles.

When it comes to scoring and working out averages, Metacritic normalizes scores from different publications on to a scale of 1-100 (so that 5/10 becomes 50, and 3/5 becomes 60, and so on). We took all of the scores and worked out a mean score for each game (distinct from Metacritic’s weighted Metascore), which is what is being used in the comparison below.

This analysis will be broken down into several categories. Bearing in mind that the further back we go the less reliably comprehensive Metacritic’s data becomes, we’re going to look initially at lifetime data, but only zoom in on the PS4, Xbox One and Switch for closer analysis.

We limited our dataset to games with 30 or more critic reviews on Metacritic, as well as games that had hit Metacritic’s mysterious “enough user reviews to show an aggregate user score” threshold – we don’t know what number triggers this. It’s minor but important to note as it may mean some games which have been re-released fail to make lists due to lack of users returning to re-review the title. Also, it should be noted that in order to directly compare user scores and critic scores on Metacritic, we multiplied user scores by ten in order to get them both on the same 1-100 scale. 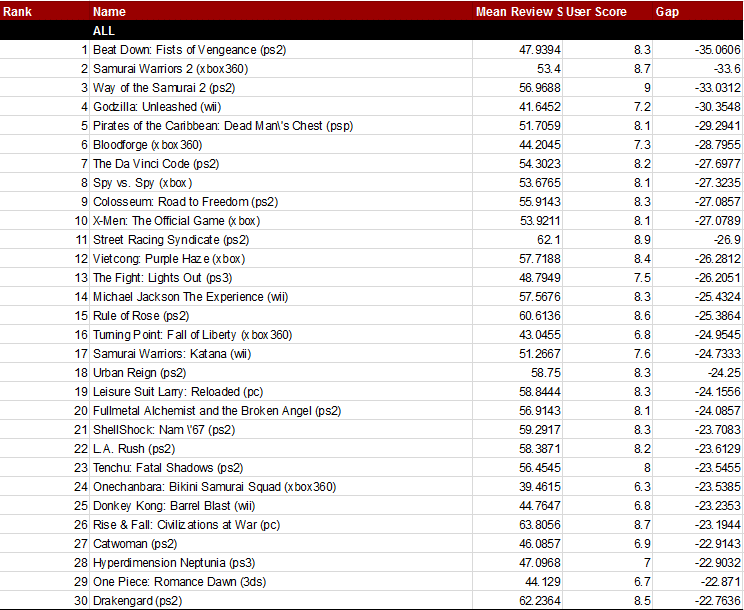 The immediately noticeable trend is that at least one third of this list is comprised of licensed tie-in games, which is honestly not surprising. Games made to release alongside movie launches or to bring awareness to an anime brand are usually made on fast turnarounds, and feature flaws associated with low development budgets, and are often criticised by professional critics.

But much of the appeal of these games is fan service. While It’s pure luck if a gaming site happens to have a Fullmetal Alchemist fan on staff free to review The Broken Angel on PS2, you can guarantee any non critic who purchased that game did so because they’re already an invested fan in the series. This means they’ll likely get more out of references and cameos, and due to being more invested they’ll likely be more willing to overlook flaws. I know for certain I’ve enjoyed mediocre tie-in games at times just for the novelty of playing a character I already care about.

Also, around ten per cent of the list is games about crude jokes and big breasts. Not going to make any judgements about why, but that’s an observable fact.

Finally, it’s interesting to note that the list features a higher number of older games, focusing most commonly on the PS2, Wii and early 360 PS3 generation. This is only based on the top thirty games, but it does suggest that the gap between critical opinion and fan opinion is not as large as it once was. 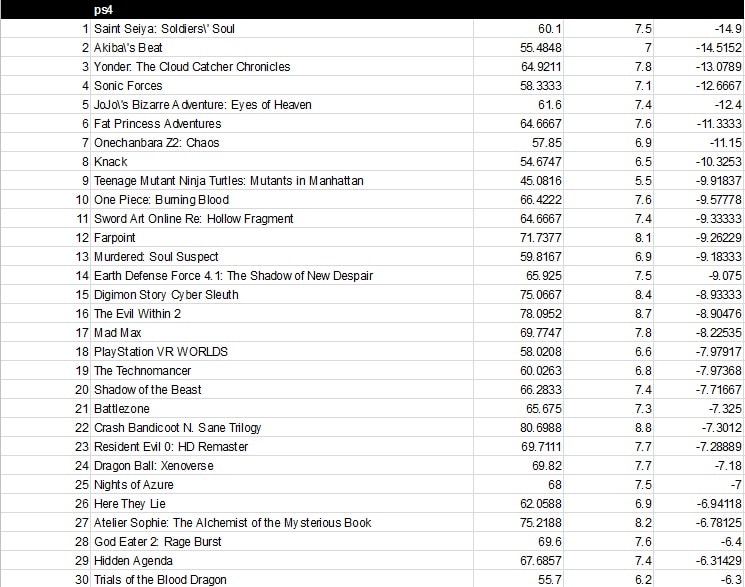 Interestingly, many of the same trends we saw on the all-time list are mirrored on the PS4-specific list. Again, almost a third of the list is comprised of licensed tie-in games. It seems like another example of players with an affinity for the brand against critics who may know less about the franchise and as a result bring a harsher eye to the underlying game.

Also like the all-time list, we see a handful of big breast action games on here, which seems to be a genre where critics and fans just don’t see eye to eye on. Apparently critics just don’t appreciate a nice pair of video game boobs in the way your average player does.

Otherwise, the rest of the list is mainly remakes and sequels to existing games. At least on PS4, it seems like critics place a higher importance on originality than most players, who are happy continuing to play more entries in series they already enjoy. 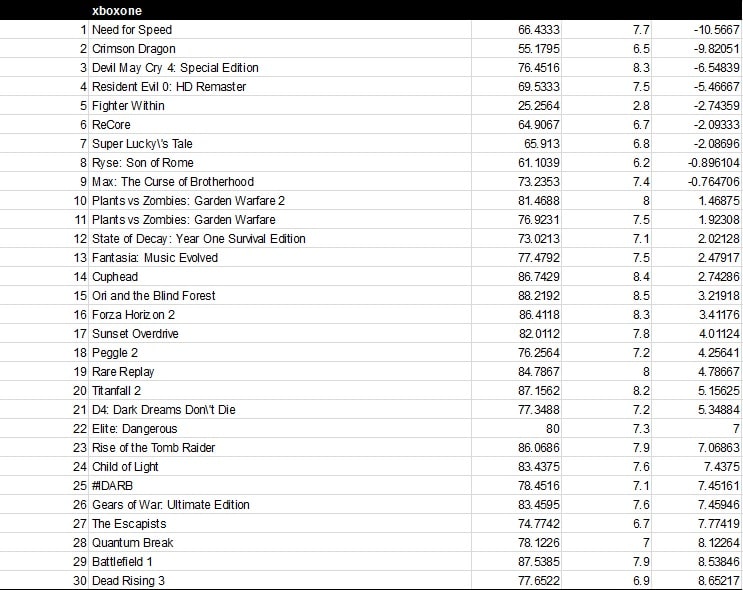 The Xbox One paints a very different picture to our previous two sections. The vast majority of games on Xbox One that players like more than critics are Xbox One first party exclusives, including titles like ReCore, Cuphead, Sunset Overdrive and Rare Replay.

One theory as to why this might be is the relative dearth of content on the platform. Most professional gaming critics have access to all the major gaming systems and, as a result, are less required to get excited about a game out of necessity. If an Xbox One is your only hardware, you need to value the exclusives you do get. 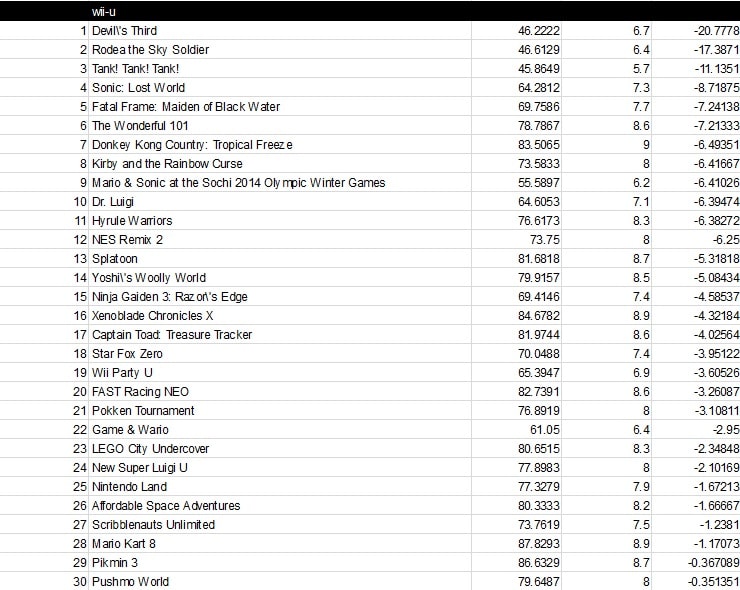 While I’m not going to make a deep dive into the stats, the Wii U pulled up a very similar looking set of data. It too was a system struggling with a drought of strong exclusive software, and as such players often rated its first party library higher than critics did. 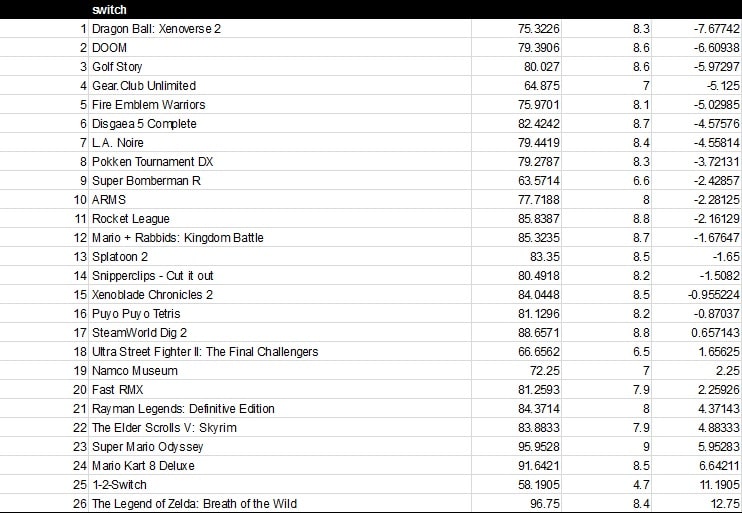 The Switch is in an interesting position for the purposes of this feature, due to the hardware’s relatively new status. There are only 26 Switch games total that have both 30 or more critic reviews and enough user reviews to garner a user score, so here you can see the entire spread of critic opinion and player opinion on Switch games using just 26 games.

Due to our far smaller sample size, it’s harder to see sweeping trends yet on Switch, but there are a few interesting things of note. On the whole, players on Switch seem to be more forgiving than critics of last gen multi platform ports, likely due to many having not had a previous opportunity to play them, with critics more… critical of ports of old games.

Critics on Switch seem to be more willing than players to praise a Switch game that does something new and different with a franchise, even if the execution isn’t necessarily polished. They also seem to like Breath of the Wild, while a load of frankly crazy users are lowballing it.

While the overall all-time trends of gamers liking licensed games, big boobs, sequels and remasters was mirrored on PS4, there are a few different contexts that can skew what the non-critics value. With the Xbox One or Wii U, where the system is arguably lacking games to play, users tend to value the exclusives more highly than critics do.

The average user reviewer is forgiving of ports for games they’ve not played yet, willing to see the good in exclusives if they’re all they have available, enjoy boob games, like specific licensed games and enjoy sequels and remasters – all a little more than critics do. Many of these differences ultimately boil down to critics having access to every system and constantly jumping from game to game looking for things which are new, novel and surprising. Except the boobs thing. I have no idea why games critics are not as into boobs as you lot.

Related: Sony makes the worst exclusives, according to science