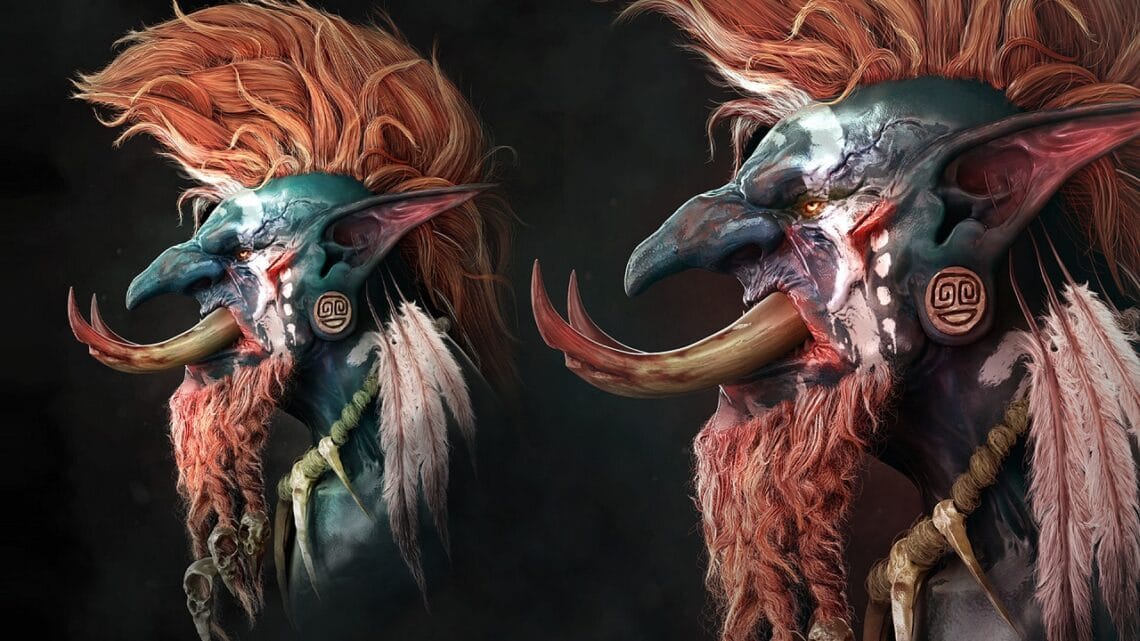 Patch 1.12, Drums Of War, is the build of choice for the majority of private servers running the original World Of Warcraft. It was just an interim patch between the introduction of Naxxramas, the notoriously vicious 40-man final raid, and WOW’s first expansion, The Burning Crusade. The logic goes that it’s vanilla WOW’s final and best incarnation, for in the two years between World Of Warcraft’s release and version 1.12, myriad fixes and quality-of-life improvements had turned a rickety, spit-and-glue MMO into a real cultural phenomenon that was fast approaching ten million subscribers.

By this time, you could have more than one action bar on the screen. The Looking For Group chat channel had come into existence to help organise dungeon runs. Caps had been placed on each dungeon’s player count to stop people zerging tough fights. Player-versus-player became ranked, heralding fiercer clashes over the Horde and Alliance haunts of Tarren Mill and Southshore, and Battlegrounds were patched in. Shortly afterwards, the ability to queue for Battlegrounds from the comfort of capital cities was added, while top-tier gear no longer had placeholder textures. By patch 1.12, it was clear World Of Warcraft had reached completion, incorporating features that a modern MMO designer wouldn’t dream of leaving out. 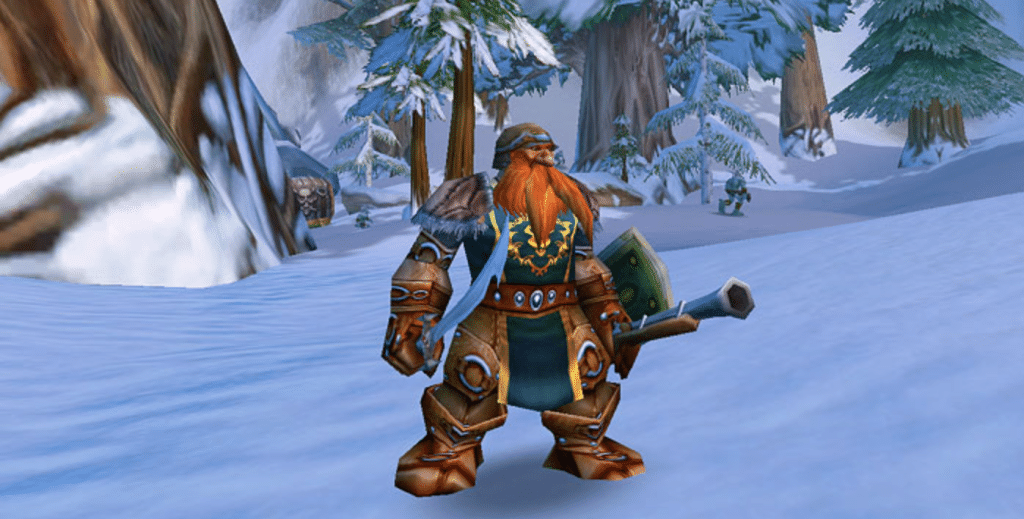 Patch 1.12 was also the build during which South Park’s seminal Make Love, Not Warcraft episode aired, and though it set out to poke fun at the acne-ridden, wrist-brace-wearing, Dorito-huffing brand of WOW players, the attention of Matt Stone and Trey Parker was also validation of the view that Blizzard’s work was a landmark social happening as much as a game.

However, unless you’re driven by nostalgia, 1.12 is unplayable by today’s standards, actually offensive to the modern sensibility in a similar manner to corporal punishment. It was all quite acceptable at the time – a mantra among historians is that we mustn’t judge the past by modern standards – but if you find yourself at a loose end, go ahead and log on to the likes of Nostalrius, Warcraft’s largest private server. You will be appalled.

“Unless you’re driven by nostalgia, 1.12 is unplayable by today’s standards”

The culture shock starts at the character creation screen. If you want to play a Paladin, the armoured spellcaster, you have to play on the Alliance side as a Human or Dwarf.  If you’d like to be a Shaman, you’re stuck as a Troll or Orc. On paper it might look like a minor issue, but imagine a modern MMO splitting friend groups or denying users their preferred class for the sake of lore.

In fact, can you imagine today’s MMOs daring to refuse players access to anything they pay for? World Of Warcraft certainly doesn’t. Since the introduction of the Dungeon Finder in Wrath Of The Lich King any player could jump into any dungeon with an automatically assembled group and blitz through for a pat on the back and some shiny rewards. Later, the Raid Finder did the same thing with endgame content, a declaration that all players were entitled to see all that WOW had to offer. 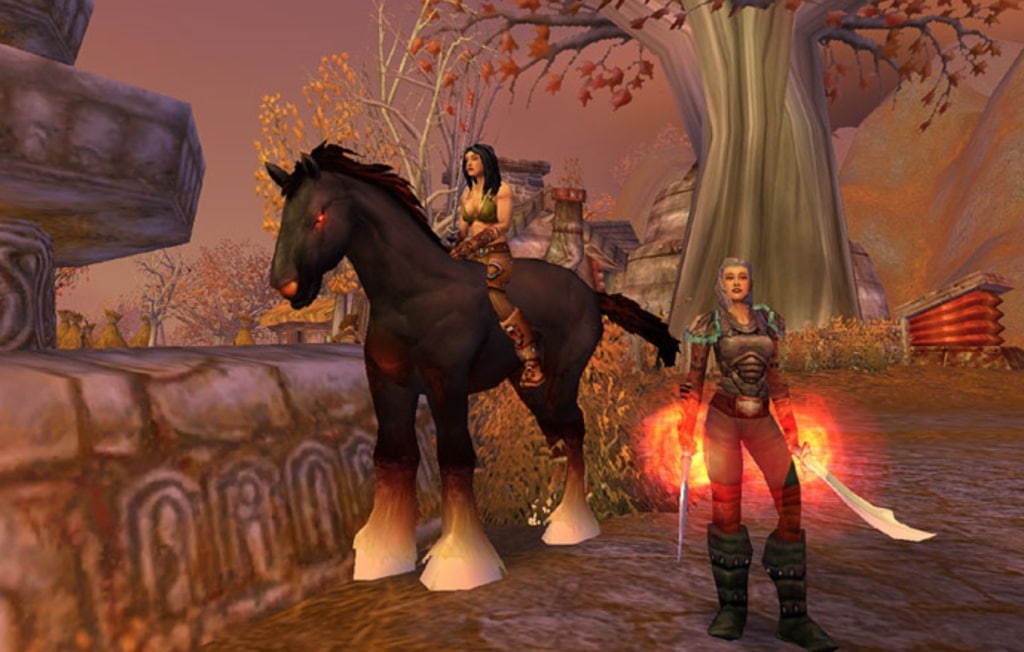 Vanilla WOW had no such philosophy. Without determination and time to burn, you would never make it off the starting line, never mind to the endgame raids.  As a fresh Troll on a private server, you spawn into the Valley Of Trials, the starting zone shared with the Orcs for reasons of budget behind a veil of lore. Your first mission is to slay ten mottled boars or, for the other races, some similarly arbitrary conjunction of number and creature – the quest structure that launched a thousand memes.

If you’re a spellcaster, these level-one boars present a genuine threat to life. You stand stock still, pressing the hotkey for your sole spell once, twice, thrice, and you’re out of mana. The boar isn’t dead, so you club it repeatedly with your puny weapon – a weapon in which your skill is so low that many swings miss. Nevertheless, the boar will drop after a good 30 seconds’ hammering. A clean kill. At this point, your health is perilously low and your mana, as established, is spent, so you’re obliged to eat and drink until you’re back in fighting form. Nine more boars to go, assuming that enough have spawned to satisfy the murderous population. If not, you’ll need to queue in the European style, sprinting madly for each creature that pops into existence and trying to tag it first.

Far from the slip-up of a fledgling MMO developer, this is all by design. One spectacular example of a vanilla legendary quest structure can be found in Silverpine Forest, titled A Recipe For Death: “He mentions a very rare Hardened Tumor that he discovered on a Vile Fin murloc,” the quest text reads. “Apparently the tumor is so rare Berard was only able to obtain one.” Raptors in WOW are renowned for dropping fewer than one head when killed, so when a quest states explicitly that a MacGuffin is rare in the extreme, you know there’s a long day ahead of you. World Of Warcraft was always brazen in making you sweat for the simplest of rewards – in this case a soon-to-be-replaced cloak and a potion than makes you run a bit quicker.

For 60 levels, most monsters are an effort to dispatch, unless you invest serious gold in rare gear. And that’s no trivial thing: before hyperinflation set in, in The Burning Crusade, each gold piece was hard-won. At 1,000 gold, high-level mounts that took the hassle out of traversing the world were out of reach for many players. 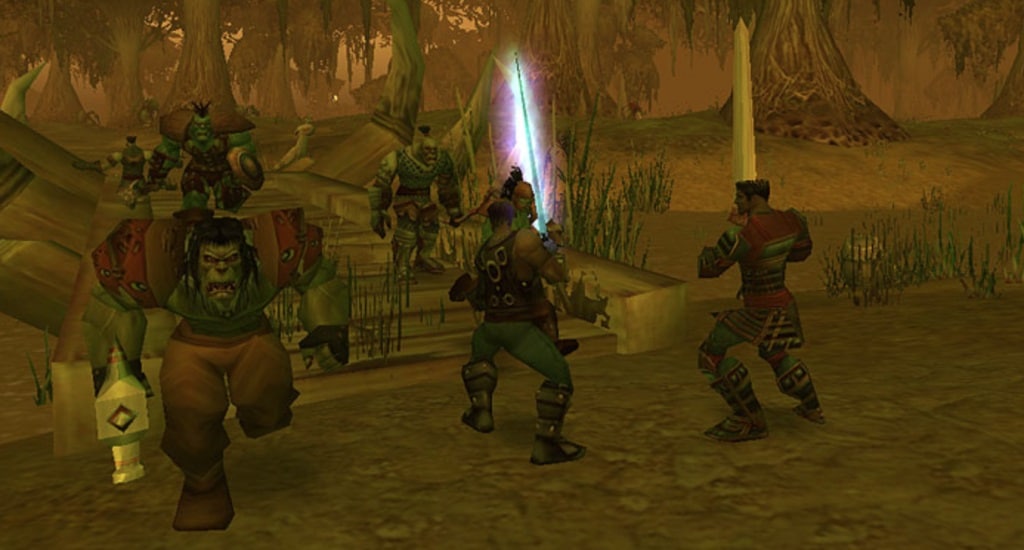 Perhaps the most retrospectively egregious decision was how hybrid classes were treated in the late game. The appeal of Druids and Paladins lay in their flexibility. Shapeshifting Druids in particular had the ability to tank, heal, cast spells or batter the enemy, the natural trade-off for a jack of all trades being mastery of none. But in a time when WOW’s raids left no room for error and a few points of health or damage dealt could mean the difference between success and 40 dead players, who would want a master of none on their team? Raiding Druids had to heal, because that’s what they were best at and other classes could make better use of the damage-dealing gear. Everyone was expected to play their part. World Of Warcraft demanded sacrifice of you as a player, and therein lies its brilliance.

We know why most people stopped playing WOW, and why many swear off MMOs altogether: the grind, the sensation of having a second job, the hours of commitment even low-level dungeons used to demand. Fair reasons, all, and cited even by Ion Hazzikostas, WOW’s lead designer, as driving later expansions’ push for accessibility. But why don’t we see WOW-like success from the MMOs that pledged, however honestly, to eliminate the grind? Games such as Warhammer Online: Age Of Reckoning, Star Wars: The Old Republic, and WOW as it exists today.

“At the time, WOW was the player-friendly option, but no MMO that has tried to be friendlier has found success”

Naturally there’s an element of timing to it. When WOW launched in 2004, EverQuest and its sequel (released a month prior to Blizzard’s game) were its only real competitors. WOW was technologically ambitious, its near-seamless open world a stark contrast to EverQuest’s jarring zone transitions. The great bulk of lore Blizzard had thanks to the Warcraft strategy games was also refreshing in contrast with EverQuest’s D&D staples, while the cartoon style disguised graphical sins where EverQuest II’s realistic approach could not.

Strange though it might seem, however, it was WOW’s ease of access that gave it muscle. The saying goes that in EverQuest you couldn’t scratch your nose without help from about 40 people and a resurrection afterwards. At the time, WOW was the player-friendly option, but no MMO that has tried to be friendlier has found success. 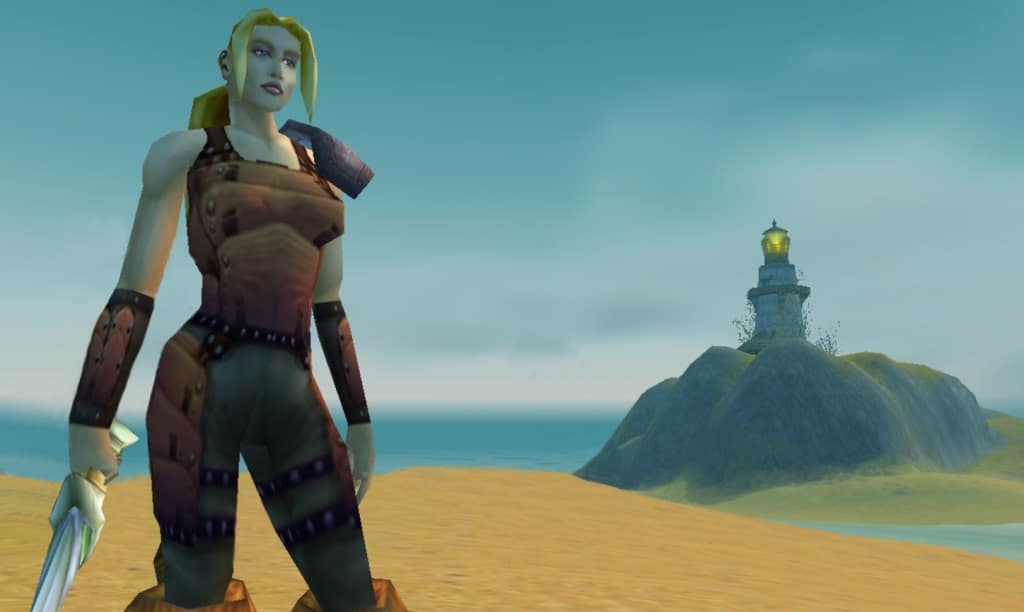 The sensation of having a second job was what distinguished the MMO from singleplayer RPGs. It’s what distinguishes vanilla WOW from the theme parks that constitute modern MMOs, in which you rush from exciting encounter to high-design set piece, the game desperate to outdo itself at every opportunity.

World Of Warcraft gated off basic pleasures. If you wanted to start raiding with your friends, you had to work, with all the suffering the word connotes, to buy, craft or farm the necessary gear, complete the quests, and then commit four hours of your evening. Today, we can walk away and play another game if we’re not entertained, but in its day World Of Warcraft was kind. You wouldn’t have it easier elsewhere.

Let’s be clear: killing boars, farming ingredients and grinding loot were never considered fun in and of themselves. No one flew out of bed in the morning propelled by anticipation of a day’s toil. Rather, you sat down to the grind with steely determination because it made the reward worth it. To put in the ground work, to do what must be done, to sweat for the chance to battle alongside your friends and face challenges greater still made a hero’s reward of the scant handful of gear from a raid boss your guild had spent weeks defeating.

The agony of the journey made the end sweeter. It’s only after the hard day’s hike that you can look back and be proud of what you overcome. At a gym, you pay to grunt and sweat, to eventually better yourself. You tackle Dark Souls’ Bed Of Chaos yet again because victory has become its own reward. The original World Of Warcraft would never survive as a subscription game these days because we’re well equipped to avoid hard work – WildStar’s subscription model collapsed for just that reason. But in opting for games that promise us instant entertainment, the sheer exhilaration of overcoming hard labour is confined to private servers running patch 1.12.