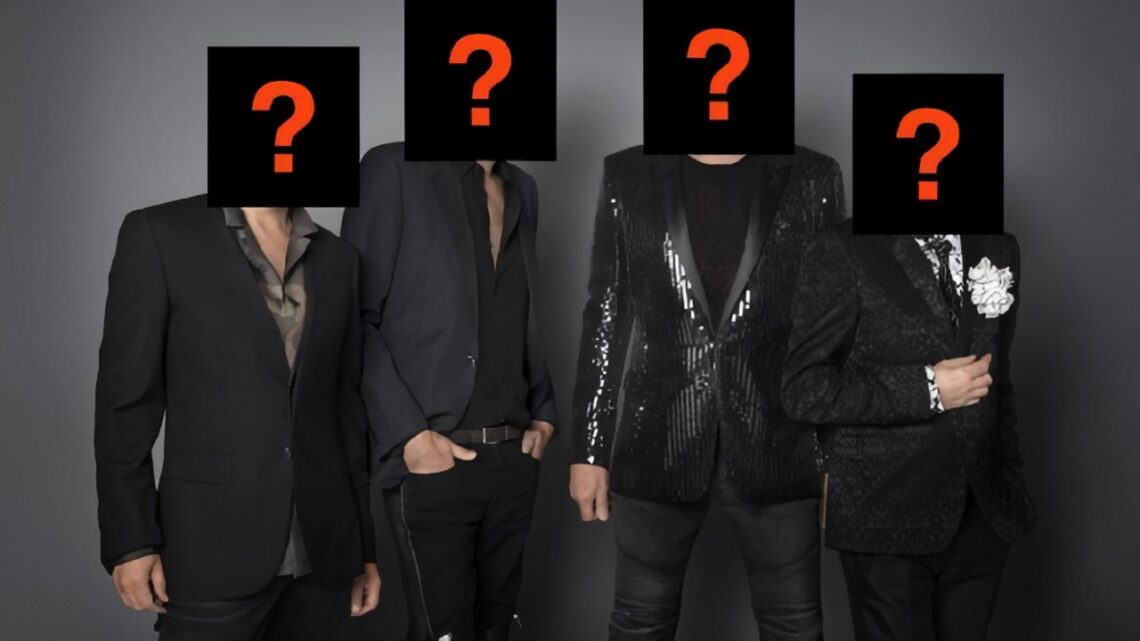 The stories of Second Life and Duran Duran mirror each other in a strange kind of way. At their height, both enjoyed immense popularity, and both have slowly slipped out of the spotlight in recent times. Linden Lab’s life simulator was released back in 2003 and boasted a million regular users in its prime. Duran Duran, meanwhile, emerged when the New Romantics ruled the airwaves, and their albums went triple platinum. These days, neither commands the headlines they once did.

In a way, it seems prudent that these two former titans of pop culture would sooner or later cross paths, and the Duran Duran Universe, an official Second Life world dedicated to the band, was the result.

The Duran Duran Universe (DDU) first opened its doors in 2011 – following five years of delays and almost a decade after the launch of Second Life – and the band have been hugely supportive throughout its lifetime. A Facebook group dedicated to the DDU even boasts videos of the band performing live gigs, DJ sets, and book readings via their Second Life avatars. But how did this seemingly unlikely collaboration between two cultural titans come about? 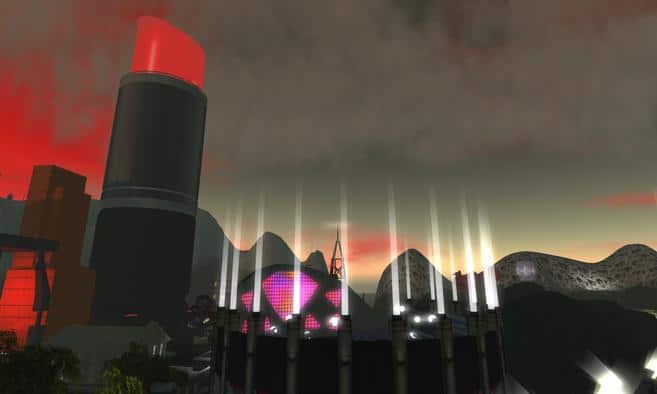 When I ask Peter Gray, senior director of communications at Linden Lab, he tells me that, like almost everything else in Second Life, the Duran Duran Universe experience was created by users, “If I recall correctly, I think that the DDU may be a collaboration between avid fans of the band and the members themselves”.

One of those users, Christina von Wellean, is the community manager of the DDU. Christina, who owns a cosmetics company in the real world, has been a fan of the band for over 30 years, and bought her first Duran Duran record when she was 11.

According to Christina, it was Duran Duran’s keyboard player, Nick Rhodes, who came up with the idea of DDU first. The band had been told about Second Life by a social media consultant and, keen to take advantage of new technology, Second Life seemed like the right way to go. Work on the project began in 2006, with designs and ideas all provided by the band itself. However, while Duran Duran’s heavy involvement helped give DDU an unmatched level of authenticity, their busy touring and recording schedule meant that it took five years for construction to be completed. 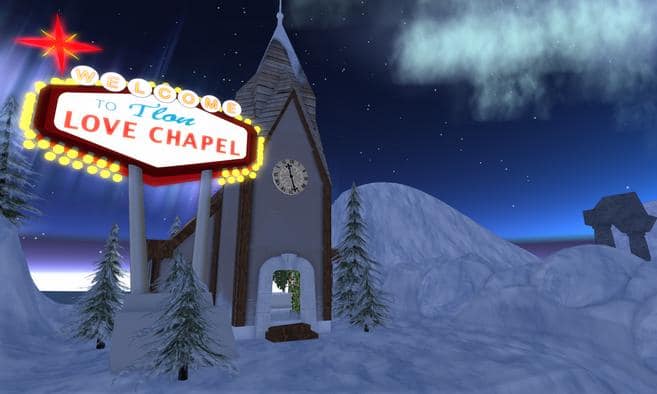 The Duran Duran Universe proved to be an immediate success and, in its heyday, the community had several thousand members, with a few hundred die-hard fans regularly showing up to in-world events. “It’s a wonderful way to connect with fans” Christina tells me, “I often wonder why more artists aren’t on Second Life.”

Of course, the only way to truly understand the Duran Duran Universe is to visit it. I wanted to see it for myself and to speak with those who go there. To do that I would have to dive in, and live my own Second Life.

As I grappled with the mechanics and UI of Second Life my head was swimming with questions: What would I find in this long-forgotten world? What mysteries lay ahead? It didn’t take long to find out.

When I first arrived inside the Duran Duran Universe, I was confronted by a ring of monoliths, each displaying an advert for bassist John Taylor’s auto-biography, released more than five years earlier in 2012. I feared the worst; despite Christina’s hard work, was the DDU nothing more than an (outdated) marketing tool? 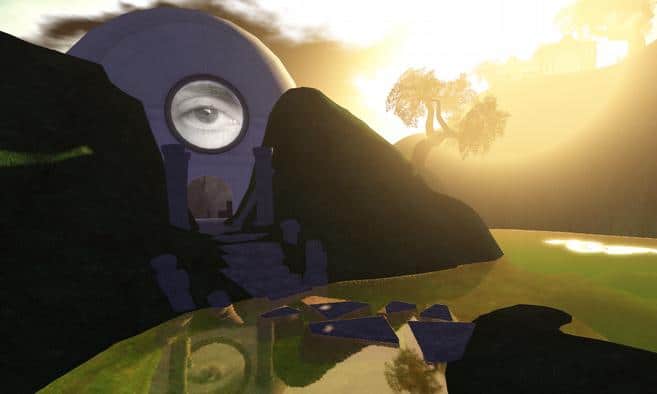 True to its name the Duran Duran Universe is a vast and diverse world. It features four distinct areas: Azizi, Sanhedralite, Khanada, and Tlon. Each one overflows with iconography designed by the band, and features different activities for visitors to enjoy. There’s a virtual winery, a nightclub deep in the belly of a crashed spacecraft where fans can dance the night away, and the Chapel of Love, offering breathtaking view of the Aurora Borealis. Honestly, it’s a lot to take in.

Wandering through an empty, neon-lit city-scape that could have been plucked from Blade Runner if it wasn’t so blocky, I came upon ‘The Skin Dive – a bar that, back when the DDU was still a bustling virtual destination, offered competitive arm-wrestling and hosted a mud-wrestling ring. Now though, it was silent, and useless to me as its sole inhabitant. Next came a nightclub, and another. Sadly though, every dance floor stood empty and the automated virtual DJs stubbornly refused to play the hits, favouring Duran Duran’s more recent releases.

I suppose that’s the luxury of owning your own universe. 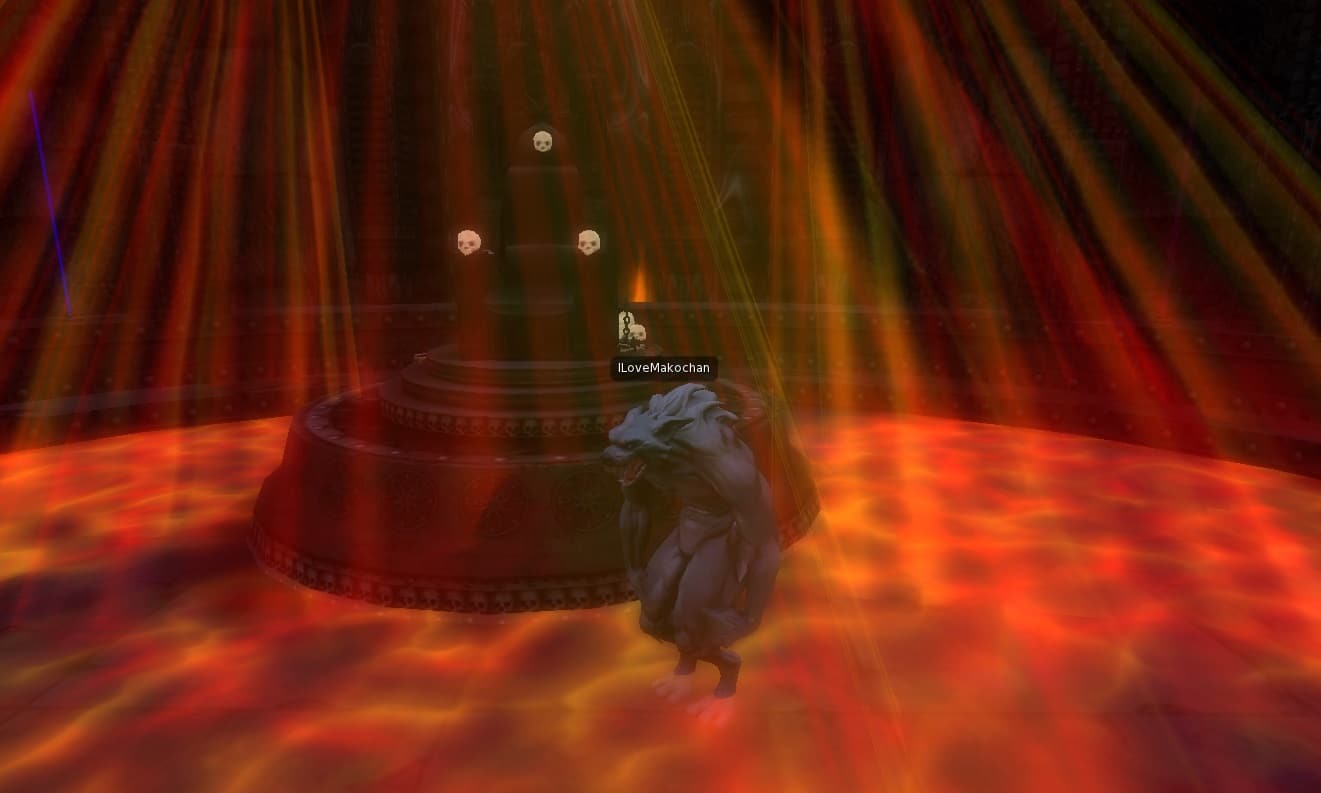 Back outside, time and space seemed to be woozily collapsing within the DDU. Day and night cycles would stretch and distort, sometimes lasting for ages, sometimes passing in seconds. Clearly not the work of a master programmer.

And still I had to wonder, where had everyone gone? Christina had told me that thousands visited the DDU but, now, not a soul could be seen now.

Just as I was beginning to lose hope of meeting anyone, inspiration hit. Trying to make sense of it all, I visit the DDU HQ. However, it offers scant information about the world’s history or its decline; the only thing I could find was a CCTV feed for the building’s long-gone security team – perhaps the Duran Duran Universe wasn’t quite the paradise that I’d been led to believe. 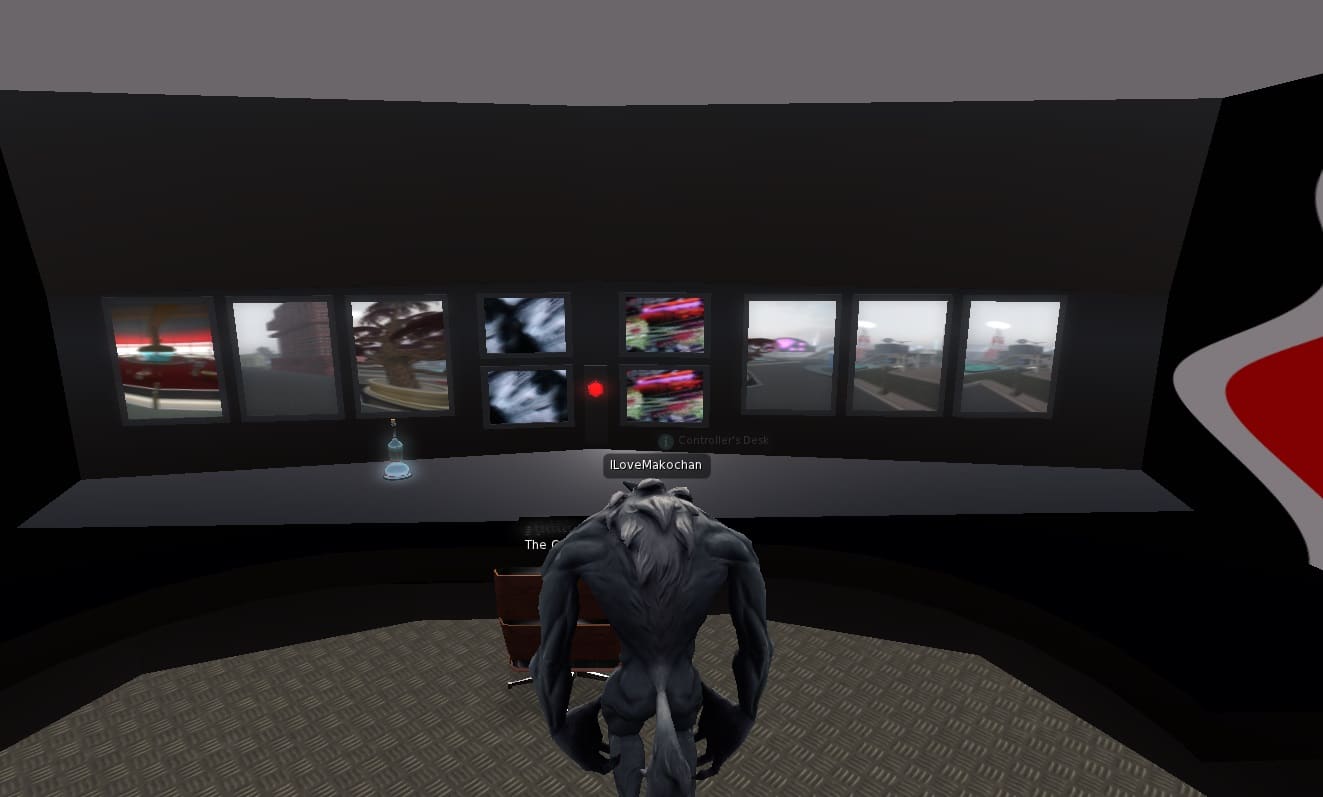 Then I had another idea: maybe I could uncover some answers in the band’s dressing rooms at the DDU’s concert arena, Khanada Park. It was here that I encountered the only other living creature that I’d meet in my entire time in the DDU: John Taylor’s dog, Boxer. When I asked him where his owner was, he simply growled and recoiled from me. Then I noticed something peculiar.

Each member of the band had been left a single red rose on their dressing room table. All but one, that is – Nick Rhodes, the mastermind behind the DDU. Nick’s room was, of course, the most curious of all: Perfectly white, with rose petals strewn across the floor, surrounding an empty coffin that stood in the centre of the room. The final piece of this mystery? A flamethrower slung across a clothing rack. What undead monstrosity had been imprisoned here? And with the coffin empty, had it escaped? 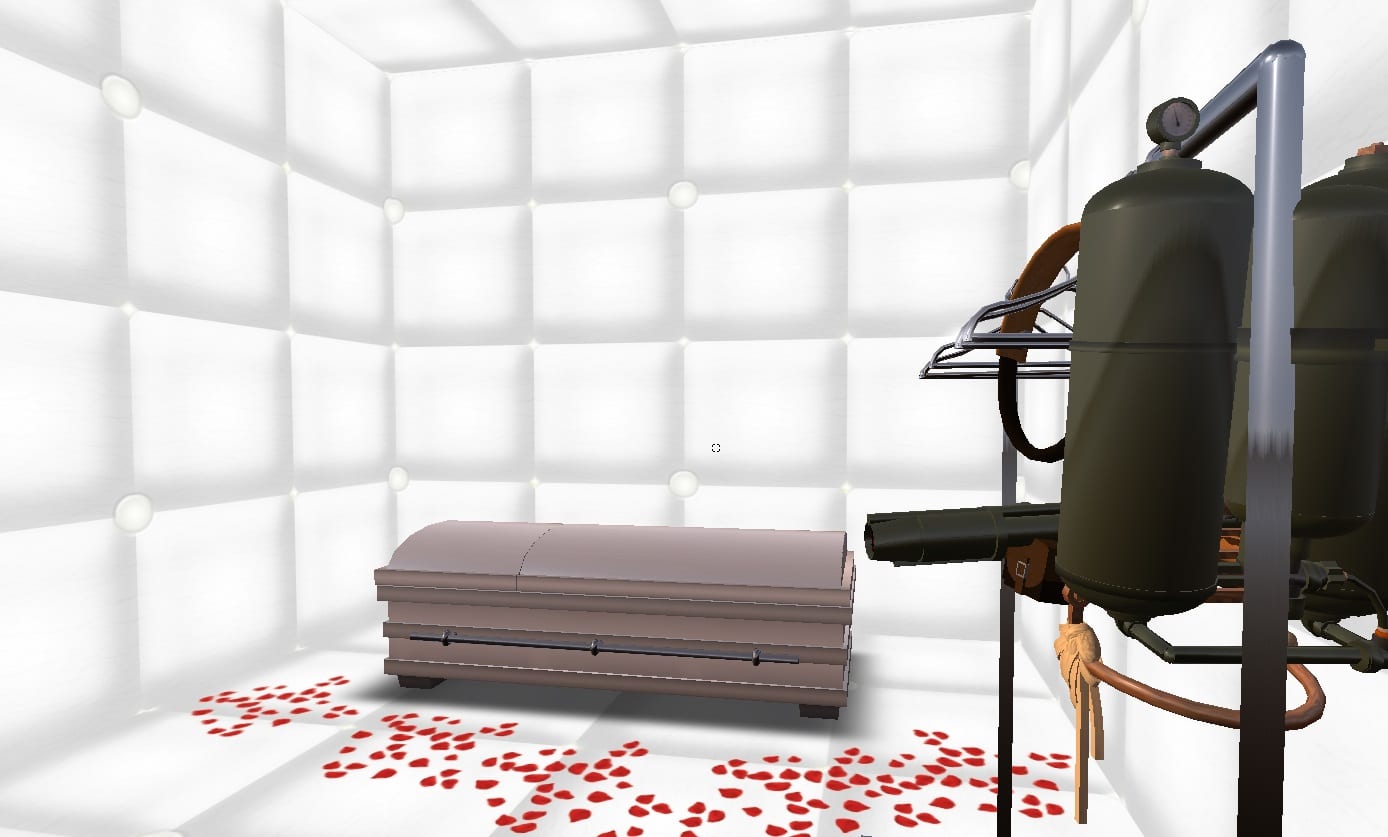 High above the DDU floats the Tower of Hades, an imposing fortress of obsidian, all jagged points and threatening spires. It almost looks as if World of Warcraft or Baldur’s Gate had somehow crashed into this dimension.

Ostensibly just another of the nightclubs that litter the DDU, the Tower of Hades’ interior seems to defy the Duran Duran brand as boldly as its exterior. A nightclub dedicated to one of the most successful bands of the new-wave movement should not resemble Saruman’s throne room – yet here, in the middle of the dance floor, was a throne that wouldn’t have looked out of place in the Lich King’s lair. 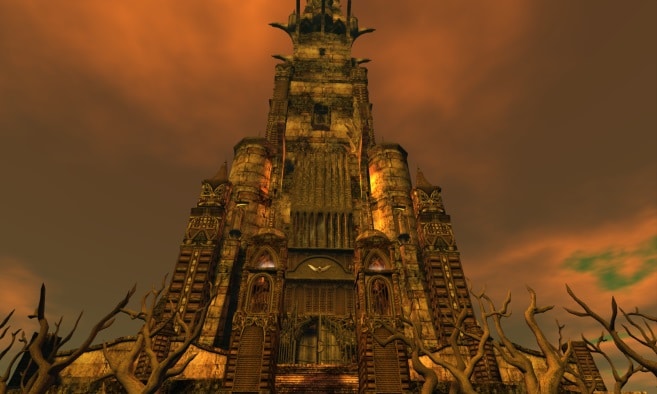 Caroline informed me that this incongruous monument is a later addition to the DDU. A palace built for a themed birthday party for Nick Rhodes, and I’m told that it was designed to reflect his love of devils and vampires.

It all seems innocent enough, but again I recall the mysterious absence of the DDU’s once-thriving population. And after all I’d learned, I can only come to one possible conclusion: the DDU is a necrotic trap constructed by Nick Rhodes to drain the life force of all those who visit. It’s the only way of making sense of the anarchic world of the Duran Duran Universe.

I lingered in the Duran Duran Universe for hours and still nobody else showed up, nobody came to dance or mud wrestle. It dawned on me that Second Life must be filled with worlds like this: virtual spaces that users spent years labouring over, that allowed a genuine sense of community to be formed, but which mostly now lay barren and forgotten, with histories that will never be archived. These worlds will remain untouched long after their users cease to visit – like virtual museums – until someone at Linden Lab decides Second Life has run its course.

Linden Lab is currently working on a new platform for virtual experiences, Sansar. Much like Second Life it will focus again on user-generated content, although this new system is designed with devices like Oculus Rift in mind – with the stated goal of democratising VR. 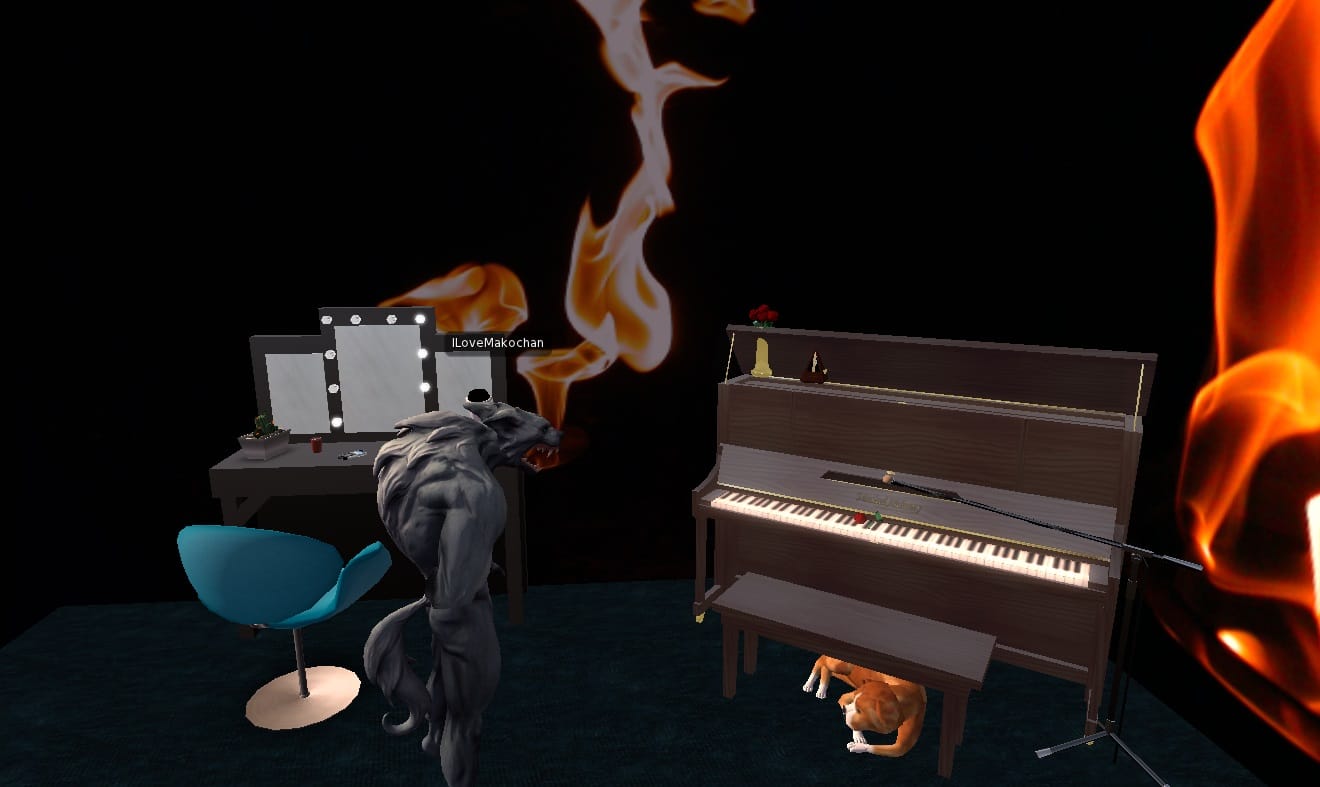 Christina isn’t aware of any current plans to replicate the DDU in Sansar, but whatever the Duran Duran Universe’s future holds, it’ll no doubt be remembered fondly when it reaches the end of its lifetime.

For fans, many of whom would never have the chance to meet their idols in real life, it provided a very personal experience. As Christina remembers, the fact that the band were always so engaged with the DDU, and were really behind their avatars, would drive people crazy. She’d often receive phone calls from ecstatic fans, crying because they were so “overwhelmed and happy”.

And while I was unable to get word from the band itself, to find out what the Duran Duran Universe meant to each member personally, it’s evident that their virtual space, although long-deserted, will live on in the memories of the fans who were lucky enough to experience it in its prime.

A history of griefing: gamers who ruin your day for kicks – Ganker

[…] it’s to make a point, and sometimes it’s even to make a profit. In the online world of Second Life, for instance, where players purchase land with real money, griefers have been known to snap up […]