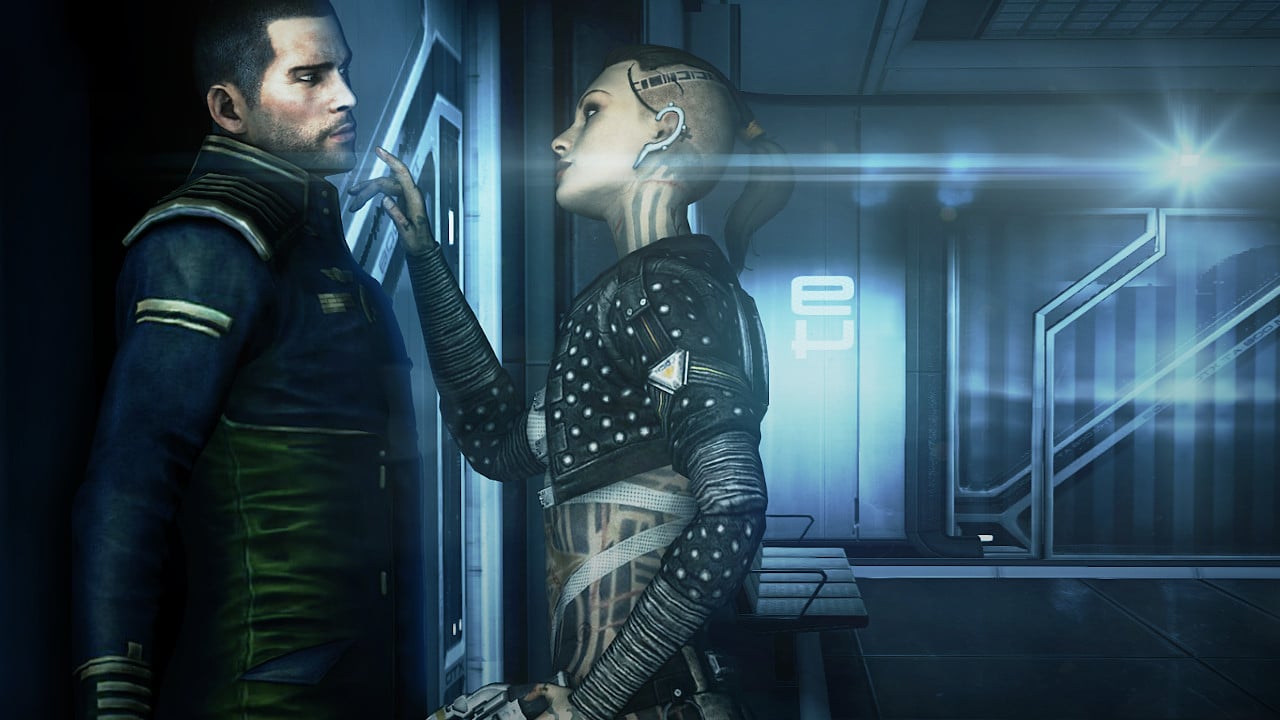 Times change and the story of Mass Effect 3’s ending has itself acquired an ending, one that’s easier to understand and more satisfying than the ending to the series’ story: most of us hate it and the developers have said sorry. So let’s move on and talk about love.

Mass Effect 3 offers you ten potential love interests. Ten. That’s the equivalent of a week in Ibiza right there. And remember everything else that’s going on as well – old Shepard is busy, that’s for sure. Some of these love interests aren’t even human. Again, a bit like Ibiza.

Do people want this, though? Does love have a part in games? And is it possible to do it well? Not it, obviously. I’m talking about a romantic plot. Well, Mario has been after his princess since effectively the dawn of time. You could argue that this represents a perfect romantic plot, albeit a simple one. Everybody understands the need to rescue a loved one. It’s noble, it’s a strong driving force and it’s got a clearly anticipated payoff. It’s shorthand for a universal reason to care, requiring no explanation. Love, they say, conquers all. Even if you’re a plumber.

Japanese games often have elements of romance in them, and it’s fair to say that it feels right that they do. Look at the Final Fantasy series, for example – it’s part of what makes them the force to be reckoned with that they are. But what do we think about implementing the tenderness of love in European or American games?

Many times I’ve worked on projects that have been tasked with providing emotional appeal to the player: making the user laugh, cry, believe and care. It’s easy to see how love fits into that. As we’ve said, it’s easily understood, universal and a powerful motivator. But the trouble is that it’s difficult to do well, it’s often clichéd and mockable – and it slows everything down. By its very nature, it gets in the way of the action and requires talking and cutscenes and, well, conversation. I know this because I once went out with someone. You do need to talk to the other person sometimes, despite what you might think to the contrary.

So love gets in the way of a good game. Games struggle with the subtleties employed in films to show such emotions. And, crucially, putting a love interest in a game won’t make you care about the characters outright. All you can hope for is that, if you already care about them, the love interest deepens the gaming experience without getting in the way. Oh, and it has to be part of the plot to do that. So she has to betray you, or get kidnapped, or something. She? Bit sexist, you say. Come on, most games are still played primarily by males.

Also, how much control do you wish your player to have? Nothing’s worse than a game telling you someone’s gorgeous, and that you’re falling for them. Well, some things are worse. Paper cuts for example. But players can’t be told how to feel. Someone can fall in love with them – that’s fine. But it should be possible to ignore such moon-crazed idiots. Just like real life. Or to wreck it for them, just like real life. This is worth considering, because we all know that players will always push what’s possible to the extreme. It’s either terrifying or cathartic, but if we can destroy things, then we’ll destroy everything. Give a gamer control of the gentlenesses of romance and it’ll be carnage.

Perhaps our game can deal with love, but not involve the player. Maybe we could include a couple of NPCs making the beast with two back-up drives… no, this is a non-starter because the player isn’t included, and thus – unless it affects the plot – it’s entirely irrelevant and annoying. Why are two people, neither of whom are you, carrying on like teenagers? The game is about you, surely? Does it say ‘gooseberry’ on the cover? No. Where’s the rifle? I’m in the mood to kill those star-crossed cannon-fodder…

So far it’s all sounding a bit bleak for love in videogames. But dig out Knights Of The Old Republic and you’ll find that did Jedi amore pretty well. And Mass Effect 3, with its multiple permutations of coupling, was OK at romance too. Perhaps letting people play as a female character is the key? Actually, now that I think about it, all that does is pander to the smut billowing round the average male games-player’s foetid brain. So how do we approach it?

Firstly, don’t force it on the player. Don’t highlight it. Ideally, let them twig that it’s a possibility – people love discovering these things rather than being told. Secondly, give them the chance to ignore it, or even end it. There could be repercussions, but at least they had the choice. Which leads us neatly to the fact that the love interest should play a direct part in the tale. No, let’s not have her die, or get captured. But let the relationship matter in more than simply emotional terms. And finally, sex: however you do it, people will laugh. This is true in games as well.