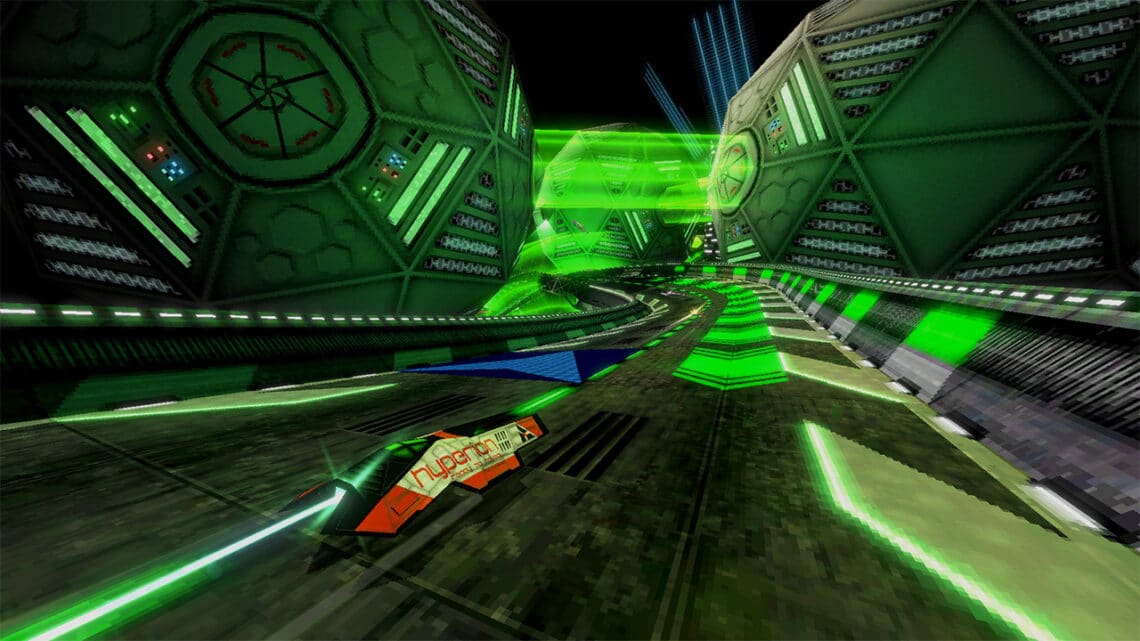 In the 1990s, games like Wipeout and F-Zero ushered in a new genre of racing games that aren’t confined to the realm of wheels and normal gravity. They’re known as anti-gravity racing games.

While futuristic anti-gravity racing games like Wipeout and F-Zero aren’t extremely popular these days, there are still a few good titles that you might have overlooked.

I’ve picked out a mix of retro and new anti-gravity racing games that you should check out if you enjoy games like Wipeout and F-Zero.

AeroGauge was exclusive to the Nintendo 64 and it has a few key differences from Wipeout and F-Zero. This game requires you to fly a hovership vertically to avoid obstacles and fly through tunnels as you race your opponents. But since you need to control your ship’s height as well as direction, AeroGauge can’t be as fast as Wipeout and F-Zero. It’s a cool concept, but it’s not quite as fun as other AG racing games.

There hasn’t been a mainline F-Zero game since F-Zero GX for the Nintendo GameCube. Thankfully, developer Shin’en Multimedia has been filling the void with its own anti-gravity racing games for Nintendo Consoles. First they released Fast Racing League for the Nintendo Wii, then Fast Racing Neo for the Wii U, and their newest installment is Fast RMX on the Nintendo Switch. Fast RMX has a high learning curve, but it’s a bit more balanced than its predecessors. If you like F-Zero, then you definitely need to give Fast RMX a spin.

Star Wars Episode I Racer was contemporary with the original Wipeout trilogy, and it even outsold its competitors with worldwide sales of 3.12 million. The game isn’t as speedy and challenging as other anti-gravity racing games, but you might enjoy playing this game if you’re a fan of the Star Wars series. Star Wars Episode I Racer was re-released in June 2020 on the PlayStation 4 and Nintendo Switch.

Pacer is the closest thing you’ll get to a new Wipeout game that plays like the modern games in the series. The graphics are completely stunning and it features music from CoLD SToRAGE, who previously composed memorable electronic tunes in earlier Wipeout games. Additionally, the development team includes people who worked on Wipeout 3 for Psygnosis Leeds.

Cyber Speedway was released early in the Sega Saturn’s brief lifespan, and it shows. The game isn’t as refined as later anti-gravity racing games, and that makes sense considering the fact that Cyber Speedway was released a few months before before Wipeout, which was a genre-defining series. Regardless, the game offers speedy racing and the game is worth picking up if you own a Sega Saturn — it’s pretty cheap for a Saturn game.

Redout was released in 2017, which was the same year Wipeout Omega Collection was released. Some people claim Redout has easier controls than Wipeout, especially for beginners, and you might prefer Redout’s colorful art style.

Tube Slider is commonly referred to as a clone of F-Zero GX. And that’s not too far off the mark — both games are AG racing games that were released on the GameCube. Tube Slider was even pitched as an entry in the F-Zero series. The game is pretty straight forward — race through a tube and strategically use your booster to outspeed your opponents.

Antigraviator is yet another modern anti-gravity racing game, but it hasn’t really taken off like the others. The game failed to receive its funding from a Kickstarter campaign in 2017, which was a year saturated with similar releases. After finally being released in 2018, fans had a lukewarm reaction to it, often claiming the game is underwhelming compared to Redout and Wipeout. Still, Antigraviator is a solid anti-gravity racing and it’s worth picking up if you ever see it on sale.

Trailblazers has been described as a mixture between Splatoon and Wipeout because of the game’s unique painting mechanics. Essentially, the more you paint the track with your color, the faster you’ll go. In the 3v3 game mode, you’ll work with two other racers to paint the track and outspeed your opponents. You can also play in story mode and learn the lore behind the game’s cartoony characters.

[…] want to make an impact, allow me to suggest the Falcon Punch. Developed by Captain Falcon, of F-Zero fame, it is one of the most effective punches you can throw in a fight. You may also know it as the […]