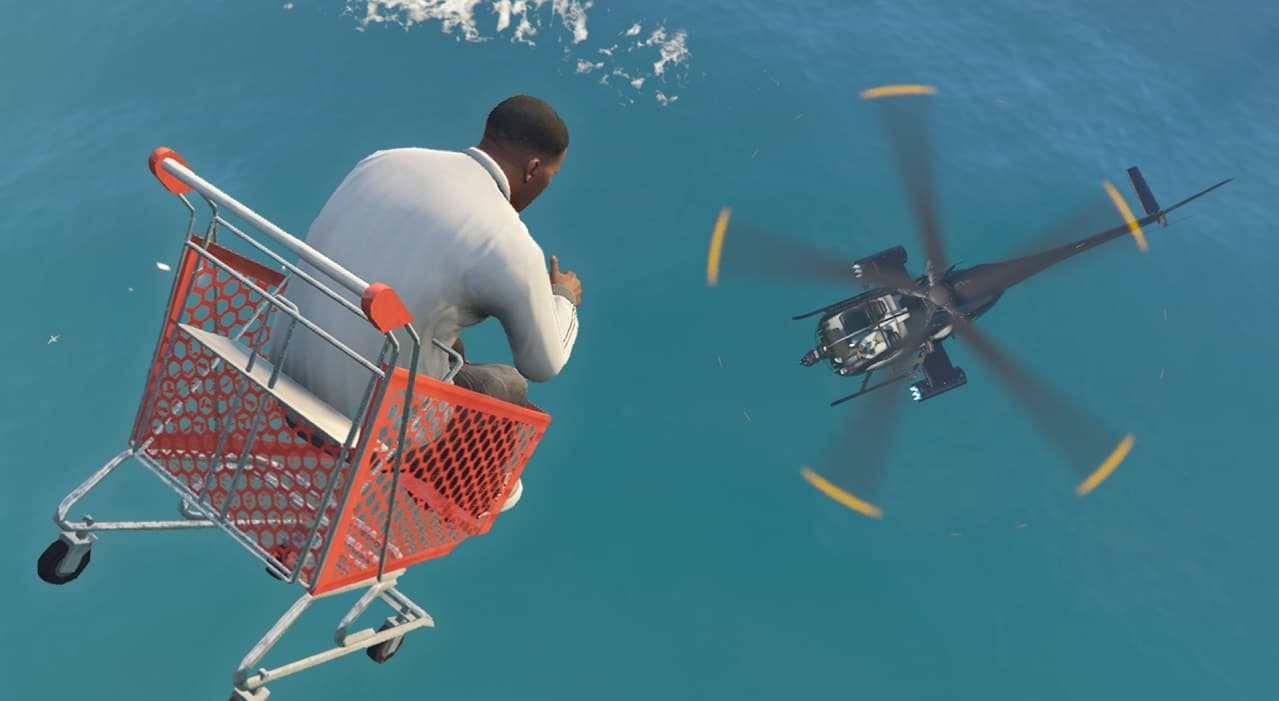 Grand Theft Auto IV found itself at the top of the charts again this week for both the PlayStation 3 and the Xbox 360, which means the population of Liberty City is still growing by the day. But whether you are a veteran who picked up the game on launch day, or a noob who just got off the boat, we’re guessing you’ll find a couple of cool objectives in the missions below to keep the fun rolling in for months.

1. Carjack some poor sap and let them clutch the door before you take off, then drag them screaming down the street.

2. Snipe people from the top of the Screamer in Firefly Island.

3. Do a burnout until your rear tyres EXPLODE! Hold brake and dump the accelerator.

4. Perch yourself on top of the Rotterdam Building and take out police choppers like freakin’ King Kong.

5. Spawn a motorcycle (you filthy cheater) on top of the Rotterdam Building and leap from it to another skyscraper.

6. Steal the Turismo from the top floor at the car dealer near the Perseus clothing store in Algonquin. Drive it straight through the plate glass window and jump out into the street – a la Gone in 60 Seconds. That’s money.

7. Crash out through your own windscreen in a major accident.

8. Steal a chopper and tempt a copper to clutch onto the skid before you soar away. Watch the poor bugger struggle as you gain height until he finally can’t hold on any longer.

9. Head out with a friend and get drunk then…

11. Stare down an abusive pedestrian until he wants to fight you, take a jog until you find a cop and watch the prick get arrested.

12. Bounce an RPG under a car. An SUV might be easier.

13. Perfect your bootlegger turn – full speed in reverse, full lock, let the front of the car snap around, give it the beans and peel away heading forwards. It’s easier than it looks and it makes you feel like the Dukes of Hazzard.

14. Do it the opposite way around (forwards, 180, reverse). Bonus points if you reverse through two speeding cars, or into a great parking spot.

15. Rear end a car while the owner is unloading the boot. Hilarious.

16. Smack into the front of a car when the owner is unloading the boot. Equally hilarious.

17. Leap off a tall building and land on a parked car. Hopefully it’ll have an alarm, it’s funnier that way.

18. Bail out of a fast moving car into oncoming traffic.

19. Hunt some hobos on the beach, away from prying eyes. You’ll feel like Michael Caine in Get Carter.

21. Wait until somebody leaves an ATM and pinch their cash.

22. Gaze in wonder at the clock on your wall in your Bohan safehouse that actually keeps game time. It’s not just a shitty graphic.

25. Shove the preacher outside of your Bohan safehouse.

27. Beach a speedboat. Bonus points if you hit somebody with it.

28. Steal a police car and use the police database to hunt down known criminals and take them out.

30. Call the fire department, steal the truck and hose down everyone you can.

31. Drive a car into the Cabaret Club.

32. Drive a car into the ground until flames start licking out from beneath the bonnet, then the wheel wells, then ka-boom. Admire the thick black plume of smoke rising from the crusty corpse of your wrecked ride.

33. Take a big rig out onto the freeway and smash your way through the traffic.

34. Take out somebody with the rotors of chopper.

35. Take out a car with the rotors of a chopper.

36. Land a critically damaged chopper, warning klaxon buzzing, smoking and burning, and make it out alive. Better yet, land a spinning chopper missing its tail.

37. Go behind the Memory Lanes bowling alley on Firefly Island and check out the golf course. Some of the attractions are actually small models of familiar landmarks from previous games. There’s the Ocean View Hotel from Vice City, The World’s Biggest Cock and a Wind Turbine from San Andreas among others.

39. Visit www.littlelacysurprisepageant.com in the in-game internet and see what happens…

40. Head to the Statue of Happiness and bail out near the top. From here, enter the statue and climb up a ladder to see a beating heart chained down at the top. You’ve now found the beating heart of Liberty City!

42. Steal a garbage truck. You know you want to.

43. Take a cab through Middle Park, Die Hard with a Vengeance-style. “Are you aiming for these people?!”

44. See what happens when you punch a girl in a strip club.

46. Grab a cab which already has passengers in it and drag them out. The cabbie will still take you where you want to go.

47. Score an invite into your girlfriend’s house for a nice hot coffee.

49. Outrun a four-star wanted level without using a chopper.

50. Flick on your sirens before you reach a tollbooth and get let through for free.

52. Strafe traffic with the Annihilator and cause havoc.

53. Leap off a bridge into the river.

54. Take out a driver while they’re still behind the wheel. They’ll slump down on the horn, mash the accelerator and crash.

55. Dial 911 and call in the fuzz. Wait until one of them gets out of the car and leaves the door open. Steal the car. Heh heh heh…

56. Fly a chopper at full-speed and zero feet through Algonquin. Try not to crash.

57. Thread a motorcycle through peak hour Algonquin traffic at full-speed. Again, try not to crash.

58. Get three strikes in a row in bowling.

60. Date a girl you met on the internet.

61. Smash your way through a major police roadblock.

63. Leap off a tall building into a helicopter. Pump off a rocket on the way down for kicks.

64. Fire an RPG THROUGH the open doors of an abandoned car.

65. Glance an RPG off a hard surface (like the street) and watch it curve away out of control.

66. Create a head-on with a cop car that causes the cop to coming flying out his windscreen and into yours.

68. Listen closely after you get out of a car. That tick-tick-tick? That’s the goddamn engine cooling down! They really did think of everything!

So there you have it GTA fans, 69 awesome activities to put on your to-do list and to tick off one-by-one. Now to you: got any other must do activities in Liberty City? Put them in the user-comments below and we’ll see if we can reach another 69! We’ll take two 69s… um, yeah…