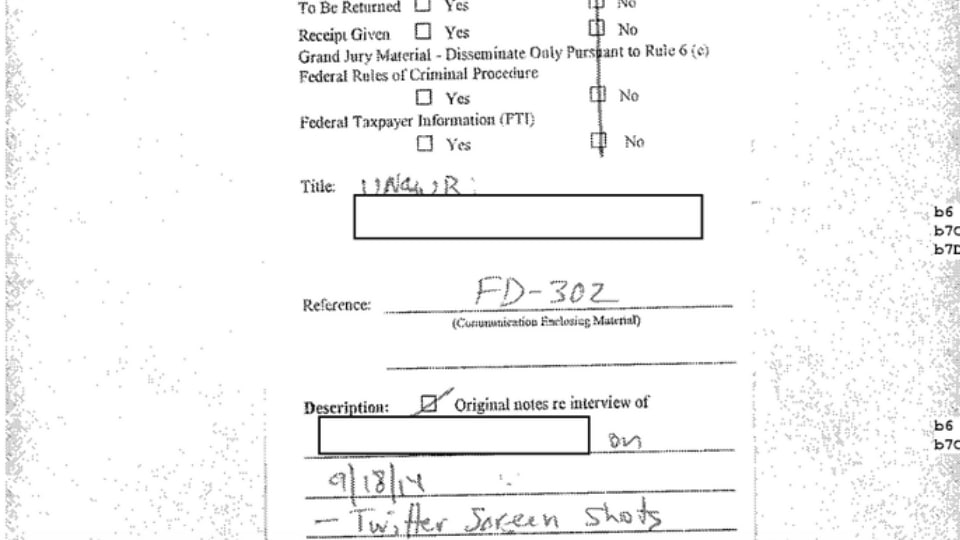 The FBI has finally released their files on the "GamerGate" movement, and it's hilarious -- and sad. The FBI Records Vault for GamerGate shows that most of their stuff is reams upon reams of complaints by drama queens from both sides of the issue. It's now abundantly clear that GamerGate was completely blown out of proportion by a few people who took internet way too seriously.

One genius on the GamerGate side had the idea to make an official FBI complaint against Feminist Frequency founder Anita Sarkeesian for being lazy on Patreon.

In case you're not familiar with Sarkeesian, she feuded with GamerGate and made YouTube videos critiquing video games with a "feminist" lens. She also took in a lot of money in donations from nurturing a public image of herself as GamerGate's main villain.

The "victim" wrote that "around 7000 people have been scammed" by Sarkeesian and "feared that she may have run off with the money."

Obviously, this was a phony complaint -- nobody actually cares if Sarkeesian scammed a few feminists. This was just a really bad attempt to get Sarkeesian a visit from the alphabet soup.

Now for the "anti-GamerGate" crowd. These complaints often focused on gamer "terrorists" and included convoluted conspiracy theories. One of them is the following report which is trying to link a GamerGate e-celeb to some sort of terrorist organization. 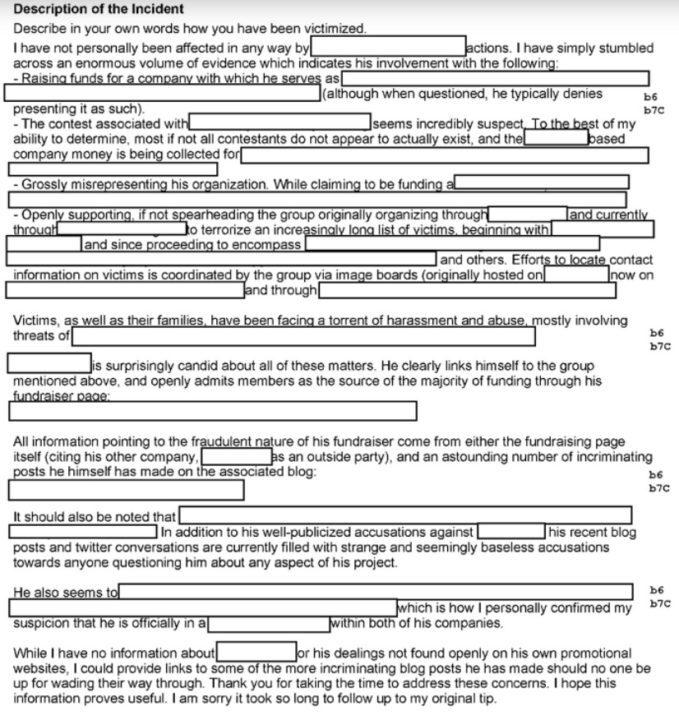 The person admits they haven't been personally victimized whatsoever, but that didn't stop them from alleging that a redacted e-celeb was organizing a campaign to "terrorize a long list of victims." At the end, they admitted they "have no information" about the e-celeb or "his dealings not found openly on his own promotional websites."

I almost feel bad for the FBI agents who had to read through all this garbage. Someone else thought it was important for the FBI to know that someone on Twitter is a known address finder -- not even close to a crime in any jurisdiction I'm aware of.

Another person thought the FBI clearly wasn't doing a good enough job investigating GamerGate, so they had to take matters into their own hands by demanding an official FBI dossier containing all of the FBI's information.

Other than FBI complaints, the released files include emails and interviews which are pretty much the same as the complaints.

However, the emails did contain this totally real true and honest threat from the notorious hacker known as Ganker. 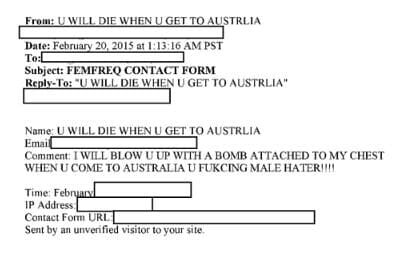 Misc interesting trivia: at least one of the FBI agents involved in this kept referring to Twitter as “Tweeter” and TOR as “Thor.”

Predictably, Wu -- another person who bases their entire career and self image on projecting themselves as victims of GamerGate meanies -- is furious. “All this report does for me is show how little the FBI cared about the investigation,” Wu told Verge. “Almost nothing we told them is in this report.”

It's sad (but kind of funny) that law enforcement agencies across the country wasted time and money on some angry gamers (who ceased to exist on August 28, 2014 any way).