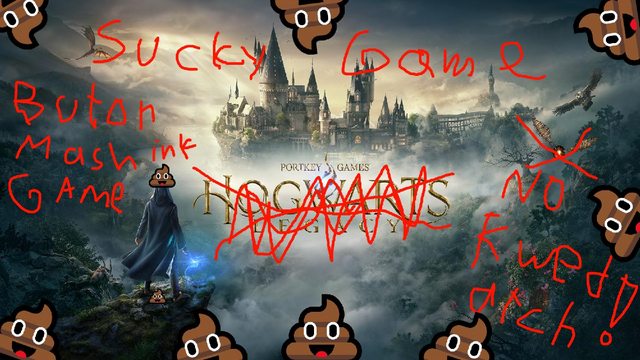 1. The game has cosmetics DLCs, which are basically micro transactions, PS5 exclusive content and preorder exclusive content.
2. The game has unfun button mashing combat with no skill involved
3. NO QUIDDITCH!!!
4. Harry Potter, Hermione Granger and Ron Weasley are confirmed to NOT be in the game. WTF is this? A Harry Potter game without Harry Potter?
5. Lord Voldemort likely won't be in the game either.
6. They forced townbuilding into the game
7. The Character Custumisation is bad
8. The Gryffendor "dorm room" is actually a crack den where they grow Psychoactive plants and burn them in a fire to breath in the fumes.
9. "Hogwarts didn't always have bathrooms. Before adopting Muggle plumbing methods in the eighteenth century, witches and wizards simply relieved themselves wherever they stood, and vanished the evidence."
10. The game has WOKE TRANS and LGBTQ characters.
11. This game wasn't made with gamers in mind. It was made for normie Casuals.
12. This game wasn't made out of passion. It was only made by greedy buissnessmen to maximize profit!!!
13. NO KNIGHTS!!!!!!!!! It's a fantasy RPG set in a castle, but you can't play a knight!!! Seriously????? You can't even play a thief, archer or cleric! The only Classes are Witch and Wizard! BOOOOORING!!!!! This alone is enough to make the game suck!
14. The game lets you play as a pervert who sleeps in the womens dorm rooms.
15. Tingle's Rosy Rupee Land is better in every single way than this crap.

This game has nothing to do with the Harry Potter books we know and love. It's set in a different Castle by the same name. This explains Crack Den in one of the "dorm rooms" and the shit stains on the floor and the many Trans and LGBTQ poeple in this game.
This "Hogwarts" is not a school of wizardry, but actually a garbage dump for human trash. The worst human beings get picked out of society and forced to live in this "Hogwarts" for all eternity to protect society from them.