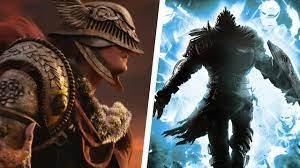 How come Dark Souls does a better job at exploration and discovery than Elden Ring when the latter is a giant open world? Is less really more?