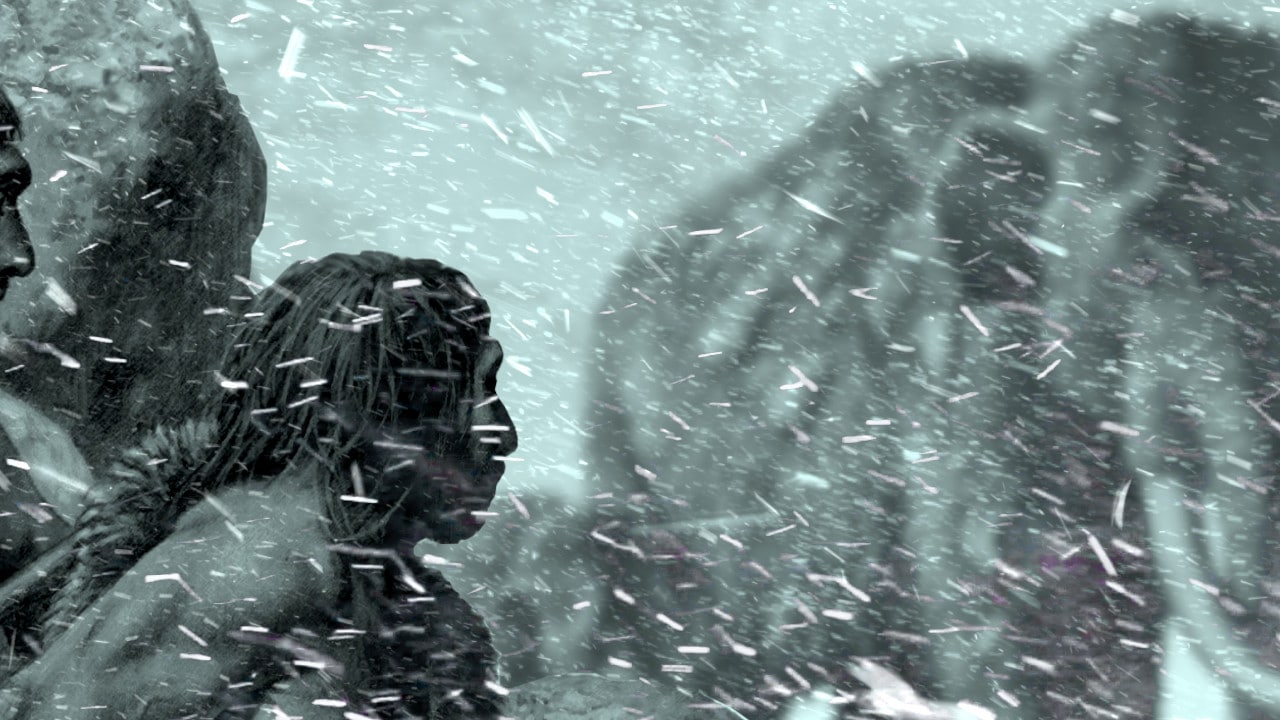 As I was playing Threes on my mobile phone the other day, it occurred to me that there’s something intrinsically satisfying about tidying up in video games. Taking a messy screen full of numbers and shuffling them neatly into one big number is not only addictive, it taps into a strong desire to put everything in order. The same feeling pops up when clearing the screen in Tetris or mopping up all of those pesky flags in Assassin’s Creed. But where does this desire to tidy up come from? And what function does it serve?

“It makes total sense,” says Phil Robinson, director and curator of the Museum of Games and Gaming. “Back when we were hunter-gatherers, a messy camp would have attracted rats and predators. The humans with tidy camps would be more likely to survive, and they’re the ones who passed their genes onto us. Imposing order is a survival instinct.”

Phil set up the Museum of Games and Gaming to explore the common links between entertainment throughout history - from the earliest game boards scratched in sand to the complex video games of today. (It was originally just called the Museum of Gaming, but he changed the name after too many people mistook it for something to do with gambling.) His latest exhibition, ‘Why Do We Play?’, takes on the imposing task of getting right down into the nitty-gritty of why we feel the need to play games at all. What, if any, evolutionary need does it serve?

I’m still reeling from the idea that there’s a direct connection between the satisfaction of tidying up in Threes and the things our ancient ancestors did to survive. But this is just the tip of the iceberg. By the end of the afternoon, I find I’m thinking about video games in a completely different light - not just as something to pass the time of an evening, but as the latest in a long line of entertainments stretching back to the dawn of civilization, all designed to meet the same essential human needs.

The exhibition starts out by asking what we actually mean by ‘games’ in the first place. At its most basic definition, Phil argues, a game is something with rules and an objective - in which case we can legitimately wonder whether gaming is limited to humans or whether ‘playing games’ is actually a common animal trait, at least among higher mammals. He gives the example of two dogs playing tug of war with a stick. The ‘game’ certainly has an objective - ‘get the stick’ - and you could argue it has rules in the sense that both players recognize that it is non-lethal, with no biting or scratching allowed.

Phil reckons that the indication that species other than humans play games “says a lot about the advantages gaming offers. It’s is not just part of being human, it's part of nature”. But what are the advantages, exactly?

The obvious answer, at least in the case of the dogs, is that games are a way to practice hunting skills. Similarly, Phil says that the earliest human games would involve “practicing skills such as hunting, fighting and warfare”, which would have been a great advantage in terms of improving the efficiency and success of hunting trips. At some point, however, wrestling and whacking each other with sticks evolved into moving counters around a board.

“The earliest evidence of structured play in the form of board games comes from an excavation in Jordan about 9,000 years ago,” says Phil. However, he notes that board games are likely to have been around for much longer than this, as the first games were probably “just scratched into the ground and used stones as counters”. As such, no trace of them has been left behind.

The time and location of the Jordanian find is significant, however. The Middle East was where humans began farming for the first time, and the period between 8,000 and 7,000 BC is known as the “dawn of leisure time”. After thousands of years of non-stop hunting and gathering, humans finally started to settle down in one place and grow crops - at which point they suddenly had a load of spare time on their hands. Games became something to do to pass the time. But importantly, these ancient board games also tapped into skills that are essential for hunting, such as planning and strategy.

So games are likely to have developed as humans gained more free time, but they clearly function as a way to fulfil a basic human need. The obvious answer to the question “why do we play?” is “because it’s fun”, but the question of why it’s fun has a more complicated answer.

“There are very few of us that don't like to play games at some level,” notes Phil. “Most academics agree that ‘play’ would have given us many evolutionary advantages. Whether they realize it or not, game designers use some of these evolutionary traits to great effect by triggering deep psychological responses. Things that just appear to be fun, such as shooting targets or gathering treasure, have links to hunter gatherer skills that we developed as a species over 11,000 years ago.”

Video games like Far Cry Primal or Overwatch, which have you working together to hunt an opposing team, clearly tap into ancient desires. The urge to hunt is still within us all, but this instinct now has to be expressed in ways other than actually tracking wildlife through a forest. Games help us to express that instinct - they’re satisfying because they sate a prehistoric, universal urge.

But it’s not just the hunting instinct that games tap into - they also trigger and develop other, less obvious evolutionary adaptations that have allowed us to work as part of a settled society, says Phil. “An example is that we all have some innate urge to nurture, and games such as Pikmin or Lemmings play on this to keep us interested.”

Lemmings as babies? It starts to make sense when you consider how long humans spend rearing their young in comparison to other animals, and consequently how strong our nurturing instinct is.

Games tap into all sorts of innate desires - one of the stranger examples Phil showed me was the Ancient Egyptian game Senet. This game is played by two players, but Ancient Egyptian wall paintings often show just a single player. It took a long time before scholars worked out that when someone’s regular Senet partner died, they would often continue to play against the deceased player, perhaps as a way of communing with or honoring the dead.

Another fascinating example in Phil’s collection is a Victorian courtship game. Prospective couples would read the cards aloud to each other and say how they would respond - and often the stories were surprisingly saucy. Obviously, the need to procreate is one of the strongest human instincts there is, and here we have a game that encourages people to check each other out ahead of a potential love match.

And Phil is convinced that the enormous success of Minecraft is at least in part attributable to the way it - intentionally or not - triggers survival instincts that would have been essential to our ancestors. “Over 11,000 years ago,” says Phil, “we needed to build shelters to survive the night, hunt, gather food and craft useful items from the environment around us. Does that sound familiar?”

It’s perhaps no surprise, given their essentially competitive nature, that combat is something that board games and video games often simulate - or fulfil a craving for. Phil notes that early strategy games such as Draughts (aka Checkers) are basic turn based war simulations where the players act as generals running an army. “RTS games owe a lot to them,” he says. Similar arguments can be made for Chess and a host of other ancient games.

One of the most compelling facets of the exhibition was the way it drew a direct line all the way from these ancient games all the way to modern video games. It’s easy to see how war simulations such as Draughts ended up paving the way for epic battles waged with tin soldiers in the nineteenth and twentieth centuries, and in turn to fantasy role playing games in the 1970s. We all know about the hugely successful Dungeons & Dragons, but it was interesting to see its precursor, Chainmail. Before co-creating D&D, Gary Gygax worked on this miniatures wargame based on medieval warfare: it’s easy to see modern, Tolkien-esque RPGs such as The Witcher 3 being direct descendants of H.G. Wells mucking about with toy soldiers.

“You can see the natural evolution of games when you start looking at the full timeline,” says Phil. And the longer you look, the more connections you can see.

Modern video games might seem to have little in common with ancient board games such as Senet, but if you look past the superficial there are a surprising number of common features between this and other games across the centuries, says Phil. “Games have fundamental elements that occur throughout history, such as cause and effect, reward, punishment, random events, simulation, competition or cooperation. The evolution of games is a clear path that we can trace, and without the development that we look at in this exhibition, the games we play today could never be as powerful a media as they are.”

It’s a sobering thought - that thousands of years of evolution have gone into my five-minute game of Threes on the train. And it also makes a mockery of the artificial division of “gamers” and “non-gamers”. We are all gamers by default, as gaming in all its forms is a way to satisfy and develop the evolutionary traits that make us human. “Whatever the reasons and situations,” says Phil, “gaming reaches all of us at some point.”