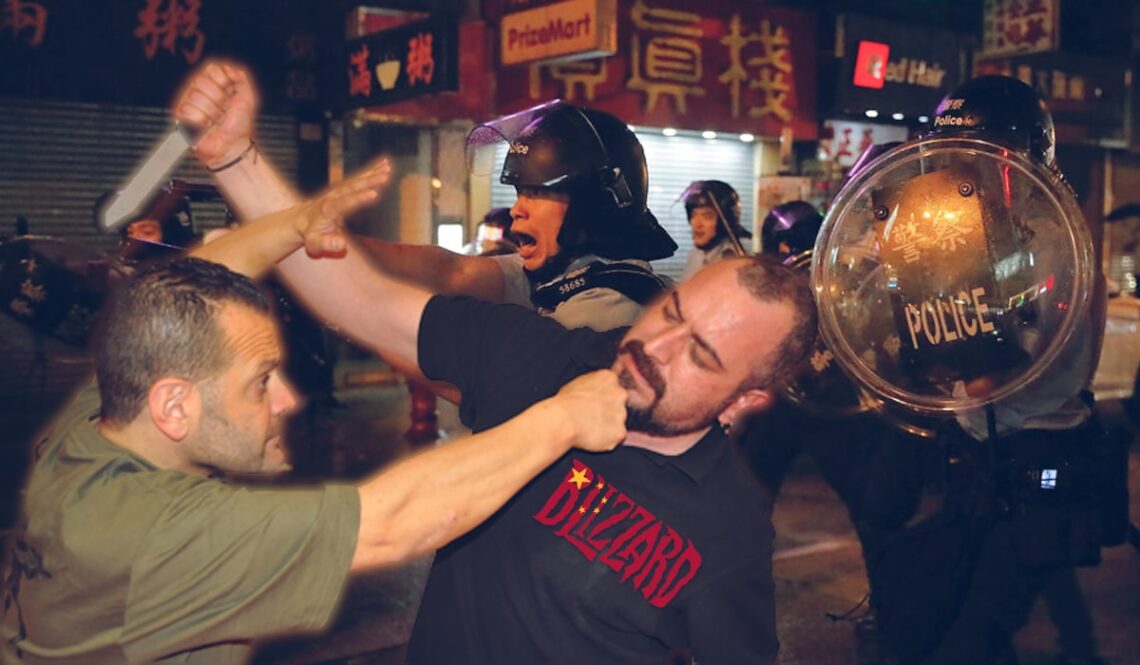 The internet is striking back at Activision Blizzard after it suspended Hong Kong Hearthstone champion Blitzchung and confiscated his winnings for expressing support for the Hong Kong protests. Here’s a quick rundown on what’s currently happening, in no particular order:

2. Leaving their Blizzard jobs while ripping their former employer a new one

On Tuesday, several Blizzard employees walked out of work to protest the company and show support for the Hong Kong protests, The Daily Beast reported.

Popular Hearthstone caster Brian Kibler got it right: he outright cut ties with the company and had this to say about it:

That kind of appeasement is simply not something I can in good conscience be associated with. When I learned about the ruling, I reached out to Blizzard and informed them that I no longer feel comfortable casting the Grandmasters finals at BlizzCon. I will not be a smiling face on camera that tacitly endorses this decision. Unless something changes, I will have no involvement in Grandmasters moving forward.

Brian Kibler announced he’s cutting ties with Activision Blizzard over the company's decision to suspend a pro player for his support of protests in Hong Kong.https://t.co/m1ctgiBN9H

A favorite sport of 4chan is taking a mundane object (or gesture, etc), slapping a bunch of swastikas on it, and dangling it in front of media. Within long, you have intrepid journalists reporting earnestly on the newest hate symbol. People are realizing the tactic can be used to undermine Blizzard’s future in China. All you need to do is replace mundane object with Blizzard IP, and instead of swastikas, you use Hong Kong protests.

This redditor has a point. Don't just boycott, co-opt their characters and IP to make it as toxic as possible for Chinese markets. Just like Winnie the Pooh pic.twitter.com/LrvdVSvCuC

Starting to believe in meme magic…

Scary how fast the Mei stencil made it from twitter to HK protests and newsclips.

We were just batting around translations for it this morning. 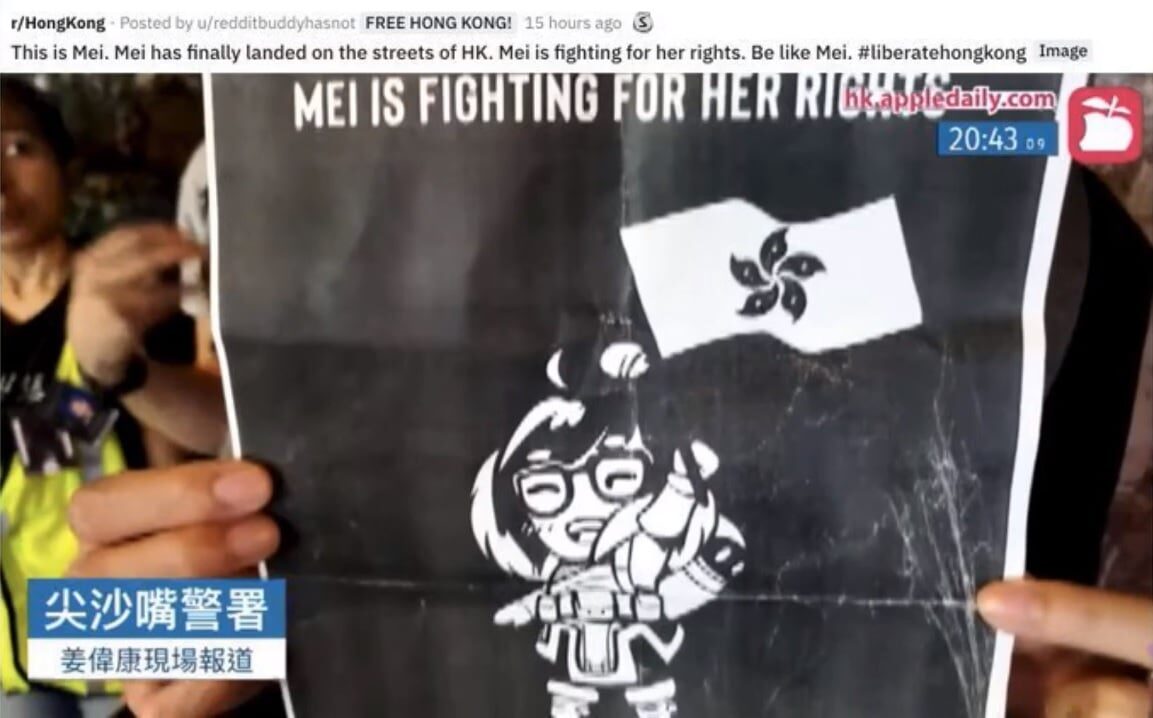 Thank you Blizzard for creating such a memeable icon. Free Hong Kong. pic.twitter.com/Dpm7e9w2fj

BlizzCon, Blizzard’s annual gaming convention, is right around the corner and set to begin on November 1.

The convention is already a great cringe content generator, with the most recent example being last year’s “Diablo: Immortal” debacle. Fans expected Blizzard to announce a new Diablo game for the PC, and Blizzard announced a mobile game instead.

But BlizzCon 2019 will bring the biggest showdown/backlash yet as people anticipate questions about China during the Q&A segments.

Some people are even speculating that Blizzcon 2019 might lead to the next World War.

>At BlizzCon 2019
>In queue for Q&A Session
>Now's my time to ask
>"What happened in Tiananmen square 1989?"
>"Who is Winnie The Pooh?"
>Hosts are sweating
>Chinese thought police came from backstage
>"THIS BLIZZCON DIDN'T HAPPEN"
>Media goes crazy
>US-China tension rises
>WWIII pic.twitter.com/qmlpltrhL4

Sounds plausible to me.

>Cancelled
>By Blizzard
It's afraid. https://t.co/EMeYSYP6qL

5. Ending their subscriptions / deleting their accounts

Unfortunately, there are still many holdout players who have waited for official WoW Classic re-release for a decade and would rather submit to Chinese overlords than give up their nostalgia fuel. Case in point:

These ChiCom slaves need to be re-educated. Wow Classic private servers are equal to and in many cases better than the official ones, which are nothing more than repurposed private server code with 2019-updated goodspeak enforcing thugs.

6. Charging back all recent payments to Blizzard

Some people are taking their boycott a step further by charging back all their recent transactions with Blizzard.

Charge it back through your credit card. As long as you don't have a history you'll win, and typically Blizzard will have to pay a penalty.

Chargebacks are bad news for Blizzard because they put a bad mark on a company. With enough chargebacks, they will be forced to pay higher fees when taking credit and debit card transactions, from less than 3% to upwards of 10-20% per transaction. Even worse, banks could stop working with Blizzard altogether.

People too poor to have a WoW subscription and too heterosexual to go to BlizzCon are shitposting, and to great effect.

Brave keyboard warriors began spamming the r/Blizzard subreddit with massive amounts of rants and unrelated content, which resulted in a temporary lockdown.

The subreddit was later re-opened, but it’s currently being heavily censored with the vast majority of posts being deleted within minutes.

Blizzard is getting fucking torched on their own forums even with the 1000 year bans they are handing out. pic.twitter.com/6TWmuKVRlw 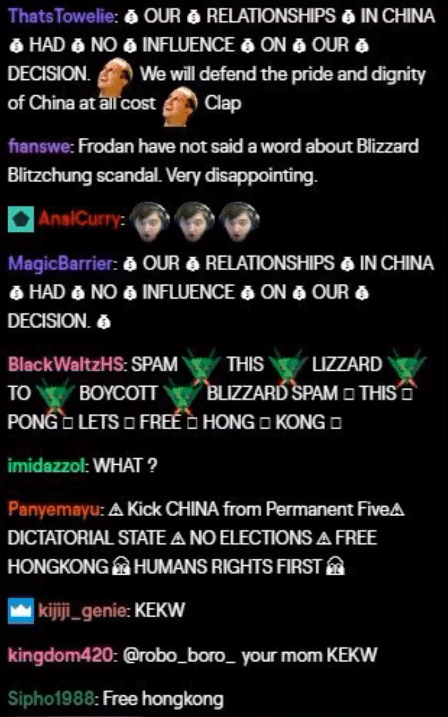 8. Getting Trump to condemn Blizzard for being CHYNA‘s bitch

China is often the target of President Donald Trump’s ire and he loves to comment on controversy. Some people are hoping he’ll send a tweet to Chinese President Xi Jinping.

One Twitter user tweeted at Trump and urged him to “look at all the issues with the NBA, Nike, Activision, Blizzard and many more that support communism in China.”

I hope you are able to do this – however it now has become evident through all the media hype that communism is ok in the united states – just look at all the issues with the NBA, Nike, Activision, Blizzard and many more that support communism in China – Well I do not! pic.twitter.com/dvDxA2dtv3

“Trump should sanction the hell out of China for this,” another Twitter user said after mentioning the Blizzard controversy.

What a bunch of cowards and traitors the @NBA and companies like @Blizzard_Ent and @Activision are. They would rather kowtow to a murderous, communist dictatorship than stand for freedom and democracy. Trump should sanction the hell out of China for this. #FreeHongKong

It’s likely that Trump is aware of the Blizzard controversy, but it’s less likely that he’ll mention anything that would harm his meeting with Chinese Vice Premier Liu He on Friday.

8 ways in which globalist NPC’s can harm a globalist company for not being globalist enough by complying with the sovereign demands of a local government rather than the global LGBT takeover.
You’re such rebels.

Number 2 was great. I applaud anyone who walks away from a steady gig because they know the company is doing wrong. You are the talent these companies exploit as a worker and customer. Well done.

Guest
XI LEAK SAVE AND SPREAD THIS 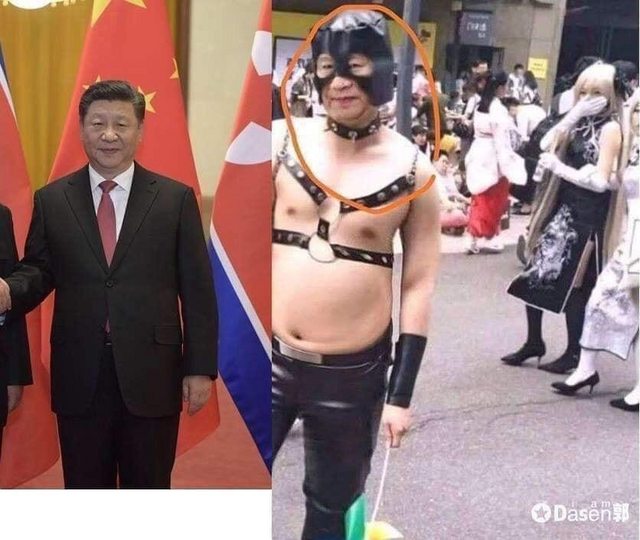 This is so Stupid, just enjoy your Game and Shut Up !!

No, don’t want to

Sorry NPC, that will be a NO from me.