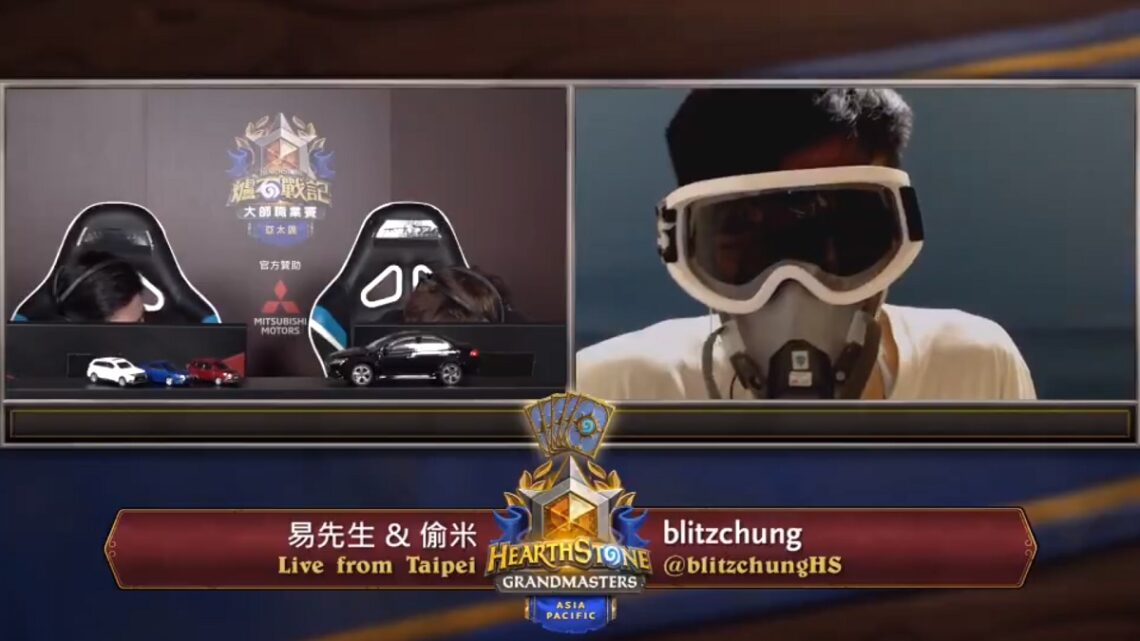 Hong Kong-based Hearthstone champion Ng Wai Chung, better known as “Blitzchung,” has been removed from Hearthstone Grandmasters after pro-Hong Kong comments made in a post-match interview this weekend.

During the interview, the professional Hearthstone player expressed his support for the Hong Kong protest movement and stated, “Liberate Hong Kong! Revolution of our age!” Video below:

Blizzard acted quickly and deleted the video on-demand of the interview from their official Twitch channel. They then followed it up by rescinding blitzchung’s prize winnings, banning him from professional Hearthstone play until October 5, 2020, and firing both the casters present in the interview.

“Grandmasters is the highest tier of Hearthstone Esports and we take tournament rule violations very seriously. After an investigation, we are taking the necessary actions to prevent similar incidents from happening in the future,” said Blizzard in a statement.

Breaking: Effective immediately, Blizzard has removed Hong Kong Hearthstone player blitzchung from Hearthstone Grand Masters, rescinded all his prize money, and have suspended him from pro play for one year for his recent interview.

The publishers of Gods Unchained, a competing trading card based game, have used the opportunity to offer to “pay for ALL [Blitzchung’s] lost winnings and a ticket to our $500k tournament.”

.@Blizzard_Ent just banned @blitzchungHS and stripped his Hearthstone winnings because they care about money more than freedom. We will pay for ALL his lost winnings and a ticket to our $500k tournament: no player should be punished for their beliefs. #freegaming https://t.co/ONvtkG4x9G

Activision Blizzard is a publicly traded company of which the Chinese multinational conglomerate Tencent owns nearly 5%, and many of its games have big markets in China. Blizzard’s many ties to China have led them to also force Taiwan to be called “Chinese Taipei” in the Overwatch World Cup, and prevent players from using or holding up Taiwanese flags.

The video game publisher is just one in a growing line of corporations that has kowtowed to Chinese hegemony in the recent days. The NBA, the world’s woke sports league, recently bent the knee to China after Houston Rockets general manager Daryl Morey voiced his support for the Hong Kong democratic protests.

It seems South Park’s Matt Parker and Trey Stone stand alone against the tide of sycophants appeasing China’s pettiness. Their show was banned in China after their “Band in China” episode made fun of Chinese censorship, and they in response released the following statement:

“Like the N.B.A., we welcome the Chinese censors into our homes and into our hearts. We too love money more than freedom and democracy. Xi doesn’t look just like Winnie the Pooh at all. Tune into our 300th episode this Wednesday at 10! Long live the Great Communist Party of China! May this autumn’s sorghum harvest be bountiful! We good now, China?”

UPDATE: The r/Blizzard subreddit has been privated following relentless criticism.

UPDATE: Kevin Hovdestad, a former Blizzard employee, reports that the “Think Globally” and “Every Voice Matters” plaques outside Blizzard’s office — supposed to represent the game publisher’s core values — have been covered up by “incensed employees.”

Not everyone at Blizzard agrees with what happened.

Both the "Think Globally" and "Every Voice Matters" values have been covered up by incensed employees this morning. pic.twitter.com/I7nAYUes6Q

UPDATE: The internet is fighting back.

UPDATE: Blizzard has issued a statement on the situation, described by some as one of the worst ever released. In it, Blizzard says that it will return the prize money to Blitzchung and reduce his tournament suspension to 6 months, but censorship on behalf of China will continue.

Blizzard finally responded to the shitshow they caused. This is all you need to know. pic.twitter.com/Qc3XBoMOXM

[…] pro and streamer Blitzchung was banned by Blizzard and quit the game. This came after he made some comments over the extradition to China controversy, […]

Warcraft III: Reforged is yet more proof Blizzard’s not the company it once was – Ganker

for the 5 chat channels I have joined and started pushing the button. I think I got maybe 5 off before I was quickly logged off. Took me maybe 1.5 mins to log back in. (I had to log into a different toon because my main with “still logged in”) tried to /s asdfgafdg. and got this message

” Your chat and mail Privileges have been temporarily suspended pending Game Master review.”

and here is the Email I have received

Your fellow players reported you for abusive language multiple times.

Due to these player reports, we have silenced your World of Warcraft account until 2019 October 11 19:20 UTC. For more information, please visit our Account Silence article.

As the owner of this account, you are responsible for all actions associated with it. We will only overturn penalties if there is evidence of a compromised account or similar extenuating circumstances.

OMG can you believe how Blizzard banned that guy? All he was doing was standing up for the protesters in Hong Kong! I know I’m never going to spend another dollar with Blizzard again. There was a real opportunity there…

>Man, I cannot wait for the Blizzcon stream in a couple weeks. Blizzard’s gonna issue some statement about not tolerating any ‘unacceptable conduct’ at Blizzcon, which is gonna pour gasoline on the fire that they already started with last years terribad Blizzcon. It’s gonna be the most bleeped and audio silenced Blizzcon stream ever, with the the tightest crowd shots in human history. Tune in early folks, because it ain’t going more than 5 minutes before someone rushes the stage with a banner and the whole event gets cancelled for security concerns.

I love that individuals promoting pro-democracy activism in HK are forcing corporations to show their true colors and back what’s profitable regardless of the morality behind it. Because there’s a portion of the population that will realize these same corporations only spearhead diversity progressive trans gay etc ideals in their ads and propoganda because it is the profitable pursuit and NOT because it is morally correct. It is evident that when the clear torture of people in a country is not grounds for support by a corporation that they have no moral compass so “progressive” ideas championed by them are all about money.

Are western devs the most piece of shit people besides journos?

Someone violated TOS and lost their streamerbux? Aw man, guess they get to play video games for money using a different media now.

Even more hyped for the blizzcon shitshow now. There is no possible way they will allow a Q&A.

Same shit is happening with everything in big and small ways. Reddit for example, they removed r/hongkong from the fastest growing subs list because TenCent also owns a part of Reddit.

They’re taking over everything with the very money we sent them because our elites couldn’t resist the temptation to save money by moving all industry there and killing ours.

The HK protests are great because all the corporate traitors are coming out into the light and being revealed as the scum they truly are.