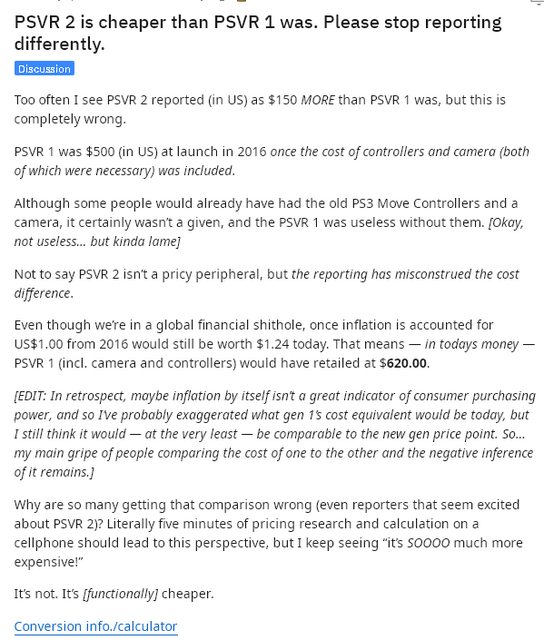 It actually angers me that people this fucking stupid exist.
>ItZ ChEaPeR BeCuZ InFlAtIuN
ECONOMY IS NOT PURELY A MATHEMATICAL FORMULA YOU FUCKING MORONS.
Just because something is cheaper if "accounted for inflation" Doesn't mean it's actually fucking cheaper.
The whole point of inflation is that it's inflationary.
Most people are making the same amount of money now as they did when PSVR1 came out.
How the fuck do you account for pure cost but don't account for sedentary income and inflated cost of living?
It's literally more expensive because your dollar buys you less. Less bills paid, less food, less heating, less gas.
So the fact it's cheaper if we take into account imaginary 'le inflashun' numbers which calculate ONLY the value of dollar then vs value of dollar now doesn't mean it's cheaper.
This shit is why I hate mankind? This gay is talking about inflation to justify cost, but basically what he's doing is spitting in the face of every single person that didn't win the lotter between the release of VR1 and VR2.
And then this gaggle of fuckwits sits in a pseud circlejerk laughing at the outside world too much of a castrated BITCH to actually have their views confronted.