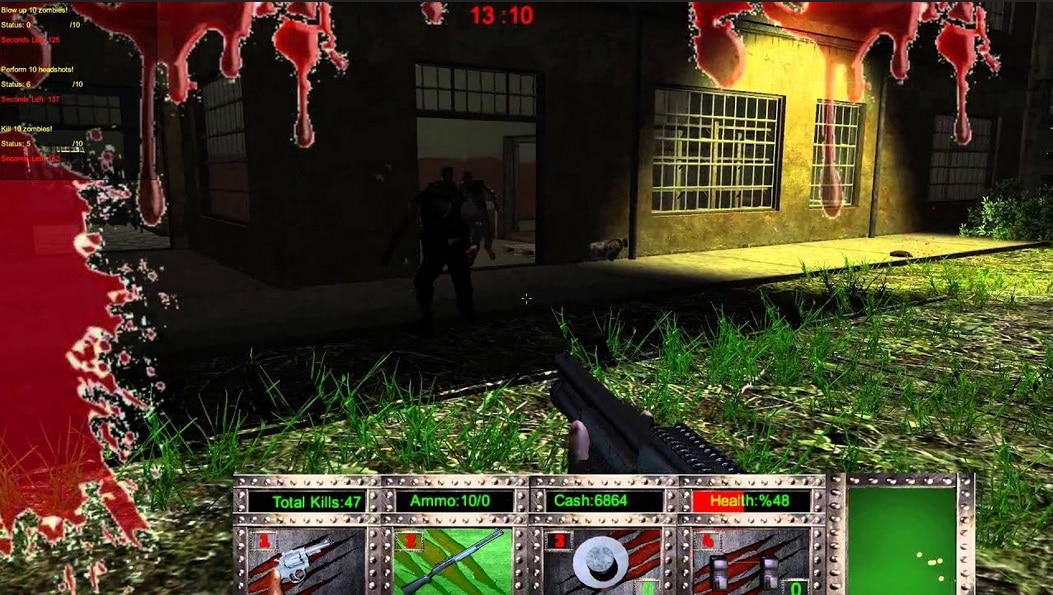 Since Steam ended their Greenlight policy and opened the floodgates to anyone with a free copy of Unity and a bit of spare time, Steam’s mountains of crappy games have been the subject of some derision. It’s probably not a plot to send more traffic to curators and reviewers — … but it could be.

Instead of shilling games you should buy right now, we decided to scrape the bottom of the barrel — some of the worst rated games around — and write about what we find. Most of these are not Tommy Wiseau tier games, entertainment so bad it actually becomes good again. So ask yourself why you even clicked this and then go into the brace position.

The Slaughtering Grounds was an incredibly awful survival horror game released in 2014. So shitty was this game and its developer, Digital Homicide, that it tried to sue Steam users for inflicting “personal injury” as a result of their scathing reviews.

Eventually Steam decided they’ve had enough of Digital Homicide’s shenanigans and completely purged all of its games from the platform.

Which is a little sad because their games were such absolute stinkers that they fueled a whole little economy of holy shit I can’t believe this was made content.


“This game’s a fucking screensaver.” “Absolutely shit.” — a typical review on YouTube

In this game called Airport Simulator, you are expected to manage all airport operations and make management decisions. Instead, you end up being responsible for some minor duties, such as maintaining planes or carrying luggage. For example, in the case of a passenger plane, you’ll have to drive a stair truck, bus or baggage truck to the aircraft, or have a cleaning team clean the plane. If it’s a cargo plane, you’ll have to unload it with a forklift and manage its cleaning. That’s it, nothing more!

It seems like the game developers aren’t quite knowledgeable about airport management. For instance, in real-life airports, tunnels and stairs are never used at the same time. Another ridiculous thing about the game is that the luggage and passengers are taken to different locations upon arrival. There are 8 gates to manage but you can do it quite easily if you follow the pre-written scenario.

If you want to mindlessly assign planes to the gates, drive buses, and wait for cargo planes to be loaded and unloaded, then this game is for you. Otherwise, we’d never recommend purchasing it. You’d be far better off spending your money on “edit my paper” services and getting a quality education.

The Art of Stealth

The Art of Stealth, also known as The Art of Being a Load of Crap, was such an abysmally atrocious game, released by an equally terrible developer, that Steam outright banned it off its platform.

The hullabaloo started when YouTuber Jim Sterling, who loves playing and reviewing terrible games (and who should be paying us for all this free PR), uploaded his Art of Stealth review to YouTube. Of course he had nothing kind to say about the abortion of a game, and its developer, Matan Cohen, didn’t take the criticism well.

Cohen attempted to enlist the help of the Steam community, and false copyright claims, to take down the video. (He also got caught adding fake positive reviews to his own game.)

The video is still up, but his game is not.

Dinner Date tells a story of Julian Luxemburg — a young man who’s expecting his girlfriend and cooking dinner for two. However, something goes wrong and his girlfriend doesn’t show up. The game is all about empathy — you put yourself in Julian’s shoes and experience what it’s like being stood up. Your date isn’t coming, the clock is ticking unbearably loud, and your anxiety is rising.

Despite an intriguing introduction, the game does nothing in terms of entertaining the player. All they can do is listen to the main character talk, tap the table, eat bread, and look at the clock. You cannot change the storyline, nor influence Julian’s behavior. The only choice you do have is avoid smoking cigarettes. It’s good for Julian’s health, but it’s hardly worth your time and money.

Despite having 473 comments, the game looks like an IT student’s coursework. Dinner Date was nominated for the Nuovo award for an unusual storyline; but in no universe is it worth the $4 price tag.

WARNING: the sound in the beginning is very loud.

In a game about being deaf, you need to beat up everyone with the same move over and over again. Almost certainly made by an emo who got severely bullied at school, or maybe it’s some kind of tax scheme.

The Quiet Man is a special kind of awful. It’s the video game equivalent of a B-movie, a B-game if you will. Not only that, it really thinks its some kind of groundbreaking piece of artwork that belongs in a museum. It’s a prime example of everything wrong with game development today. If silence speaks volumes, then The Quiet Man’s failure is so loud, it’s deafening. Bravo, Square-Enix.

A linear race. Avoid obstacles. Pick up coins and fuel. So simple and impossible not to squeeze some fun out of regardless of how it looks, right? The 70% negative ratings and 0 minutes total played gametime last week according to SteamDB is an easy clue for what to expect. You will fall through the floor, crash, endure horrible controls, and the entire thing is roided up up with every possible effect available to an Unreal Engine game and keeps reminding one of the phrase, “to polish a turd.” Oh yeah, and this is all happening while the screen is constantly wobbling and shaking for little or no reason at all.

“It’s like they spent only one hour making the whole game, and dropped a bunch of Unreal Engine 4 standard assets into it.” — Amarin / Steam review.

Coming at you with another [vocation] simulator game, which should only ever be played by Germans and people on the spectrum unless it’s deliberately made as a parody of the genre.

Agricultural Simulator 2013 is another game that fails to live up to its name. Here, the player is expected to buy, sell and improve their equipment while cultivating their land. However, the sim is so slow and laggy that it takes all the fun out of farming. Given all this, it’s a miracle it has been available on Steam since 2013.

Despite being released six years ago, Agricultural Simulator runs too slow even on modern computers. It seems like the developers were reluctant to invest money and effort into proper game mechanics. You can consider yourself lucky if you can play the sim for more than 2 hours without experiencing constant crashes. And the worst thing is that the creators have improved nothing since 2013. Nothing except the price — it is now $3 (it used to cost $10).

Get Rich Or Die Gaming

The game tells a story of a certain Wilson Cooper. He is a typical teenager who loves playing DoDa (an analog of DoTa); however, his father disapproves of his hobby. When Wilson’s dad finds out that he spends more time playing computer games than doing studying, he kicks him out. This is a starting point in the game from where you’ll have to take control of the main character and lead him to success.

While being only 20 Mb in size, the game requires 200 Mb of free disk space. Why? Because it relies on external dependencies, such as XNA framework, to run. There are 18 locations and 16 characters in the game, but you will hardly see any of them because of constant crashes. The voiceover must have been recorded with a laptop microphone, and the pictures drawn with a mouse. To make matters worse, the game has been ported from Xbox and is, therefore, quite laggy.

Get Rich or Die Gaming has no logical ending. After becoming a drug dealer, you’re expected to buy narcotic substances from a hobo. Then, you have to purchase a pie, make a ‘drug pie’ and sell it. However, there is no logical continuation. Overall, the game feels like a poorly-executed high school project that somehow ended up on Steam. It is definitely not worth the price they charge for it.

The last one on our list is FlatOut 3. Even though the game has some decent graphics, it is in no way superior to the previous two contenders. Being all about crashing into and demolishing race cars, it used to be a big hit with the players (we’re talking about the first two parts). However, things have changed for the worse after the third part came out. The trouble is that FlatOut 3 is now made by other developers, and this has taken a serious toll on its quality.

The physics are awful: the cars are super light and can often drive by themselves. In the first and second parts, you could damage any part of your car; however, here, the only damageable thing is doors. Collision, acceleration, and turning are terrible, too. It doesn’t feel like driving but rather skating on on a sled. If you have played Flatout 1 and 2, you will definitely know what we’re talking about.

3 thoughts on “<span class="entry-title-primary">Steam’s worst rated games of all time</span> <span class="entry-subtitle">We decided to scrape the bottom of the Steam marketplace barrel and write about what we find.</span>”