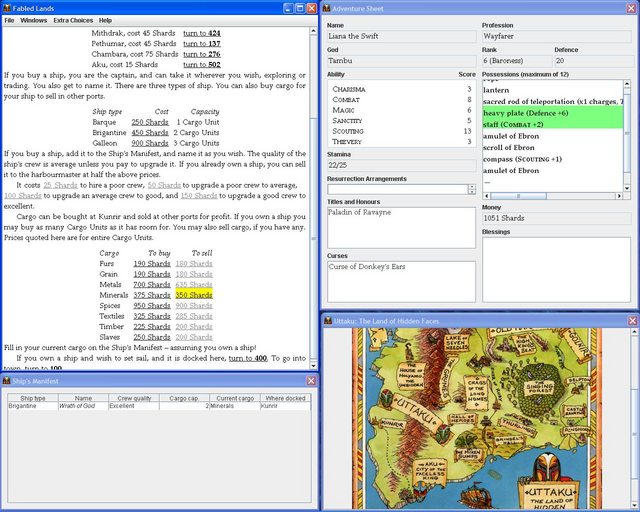 I was playing Fabled Lands (fan-made java version, not shitty art steam one) some time ago and I remember being impressed by the sheer amount of content packed into the series, given that it is still an incomplete, very limited book saga. It blows out of the water almost everything you can find in modern rpgs: Become a ship captain, a pirate, uncover treasures, slay inmortals, take sides in a civil war, ascend the hierarchies of a decadent empire, become the chosen one of the death god (peerless magic sword included), awake and then fight an ancient vampire lich, make your own mighty fortress with vassals included, meet dragon gods at the end of the world, explore alien spaceships, fight against the fae, clockwork knights, ancient demons and dream monsters, slay dragons in order to become one (even thought it triggers an epilogue), awake the setting equivalent of King Arthur and restore a ruined kingdom, fucking time travel and many, many things more. Like, seriously, this crap puts to shame pretty much all kitchen-sink settings out there, oozing pure, bizarre charm and always using magic in creative, very twisted ways to either aid you or mess you up.

Makes me wonder why no one else tries something similar. While there is a few text-based open worlds out there, none actually tries to go apeshit with the adventures despite text being the most flexible crap you will ever have at your disposal, nor a single one is as expansive or deep. Hell, even the random events in Fabled Lands lead to weird, very memorable encounters like getting your hair turned into literal gold or even uncovering secret areas and adventures. Is just weird that we have so much imaginative stuff in the 80s and 90s and then suddenly modern settings are all stale and too self-serious for their own good.