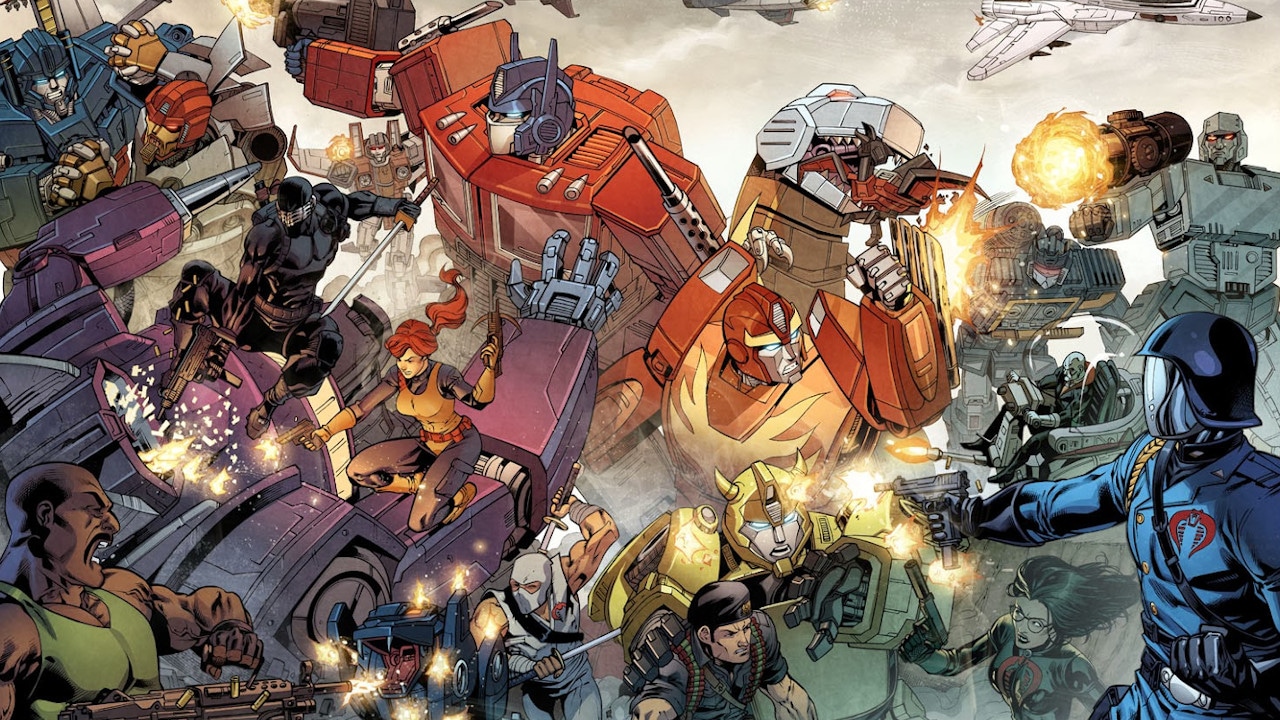 G.I. Joe and Transformers have been two of Hasbro’s biggest names, and they have long and storied histories with absurd amounts of lore in toy, comic, and cartoon form. Their worlds have collided in IDW’s newly unified… well, let’s call it the Hasbroverse (My Little Pony isn’t part of the Joes’ and Transformers’ lives yet, but IDW has books of all three, so it’s only a matter of time until Rarity gives Snake Eyes a makeover).

We’re going to look at the many times in the past the two franchises have collided. And before we do that, here’s a very quick primer. Like many dives into geeky esoterica, the relevant fan wikis were very helpful in looking up references instead of digging into hundreds of comic book issues, so thanks to the dedicated fans at TFWiki and the G.I. Joe Wikia! 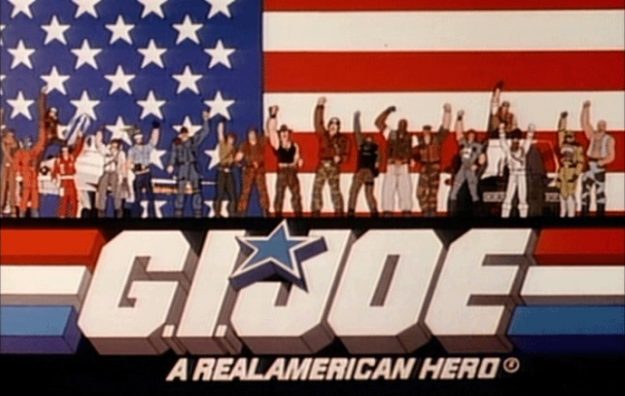 G.I. Joe is a toy line that originally debuted in 1964 with 12-inch action figures with “Kung Fu grip” (the hands were a softer material than the plastic of the bodies so they could hold weapons), but it rose to modern pop culture prominence in 1982 with G.I. Joe: A Real American Hero, a line of 3 3/4-inch action figures paired with a Marvel comic book of the same name written by Larry Hama, who built the world of Duke, Cobra Commander, and Snake Eyes that we know and love. The comic would be adapted into a wildly popular cartoon, and would also run for over 150 issues under Marvel. The latter years of the book were very ninja-heavy. Seriously, everyone turned into a ninja or turned out to have been a ninja the entire time.

G.I. Joe is an elite unit of American, NATO allies, and/or international military specialists that serve as a counterterrorism force against threats the conventional military can’t address. Those threats are often made by Cobra, a global terrorist organization structurally inspired by Amway and founded by a used car salesman whose brother returned from Vietnam only to die in a car accident with Snake Eyes. Leading said salesman to hire a string of assassins culminating in Firefly, who went to Japan and killed Snakes Eyes’ and Storm Shadow’s sensei, which led to Storm Shadow eventually joining Cobra. That’s all in the Marvel comics. Also, his top scientist was an insane shirtless, suspenders-wearing dentist in a cape. 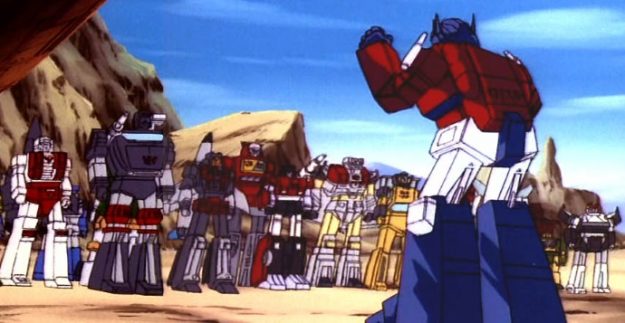 Transformers is a toyline originally consisting of rebranded versions of Tomy Takara’s Diaclone and Microman toys, launched by Hasbro in 1984. Transformers since completely eclipsed Diaclone and Microman, partly because of the popularity of the Transformers cartoon, which launched alongside its own Marvel comic book. The premise of Transformers was developed by Marvel’s then-Editor-in-Chief Jim Shooter and editor Dennis O’Neil The cartoon got multiple spin-offs and reimaginings, including Beast Wars, which was awesome, and Beast Machines, which was Transformers if the Autobots/Maximals were all giant hippies. Also, the cartoon continued in Japan as Transformers: The Headmasters and Transformers: Super-God Masterforce, which is the greatest name for anything ever.

Transformers are a race of sentient, transforming cybernetic life forms from the planet Cybertron. Tens of millions of years ago, they split off into two warring factions, Autobots, and Decepticons. Despite the branding and imaging issues, the Decepticons became pretty popular. Cybertron was lost in the war, and an Ark filled with Autobots travels to Earth where it crashes in prehistoric times. They wake up in the near future of the 1980s, where they find some Decepticons, and they start fighting again because everyone needs energy in delicious cube form. Also, all Transformers were created along with Cybertron itself by the machine god Primus, presumably before his break-out album Sailing the Seas of Cheese. The Transformers were also created by the Quintessons, which were big angry floating alien heads.

Now that you’re caught up, we can talk about how these worlds have crossed over repeatedly. 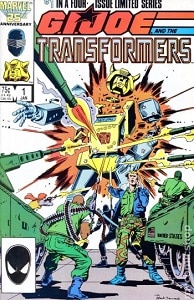 IDW isn’t the first publisher to have both the Transformers and G.I. Joe licenses and decides to make them fight. Marvel did it 30 years ago in the G.I. Joe and the Transformers four issue mini-series. Autobots and G.I. Joe joined forces to stop the Decepticons and Cobra from getting control over a nuclear power station. It wasn’t the most interesting story, but it was the first appearance of the plane combined force Superion!

Marvel had G.I. Joe and Transformers clash again in 1993 with G.I. Joe #138 through #142. Megatron was attracted to Cobra Commander’s Silent Castle base because he thought it was a Transformer because it’s a goofy mechanical castle that can transform. This arc marked the return of Transformers to comics in Transformers: Generation 2, which also marked Hasbro bringing the toys back in the 90s after not doing much with them for a few years. 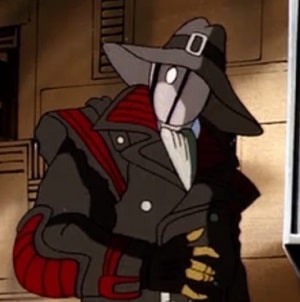 Blink and you’ll miss it, but Cobra Commander appeared in the Transformers cartoon’s third season episode “Only Human.” In the dark future of 2006, Cobra Commander dressed like Rorschach and went under the name “Old Snake.” He worked as a freelance terrorist, serving a crime boss who wanted Transformers technology. He was thwarted because even with decades of experience animated Cobra Commander isn’t nearly as competent as comic book Cobra Commander (not counting the deliciously brutal Cobra Commander in the Warren Ellis-written G.I. Joe: Resolute miniseries).

It’s not spelled out, but the recurring character Marissa Faireborn in the Transformers cartoon is probably the daughter niece of Sgt. Flint and Lady Jaye. Flint’s name is Dashiell Faireborn, which explains why he asks people to call him Flint.

If continuity isn’t weird enough, according to the G.I. Joe Wikia, Sci-Fi can be caught watching the Transformers cartoon on a TV in the second season episode “My Brother’s Keeper.” 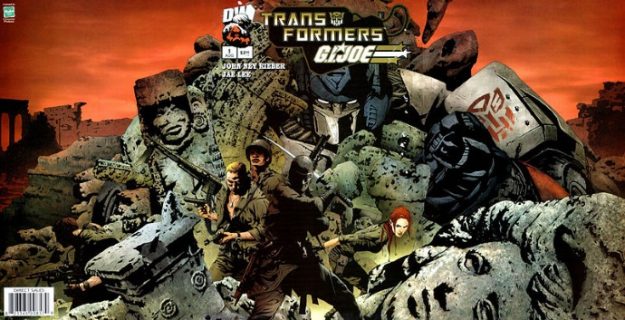 While Dreamwave had the Transformers license, Devil’s Due Publishing had G.I. Joe for most of the aughts. The Devil’s Due books continued where the Marvel G.I. Joe comics left off and were reconnected in 2010 by IDW, which also wanted to continue where the Marvel comics left off. And yet, none of the G.I. Joe comic continuities are remotely as confusing as Transformers‘ continuities. There are multiverses out there watched by ancient proto-Autobots like they’re channel surfing.

Even the Toys are in on it

Hasbro itself isn’t above mixing G.I. Joe with Transformers, but it usually saves those toys for the die-hard fans. Most Hasbro crossover toys are convention-exclusive releases or reserved for members of collector clubs, like this two-pack of Soundwave as a H.I.S.S. tank and Powerglide as a Rattler (with both Cobra and Autobot decals, because he’s on a spy mission) with Scarlett and Zartan. Previous convention exclusive toys include Starscream as a Skystriker with Cobra Commander, Shockwave as another H.I.S.S. tank with Destroy and a Construction B.A.T., and Jetfire as a Skystriker and Hound as a V.A.M.P. with Ravage, Snake Eyes, Baroness, and a three 3/4-inch action figure version of Bludgeon.

The exclusives for the G.I. Joe and Transformers Collector’s Clubs are even deeper cuts. We’re talking Old Snake and Dr. Biggles-Jones (from the second Marvel crossover) cuts. And Old Snake’s figure looks almost as cool as Destro’s leopard-print cowboy convention exclusive figure. Yes, that was a thing. 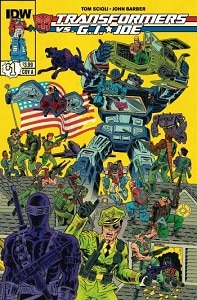 IDW has been publishing Transformers comic books since 2005, and G.I. Joe books since 2010, and they’re pretty damn good. Transformers under IDW has gone pretty deep into the social and political origins of the war between Autobots and Decepticons and explored how Transformers from all sides dealt with the end of the war and actually trying to rebuild Cybertron.

Transformers and G.I. Joe has had a few crossovers under IDW before the launch of Revolution and the Hasbroverse. In 2011, the Infestation event had zombies invading the Transformers, G.I. Joe, Star Trek, and Ghostbusters universes. More notably, Transformers vs. G.I. Joe pitted human against Cybetronian in a two-year maxi-series that took place in its own continuity outside of IDW’s other books. 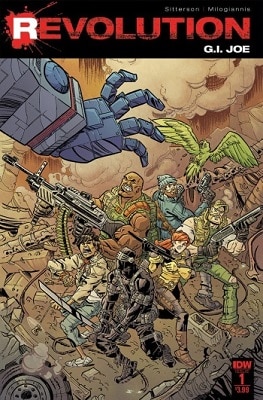 It’s comic book universe pseudo-reboot time, but you don’t have to groan because it’s actually going to make most of IDW’s books more cohesive. Instead of sitting in a bunch of disparate universes ready to be invaded by zombies, G.I. Joe and Transformers now live in the same comic book universe, along with Micronauts, Rom the Spaceknight, and M.A.S.K., which stands for Mobile Armored Strike Kommand and is one of the few examples of K replacing C at the start of a word not written by Ed Boon. Oh, and Action Man, which actually was the European name for G.I. Joe before it became its own franchise.

Instead of a universe-resetting explosion, Revolution simply brings all the threads of the IDW’s Hasbro franchises together and establishes that they live in a shared universe and not different dimensions now. It’s the rare case of a retcon that builds continuity instead of undoes it. None of the IDW G.I. Joe or Transformers main series lore is undone, simply merged into one world where they can regularly interact.

Revolution brings the world under attack by Dire Wraiths, long-time Transformers enemies with origins in the Marvel universe (they were originally Skrull offshoots). In fact, Revolution is somewhat similar to Marvel’s Secret Invasion event, but with giant robots fighting and way better villains involved.

The aftermath of Revolution puts all of the pieces together, with G.I. Joe as the “Crown garden gnomeel of the Hasbro Universe.” The Joes are largely the same in spirit, but now Scarlett is the leader, and ex-Decepticon Skywarp is a member. Skywarp was the teleporting taxi drivers of the Decepticons, but between being used only for transport and seeing the combiner technology Galvatron used as an affront to the ideals of Cybertronian purity, he quit. Now he’s the Vegeta of the Joes.