The above image is not an old photo of a street. It's Grand Theft Auto V.

You may well remember Gareth Damian-Martin's stunning shots of Metroid Prime, originally taken for his digital zine Heterotopias. Beautiful video game screenshots are ten-a-penny, but Damian-Martin's work is something quite different - not least in the fact they're taken using an analogue camera - in looking to capture not just a specific image of a game, but the nature of that place. To catch some of that ambiguity around the edges that, in the memory, hazes over beloved places and almost makes them seem like they exist.

Following the production of three issues of Hetertopias, Damian-Martin is moving on to an even bigger project: "a unique collection of 35mm analogue photographs of digital cities" called The Continuous City. The book will feature photographs of games from Dark Souls to Mirror's Edge, a sample of which can be seen throughout this article. I asked Damian-Martin to explain what distinguishes his approach, and results in such striking images.

"I'm not so much trying to showcase the technical aspects of the art of the game but instead, I'm using its world as a staging ground for creating new art works," says Damian-Martin. "I'm not interested in replication or even fidelity, but am instead interested in memory, atmosphere and evoking how we experience these spaces. I think a lot of game photography feels very divorced from the experience of exploring and existing in game spaces - using photo modes, camera hacks and noclip cheats to get perfect angles and unique perspectives. To me, game spaces can often feel startlingly real, and they can often enter our memory as if they were real spaces. My use of analogue photography is my way of engaging with that. It allows me to break the game world away from its typical associations and have people re-encounter it in a totally new way."

There are some nice ironies to unpick here, not least the fact that Damian-Martin's method more accurately parallels a player's perspective of looking at a screen, rather than the 'saved screenshot' which exists divorced of all context. That's not to say these photographs show the edges of the television or anything quite so hokey, but Damian-Martin's point about 'normal' game photography is a good one - what relation does an F12 screengrab bear, really, to the experience of playing that game? What about when it's from an angle you'd never see as a player? This is not to denigrate one technique in favour of another, simply to point out their characteristics.

The biggest factor in the 'look' Damian-Martin achieves is his use of cameras and projectors, so I ask about his method - which effectively is about making digital images look non-digital.

"I use a DLP projector connected up to a console or PC and a projection screen," says Damian-Martin. "I then photograph the game as it's projected on the screen using two different 35mm cameras and a very high ISO black and white film stock. The reason for this is that photographing a game from a screen would mean the image is broken down into RGB pixels creating a 'screendoor' effect across the image making it obviously digital. The interaction of the soft DLP image and the heavy grain of the 3200 ISO film stock I use is what creates the strange reality of the images - our minds automatically fill in the detail that the grain suggests, making the image feel more real than it does in the game."

Ever tempted to use digital tools? "Some people ask why I don't just digitally 'age' game screenshots with grain and imperfections but for me the generative nature of film grain and imperfections is impossible to imitate. The two cameras I use have been in my family for 50ish years, they were used by my father and grandfather, and at this point they have a unique signature of light leaks and imperfections. To me this is what makes analogue photography irreplaceable. If you look at the photograph of Dunwall's skyline it almost decays completely into the grain of the image, and yet in that grain the shapes and shadows seem to point to a complexity of forms and stories hidden in the city. Its a process I love, and one I feel adds to images rather than limiting them." 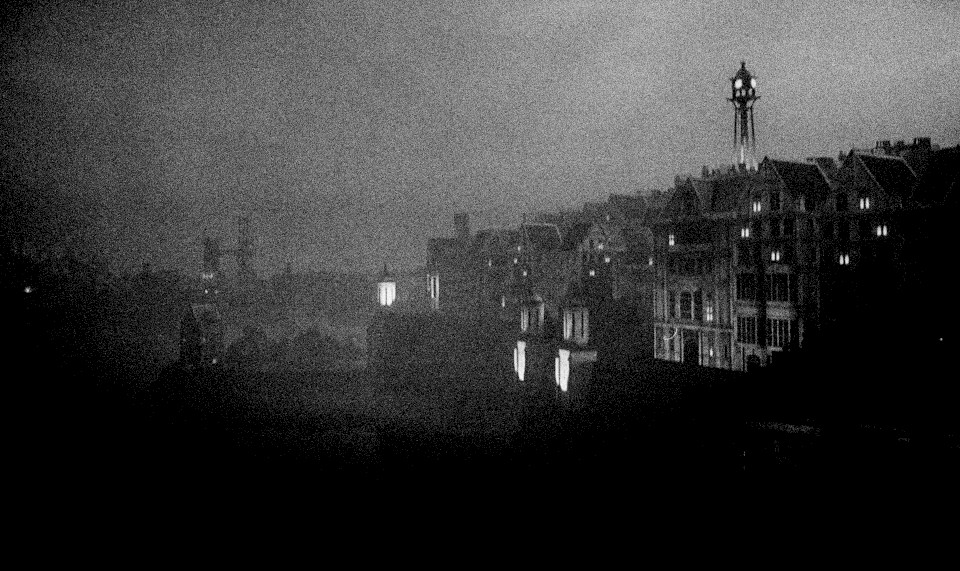 A wide range of games will be included in the final book, so I wonder what's bringing them together. What connects these spaces?

"I'm focusing on 3D games so there is a certain unity that comes with that," says Damian-Martin, "but on top of that I think I have been focusing on cities that have been meaningful and memorable to people. I think there are game cities which go beyond just laying out urban space, and gesture towards other realities. In those cities, Dunwall or Rapture perhaps, we always feel like we are seeing a fragment of something bigger, something unknowable. This quality is something I very actively look for in my urban subjects."

Finally the title, an echo of one of the seminal works about urban spaces. "The Continuous City is something I borrowed from the writer Italo Calvino and his book Invisible Cities. Calvino's work is deeply connected to the idea of cities as arguments, ideologies, memories and characters rather than just urban spaces." There's an extract from the book itself on the Unbound page which goes into more detail:

Calvino rightly casts them as political, philosophical and personal symbols, able to describe almost all aspects of society. I suppose what I might be proposing with my own book is that games, and especially game cities, share this property. Like the word city, which uniquely unites many disparate elements in an ungraspable whole, so game points a thousand different definitions of space and systems all within one category. Games and cities then are platforms through which to make arguments about space, about society, and about how images shape the way we encounter the world.

What can I say except: this guy's work is great. Surely we all, outside of the specifics, know that feeling of reconstructing a once-loved virtual space in memory - and sometimes, going back to discover a very different reality. The difference between what something was, and what we've subsequently imagined it to be. That's just one thread of these photographs which, outside of their sheer beauty, are showing us places we know in a quite different way, which in turn makes you ponder just how you know them. There are a lot of video game books around these days, but this is one that deserves a look.