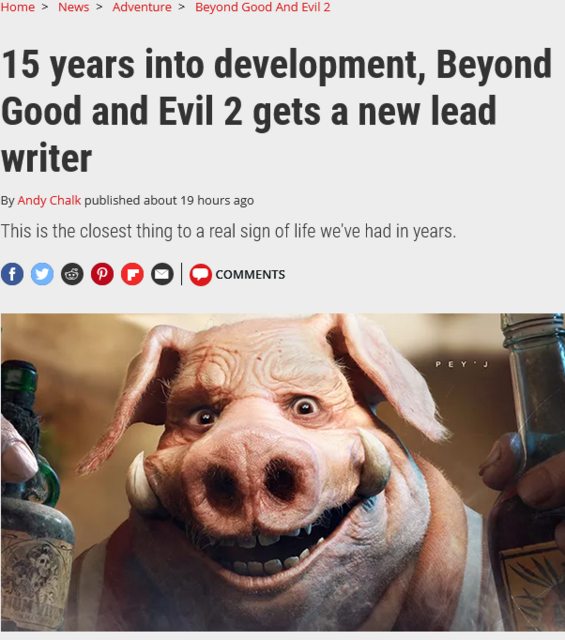 >Prior to the move to Ubisoft, Arellano was the narrative designer on Super Evil Megacorp's 2015 MOBA Vainglory (opens in new tab). Her LinkedIn (opens in new tab) account indicates that she also served as a writer at Deep Silver Volition (her Twitter account says she worked on the Saints Row reboot), and as a narrative designer on World of Warcraft at Blizzard.
>"We are very happy to welcome Sarah who is one of the latest recruits on Beyond Good and Evil 2," a Ubisoft spokesperson said in an email sent to PC Gamer.
>"The development team is hard at work to deliver on the promise made to its community."
>As for what it means for Beyond Good and Evil 2, that's anyone's guess at this point.
>The hiring of a new lead writer is the closest thing to a real sign of life we've seen in years (and the Ubisoft rep noted that the company is hiring for other positions at its Montpellier studio (opens in new tab), which is working on the game), but it's also easy to view it as a sign that the whole thing is mired and may well be starting over.
>That's obviously not a great place to be after 15 years of supposed work.