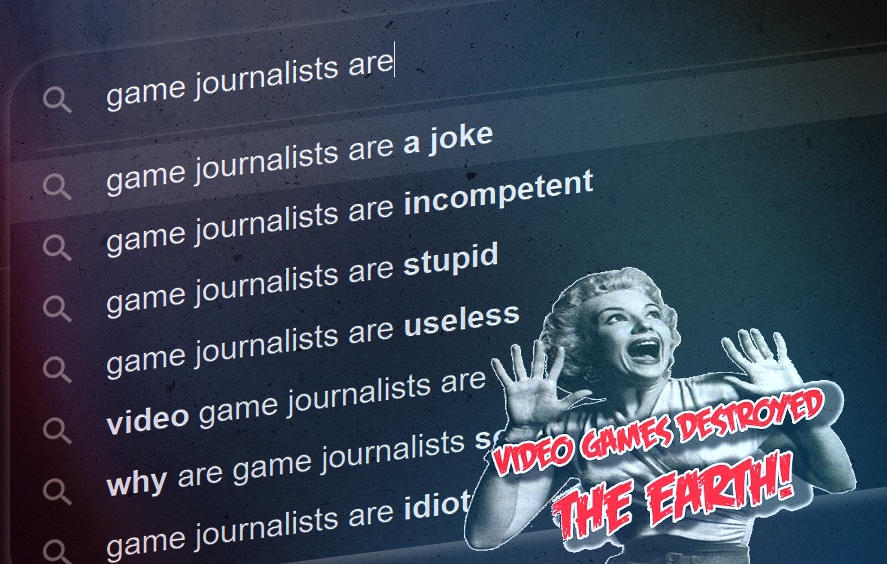 Game journalists, you're not the first to notice, are increasingly out of touch with the game-playing masses, yet there is no end in sight on their wailing about game difficulty or their transparent demand for art to conform to the demands of that very particular brand of corporate endorsed Woke (tm) Social Justice (tm) ideology. Given how well-trafficked their ideas are on social media, you can’t be blamed if you fall under the impression that games themselves are becoming more political — or politically correct.

But the market speaks louder than words, and no amount of digital paper and wasted ink promoting a left-leaning narrative can change the fact that video games, designed as they are, are enjoyed by the masses precisely because they are what they are: immersive, challenging, and barely political. What politics are there in Fortnite or Minecraft beyond promoting the inherent truths of “skill equals success” and “effort is rewarding”?

These moral arbiters claim that had games serve as a way for gaming enthusiasts to gatekeep the hobby from including a more diverse audience. The complaints hold merit only in the sense that the level of difficulty inherent in most good video games poses a challenge for their crusade to force their political ideas through the entertainment medium.

Politics is downstream from culture, and game journalists — at least those who drive the conversation and not the useful idiots who simply fall in line — recognize this. Those who advocate for dismantling “patriarchal” and “oppressive” power structures direct their efforts to complaining about the difficulty in video games as part of their fight against so-called “Capitalism” with a capital C, and to enable games — at least video games approved by their moral authority — to reach a larger audience if only to ease their efforts at memetic colonization.

It’s no surprise then that Red Dead Redemption 2, an irreverent product from the minds at Rockstar Games, has come under heavy criticism for at least some of its content precisely because it possesses every quality they don’t want to see being promoted — including player choice.

Of course, they can’t let on too much about their beliefs without also outing themselves as being completely out of touch, so they straddle a fine line by complaining not about the game’s general aspects, but about the properties they can single out. They speak of the game’s supposed “toxic masculinity” and its violence predisposition towards women, highlighting the player’s ability to do what he will with a suffragette NPC — a character no more vulnerable or invulnerable than countless other non-player characters present in Red Dead Redemption 2.

The Week complained about the game’s portrayal of women, who are depicted as “weak, submissive, and vulnerable,” according to its authors. Portrayals that, they claim, “can shape gamers’ views of stereotypical gender norms, and negative attitudes towards victims of violence.” Betraying their ignorance of the actual game, the writers say nothing of how the majority of women in the game are only as vulnerable as women are in real life — especially in the Old West era of the late 19th century — or how these women overcome adversity. They say nothing of Sadie Adler’s transformation from a traumatized widow to one of Red Dead Redemption 2’s strongest characters.

In their inability to see the painting for the canvas, theirs is a shallow reading of a complex, and multi-layered story with far more depth than they are capable of swimming in. The piece, like much other pseudo-intellectual refuse, floats in the kiddie pool of thought.

The Week, The Guardian, Eurogamer, The Next Web, New Statesman, Business Insider, The Telegraph, and the countless other publications that complained of the game’s portrayal of women whose extensive complaints about a suffragette and the abuse of that suffragette, made popular by a darkly humorous viral video on YouTube, have all neglected to express any outrage that Arthur Morgan, the game’s protagonist, can be forcefully violated — and that much of it is played for laughs. If the lead character was a female, there would be a massive outcry against the scenario, just as there was with the manufactured outrage surrounding Tomb Raider in 2012, or even the newest game, which had much of its graphic violence censored following a Polygon complaint over the game’s grisly death animations.

It’s an experience traumatizing to the main character, and perhaps even the player (at least to the extent that one can be shocked by a video game) but it’s not something that anyone who’s been clutching their pearls even cares about, or even noticed — which they would’ve, if they actually played the game.

Their other problem with video games is that they reward hard work, promoting meritocratic values over socialist ones. It’s an argument made by Seattle University’s Christopher Paul, who wrote extensively about the topic in his book on the “Toxic Meritocracy of Video Games.” It’s a view that very quickly sums up the mindset of games journalist who adhere to socialist principles, who recognize that challenging video games represent everything from “toxic masculinity” with its power fantasies and the will to power — to “toxic meritocracy,” which promotes a somewhat “selfish” (as opposed to collective) Protestant work ethic incompatible with Marxist ideals.

No more transparent are their efforts to drive the Inclusivity narrative than in Leigh Alexander’s infamous Gamasutra article, which declared “Gamers don’t have to be your audience. Gamers are over.” The piece and dozens of others published alongside it, now referred to as the “gamers are dead” articles, highlighted a cohesive endeavor by the gaming press to manipulate the video game industry into abandoning its primary purpose—to serve as entertainment—to become a means of promoting Marxist ideals in opposition to free market principles under the guise of combating the "toxicity" of "entitled" gamers. 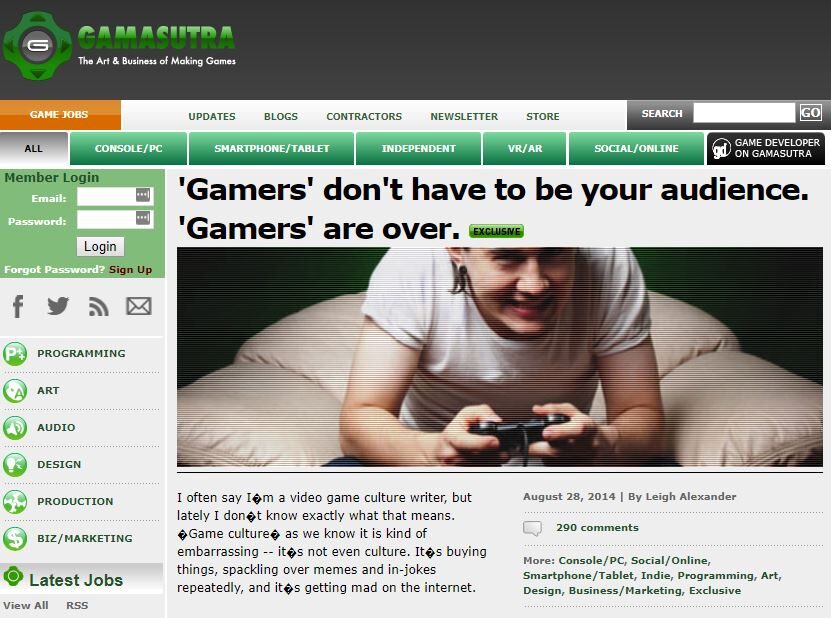 Game journalists succeed in embarrassing themselves by showing how disconnected they are from public consensus in their efforts to complain about game difficulty—using only Dark Souls as their sole reference point for hard games. Their efforts in complaining about game difficulty are present in the glut of reviews about Darksiders III and Spyro the Dragon, two games that are, by accounts of those who’ve actually played and enjoyed them, only as hard as games should be. They are no more punishing than anything old school gamers grew up playing, especially with Spyro the Dragon — a remake of the original trilogy that captured millions of hours of our collective childhoods.

Gamers don’t have a problem with challenge. Game journalists do. Endeavoring to make games more accessible to the public, if only to groom a new audience to their political agenda, these political acolytes the only ones who make their complaints heard and they speak with the fictive authority of being the voice of a silent majority clamoring for Inclusion. Video games, they claim, aren’t equally enjoyed by women because the content is too male-driven, with too much content catering not only to the “male gaze” in terms of visuals, but in being challenging. Women, they claim, prefer to play supporting roles in games, as healers and menders, unlike their male counterparts who play as “carry” classes and damage dealers.

The narrative is one that exists in contradiction to the popular citation of the Entertainment Software Association’s statistic in its 2015 paper on the “Essential Facts About the Computer and Video Game Industry,” which claims that 45 percent of gamers are women. If this is truly the case, then it shows that video games as they currently are need little change to obtain a massive audience of both men and women alike.

The conclusions of this dialectic show that efforts to politicize video games remain tentative as the wallets of gaming enthusiasts speak louder than political propaganda.

“Get woke, go broke” has become a memetic maxim with a mountain of supporting evidence no more evident than in the lackluster sales of Battlefield 5, which attempts to rewrite the history of World War II as an “inclusive” theater replete with female participants on the front lines. The game’s physical sales, according to latest trends gathered in the United Kingdom, a healthy market for the games industry, reveal that EA’s wokest video game to date are down more than 50% on the previous entry, Battlefield 1, which says nothing of how poorly the same is selling compared to its closest competitors, Call of Duty: Black Ops 4 and Red Dead Redemption 2.

The free market has spoken, and it doesn’t want entertainment warped by a political agenda.